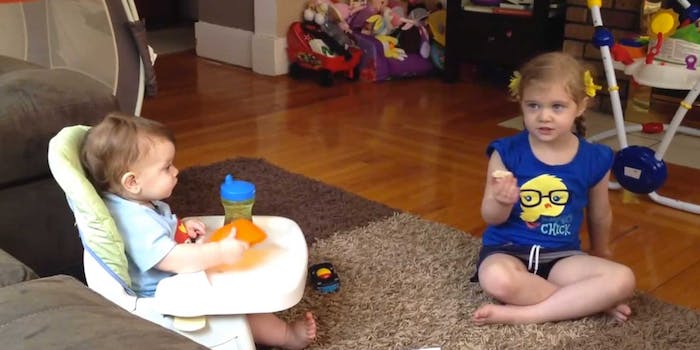 This 4-year-old girl will school you in Marvel trivia

If Stan Lee is looking for a continuity editor, he might want to sign up 4-year-old Mia Montross.

If Stan Lee is looking for a continuity editor, he might want to sign up Mia Montross. He’ll have to wait a few years, though: Child labor laws might not let him hire a 4-year-old.

“Every day she is filled with wonder and a lust for knowledge,” Montross wrote. “Whether it be correcting me on the type of butterfly we’re seeing or reminding me of a joke that I told her once a year ago… she constantly surprises me.”

But it was a family car trip to the toy store with her parents and her 1-year-old brother, Jack, that showed off the 4-year-old’s comic book knowledge to the world and put many adults—even our super-nerdy staff—to shame.

Montross’s wife, Sherri, filmed Mia correctly identifying 23 characters in the Marvel universe, ranging from the God of Thunder to the owner of the Infinity Gauntlet.

Sometimes Mia needed a hint from her dad, but she always got the correct answer in the end.

“This is ridiculous!” Sherri exclaimed at one point.

Skeptics may argue that you could find many of these answers in recent film adaptations, but some of the superheroes she knows—such as the Scarlet Witch—have yet to appear on the silver screen.

Just when you think the video can’t get any more adorable, Mia signs off by singing part of the Super Hero Squad theme song.

Montross told the Daily Mail that Mia’s love of comic books grew after she watched an episode of Spider-Man and His Amazing Friends. She also watches “easily digestible” TV shows and reads the occasional comic book and graphic novel.

Comics aren’t her only interest. Montross noted that Mia wants to be a ballerina or tap dancer when she grows up. For her part, Mia says she just wants to play with Barbies when she’s older.

“Do you think that’s a reasonable job?” Montross asks.

“I mean, when I’m 10,” she answers as she continues to eat her cupcake.