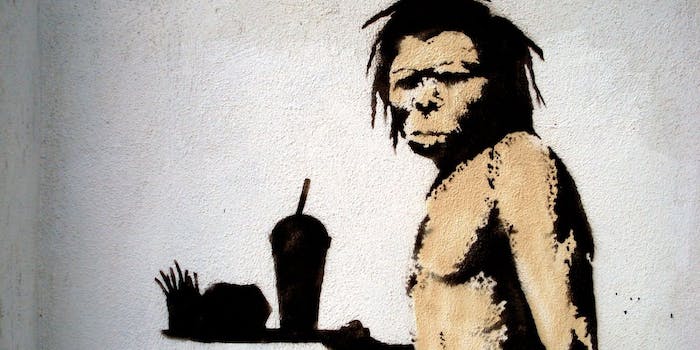 Cavemen ate carbs: Paleo and 4 more diets that got it wrong

Put down the lettuce-bun burger, warriors—it turns out your Paleolithic predecessors aren’t quite who you thought they were. You ready for this?

The Paleo Diet, a staple meal plan of the hyperfit, has long attributed its results to its high-protein/high-fat, low carb system, rooted in the idea that humans were hunter-gatherers, and we therefore needn’t rely on post-agricultural foods to get shredded. But a recent study from the University of Chicago indicates that root vegetables, such as potatoes, were largely responsible for human brain growth over the course of 3 million years, discrediting a the basic tenet of the Paleo Diet: As the cavemen did, so must you.

This earth-shattering news has made quite an impact on CrossFit franchises across the U.S., and it prompts us to question which other popular diets have gotten it so wrong.

U.S. News & World Report hails DASH as the number one overall diet over and over. The diet focuses on moderation in order to reduce cholesterol and blood pressure, and it puts added emphasis on reducing salt intake. However, recent studies have shown that salt no longer has the same impact on blood pressure once though. In fact, researchers found that 100 percent of people who eat salt in moderation will die. Sorry.

The most popular and most misused diet in America, Weight Watchers is built on a point system. WW dieters are encouraged to eat a anything they want, so long as they tally the points. Many, however, have tallied the PointsPlus system the same way they would a golf tournament—the fewer the better. The company just released a statement, however, clarifying that the “PointPlus system is about extreme competition. The highest score wins. So far, we have yet to reach our point threshold to crown a victor.” So rack ‘em up, you watchers of weight.

Similar to Paleo, the Atkins Diet eschews carbs in favor of the high-protein fix. The only difference is you can eat fun foods like peanuts and beans! But Atkins eaters not so privy to meat consumption commonly forget that heavy salad dressings can easily function as a protein substitute. Toss your guilt out the window and douse that lettuce with Thousand Island! Practitioners were also once encouraged to kill cannibalize anyone with the surname “Atkins,” which, on balance, turned out to be illegal.

So get back out there! With these modifications to your diet, you’ll finally get the body you want in no time! Or ruin it forever. It’s like 50-50 odds.