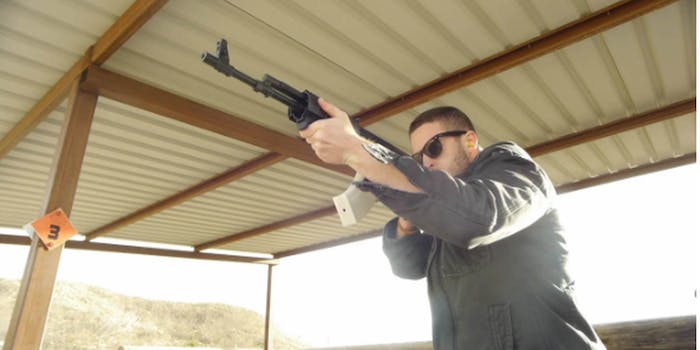 This is the prototype for the world's first gun made entirely from 3D printed parts.

If 25-year-old Texas law student and one of the “most dangerous” people in the world Cody Wilson is right, next week you will be able to go to his website, download a file, and print out a fully functioning plastic gun. It’s called “the Liberator,” and like everything else Wilson’s nonprofit, Defense Distributed, has done, it’s going to change the conversation on gun control across the world.

Until recently, Wilson and his group has focused largely printing gun components, and especially the lower receiver for an AR-15 assault rifle. That component holds most of the working parts of the gun, and Wilson’s small team had seen serious progress in recent months as they refined the design. In April, the group released a video showing an AR-15 equipped with its plastic, printed lower receiver firing off more than 500 rounds. The Liberator will be the first gun made entirely from 3-D printed components.

WIlson revealed the details of his latest project to Forbes‘ Andy Greenberg earlier today (click through to see the photographs).

All sixteen pieces of the Liberator prototype were printed with a Stratasys Dimension SST printer in ABS plastic, with the exception of a single nail that’s used as a firing pin. The gun is designed to fire standard handgun rounds, using interchangeable barrels for different calibers of ammunition.Technically, Defense Distributed’s gun has one other non-printed component: the group added a six ounce chunk of steel into the body to make it detectable by metal detectors in order to comply with the Undetectable Firearms Act.

Wilson, a self-described crypto anarchist, wants to obviate the very concept of gun control. How do you limit the proliferation of guns if everyone has the means of production in their own home?