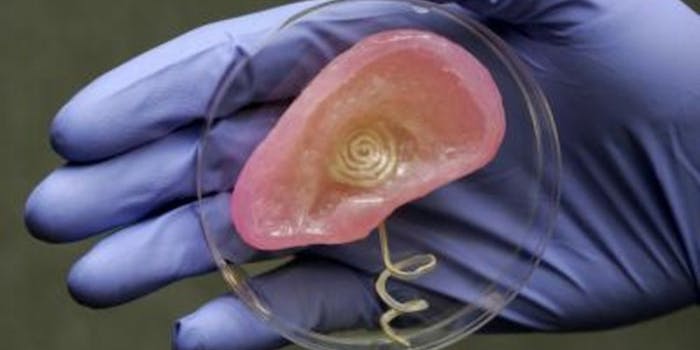 This 3-D-printed ear can restore the sense of hearing

Researchers at Princeton suffessfully printed a bionic ear with ribbons of wire that attach to a person's nerve endings.

A team of mad scientists hiding an ivory tower successfully 3-D-printed a bionic ear that can restore the sense of hearing for the deaf. The ear’s shaped like a human ear, for the most part, but the ribbon of wires that come out the back and attach to a person’s nerve endings confirms that it’s anything but. It is part of a much bigger plan, though. And get this: It even picks up radio signals.

Researchers at Princeton recently unveiled this bionic ear as the latest bit of progress in their greater ambition to build spare parts for would-be human cyborg. The ear takes advantage of a new polymer-based gel that’s partially made up of calf cells, and it can ostensibly be used for other parts as well. Michael McAlpine, an assistant engineering professor at Princeton and the mind behind the ear, has sort of made powering electronics with human motion his life’s work. He’s not the only one working on integrating electronics into the human body, either.

For the past few years, there have been myriad breakthroughs in cyborg-like technology. Prosthetic limbs have been becoming incredibly sophisticated, having leapt from wooden leg territory to the age of mind-controlled limbs. This has been coupled with 3-D printing moving from the fringes and into the center of innovation in manufacturing all kinds of things, from guns to organs. Anybody who understands the very basics of anatomy could assemble an entire body from these printed parts and robotic arms. All it would take is a lightning bolt to jolt him to life!

But before I trip and fall too deep into that easy Frankenstein metaphor, let me point out that there is progress being made in connecting machines to our body. Cochlear implants, one of the first cyborg-like technology, are fairly mainstream now, and the technology behind bionic eyes is getting pretty good. Scientists are even working on a method for powering electronic devices not just using human motion but the human body itself. Yes, that is the premise for the popular 1999 movie The Matrix, and no, it probably won’t ever happen.

For now, we’ve got a weird looking ear, an incredible brain-controlled robotic arm, countless different models of cyborg-like prosthetics and a whole lot of ambition. One day a bunch of mad scientists probably will build a cyborg. Good luck, future mad scientists. Be sure to watch, well, pretty much any science fiction movie with cyborgs in it before hitting the “on” switch.