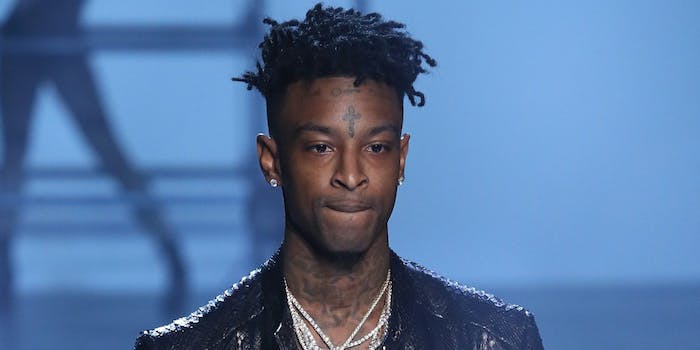 On Sunday morning, U.S. Immigration and Customs Enforcement (ICE) arrested rapper 21 Savage, claiming he was in the country illegally. Authorities say the Grammy-nominated rapper, whose real name is She’yaa Bin Abraham-Joseph, was born in the U.K. and first entered the United States legally in 2005 when he was a minor, but his visa expired in 2006 and he never left.

“Mr. Abraham-Joseph is presently in ICE custody in Georgia and has been placed into removal proceedings before the federal immigration courts,” ICE said in a statement released to CNN. “ICE will now await the outcome of his case before a federal immigration judge to determine future actions.”

As shocked as people were by the arrest, there was another fact they found almost as surprising. 21 Savage is so closely associated with the Atlanta hip-hop scene that his fans couldn’t believe he was actually British. While his dentition and possible deportation is no laughing matter, people couldn’t help but find some humor in his country of origin.

21 savage is now 9.525 savage I converted it to the metric system for him

when 21 savage said “five-foot-five, she my ride or die” this who he meant pic.twitter.com/5X1Ytwes4g

21 Savage when he says he's gonna pull up pic.twitter.com/kf9qRHhXwH

21 Savage when he says he’s in the booth pic.twitter.com/tEDsSZ4TLJ

While some of these memes and tweets are undoubtedly funny, people are questioning the morality of having a laugh at someone who might soon be taken away from his family.

Fellow rapper Wale took issue with the memes, specifically calling out singer/actress Demi Lovato after she tweeted “So far 21 savage memes have been my favorite part of the Super Bowl.”

“Why is somebody freedom funny,” Wale commented when retweeting her post. “I don’t get the joke.”

Why is somebody freedom funny … I don’t get the joke https://t.co/Eyf4clympS

Others soon piled on Lovato, bringing up her struggles with drug addiction. She responded by saying, “If you’re gonna come at me for making a joke, try coming at me with some original not involving drugs.” She later deleted her Twitter account.

Many people agreed with Lovato, pointing out that she was only laughing at memes that Twitter had been sharing all day.

“Wasn’t laughing at anyone getting deported. I know that’s not a joke… not have I EVER laughed at that,” Lovato wrote on her Instagram Story. “The meme I posted/was talking about was of him writing with a feather pen. Sorry if I offended anyone. But it’s no excuse to laugh at someone’s addiction let alone their OD.”

Wale replied, saying “Still ain’t gon disrespect you .. still praying for you Demi. Glad you seen my old tweets. Hopefully you seen the ones providing comfort and prayer when you were down. I don’t kick people when they down. Go queen.”