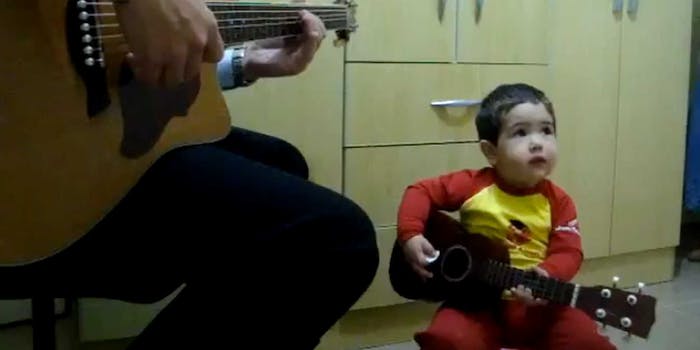 This 2-year-old is the next John Lennon

Just watch Diogo Mello strum his ukulele and sing "Don't Let Me Down."

If you’ve ever lost faith in younger generations over their taste in music, introduce them to better tunes at a younger age.

The 23-month-old joined his father, Christian Diego Mello, for an awe-inspiring rendition of the Beatles’ “Don’t Let Me Down.”

He might not know all of the chords just yet, but Mello’s got him covered.

And he definitely knows the words.

Diogo and Mello alternate singing on the verses. Although Diogo sometimes appears more interested in dancing with his uke instead of strumming it and occasionally needs a little help from his father, you can’t question his enthusiasm when it’s his turn to sing.

Mello couldn’t be more proud of his son.

“ALL COMMENTS ARE BEING READ AND THAT FILLS ME OF HAPPINESS AND PRIDE.