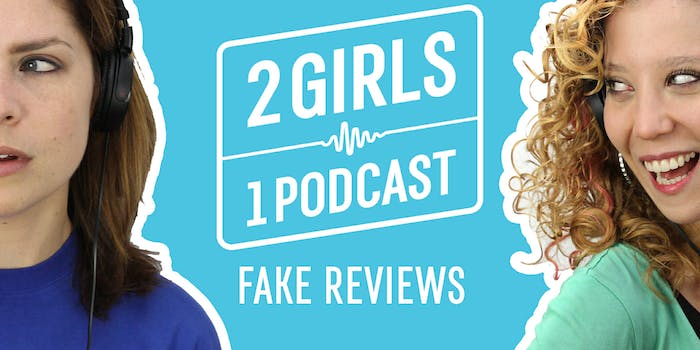 'Maybe we trust what we read online more than what we put in our mouths.'

When Oobah Butler was hard up for cash, he found a gig writing fake reviews for London restaurants he’d never been to. He fell into an abyss of forgeries on TripAdvisor that gave him an idea.

What if he invented a fake restaurant, powered by more fake reviews, to fool everyone? The performance art stunt took on a life of its own, compelling him to have a fake grand opening of The Shed, London’s No. 1 restaurant on the Internet—which served microwave meals in Butler’s backyard.

The ultimate “Emperor’s New Clothes” story propelled Butler to worldwide fame, where he continued to trick the media by hiring actors to portray him in interviews.

This week on 2 Girls 1 Podcast, Alli and Jen (actors who perform weird internet stuff on stage) have a long talk with Butler about why the anonymity of the internet makes people so gullible.

This week’s episode is supported by Penguin Random House Audio, which publishes thousands of award-winning audiobooks every year, including some great holiday suggestions like Harry Potter, Crazy Rich Asians, and fun listens by your favorite comedians. Download Penguin Random House Audiobooks wherever you listen to your favorite audiobooks (Audible, Amazon, Barnes & Noble, etc.) or check out this page to browse the latest selections.