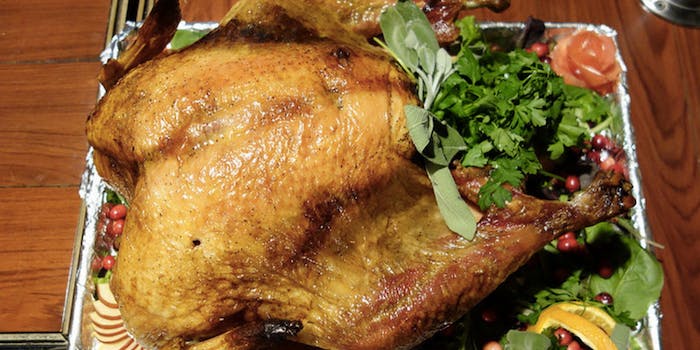 We are truly blessed.

Thanksgiving is a time to celebrate the things you’re grateful for while unfortunately reinforcing a white supremacist narrative of American history. Because on the DL, the holiday more or less celebrates the genocide of the Native American people.

Thanksgiving is also a time to argue with shitty family members who support Donald Trump and hate gay people, overeat to the point of hating yourself, and send regrettable drunk texts to your high school ex who’s back home for the long weekend with his new wife.

It’s the most wonderful time of the year.

As the world’s leading authority on Twitter, I’m mostly grateful for Twitter this holiday season. Lately I’ve been meeting new lovers and making new friends off the site. It’s dope, and I’d highly recommend it.

Twitter is also responsible for at least half of my LOLs, so here I present to you, the top 14 Twitter accounts I am most grateful for—plus a sampling of their finest work.

Yo give it up for the stock market, a fake thing we created that periodically ruins everyone's lives.

are you there God *airhorn* it's ya girl

*the one direction guyes break up*
so it is agreed. we wil go our separate ways. good bye.
*they all start walking in the same direction*
no

a big thing i look for in an exercise routine is for it to be over.

Dystopian novel in which someone must trade all their social media followers for just having a nice life.

just had the horrifying thought that if there was an apocalypse all the gifs would probably just keep moving for the rest of eternity.

Let’s all raise a glass to strangers who make the Internet seem worthwhile. And remember: