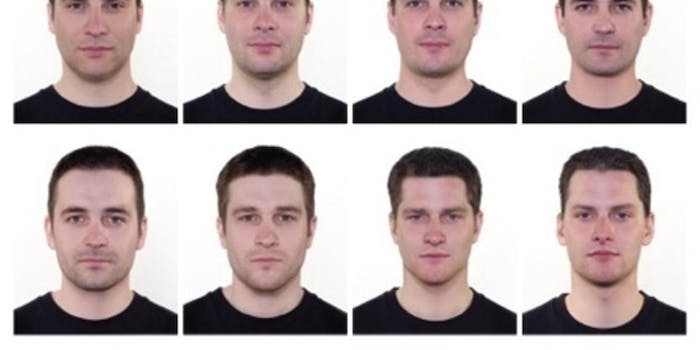 Three years ago, 12 members of an art collective lived under each other's identities.

A dozen men morphed into each other three years ago, and you probably never even heard about it. Their story is now being told at Cultural Hijack, an exhibit underway in London that surveys the “provocative interventions which have inserted themselves into the world, demanding our attention, interrupting everyday life, hijacking, trespassing, agitating and teasing.” And that’s a fitting description of what the Czech art collective Zthoven did in 2010.

Basically, 12 members of the collective swapped identities, snagging themselves digitally altered ID cards that featured blended images of their portrait and another person’s. Make Money Not Art explains further: “With the same haircut, twelve members of Ztohoven took a portrait pictures and using the Morphing software they merged every two faces into one. They applied for new IDs with these photos, but each of them used the name of his alter-ego.” 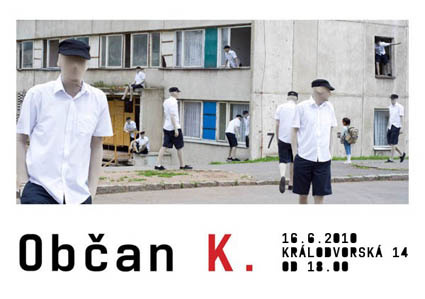 For six months, they then lived under each others’ identities, purchasing guns, voting, and even getting married. They documented the entire project, which, in a nod to Kafka’s identity-thieved Josef, they called Citizen K.

After the six months were up, they publicly exhibited their work in a gallery in Prague. Apparently, the state didn’t find their work amusing—it wasn’t long until the cops showed up. According to a local Czech newspaper, “On Friday 18 June, police rushed into the public exposition, collecting the fake IDs displayed there and arresting Roman Týc, the most famous member of the group noted for hacking into a public service TV program with a video montage displaying what looked like a genuine nuke explosion in June 2006.”

So yeah; Zthoven had a history of cultural hijackings. They’ve turned this one into a film, and they’re screening it in Europe. On its website, Zthoven describes the Citizen K undertaking as a political act:

I have returned from places where I beheld myself and realised that it is mainly us that matters! We are all a society, we all create the system and we watch one another. We are all involved in the fear that keeps us at a standstill. For all of us I entered the places that others fear to enter and perceived the vanity, the absurdity of obedience. How frail and how easily abused is that which should serve us. We are not numbers, we are not biometric data, so let us not be mere pawns in the hands of the big players on the game board of these times. If we do not wish to fear our own face, we must save it!