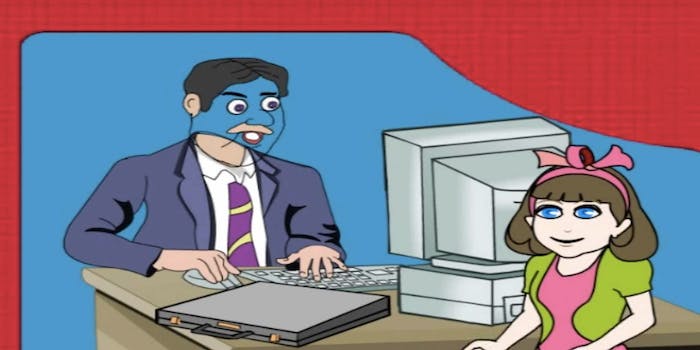 Every parent of a toddler is guilty of using YouTube as a babysitter. Just plop Junior in front of an innocuous, low-budget rendition of “The Wheels on the Bus,” then go to the bathroom or finish the dishes. Minutes later, you pass your open laptop you notice that everything has changed. There is something totally wrong with the video your kid is watching—demented puppets, freakish soundtrack, deranged message—and you let it happen.

The good thing is that your child is young and may not notice. You, however, are now totally skeeved-out and will experience nightmares later. To save you the sense of creeping terror, we rounded up 11 of the most bizarre and disconcerting kids’ videos ever made. Avoid them at all costs. Take my advice: I know these videos only because my kid and his friends have all seen them.

As these dead-eyed moms bounce emotionlessly on the bed and fall one by one to the carpet, I can’t help but worry about the baby who is forced to call the doctor over and over. Is that baby the caretaker for those “strict” mommies? Are they getting their comeuppance for being strict? Why hasn’t the doctor called the police?

I showed the video to my son, Harvey, age 2 and a half. (Please don’t call the cops on me.) He covered his eyes each time a mommy’s head hit the ground, but otherwise, he liked it.

The blank look in Mom’s eyes when her skull hits the floor.

Shivers down your spine.

Rather confusing song lyrics aside (why shouldn’t a rabbit eat carrots?), the freakish animation and character design push the level of unease to “Dear God, turn it off!” by the time the dog in a cowboy hat is discovered eating a chicken leg behind a shed.

A review from Ulysses, age 2: “That was silly.”

Besides the soulless laughter of each character, the shapely thighs of Johnny and the mouse.

Gritting your teeth and backing away slowly.

This video seems perfectly fine until a smaller version of the veggie’s own face grows out of a finger on his or her hand. Julian, age 3, was a big fan of this video and asked to watch it again. Simon, age 3.5, was also a fan, even though his mother felt personally uncomfortable about the “cascade of cutting and cooking implements in the background.”Most disturbing moment:

Their faces grow out of their hands!

Leaving the lights on tonight.

Starring a placid frog puppet from hell, this video reveals the alphabet to be a satanic incantation. Do not play this video three times; I don’t know what you might conjure. Simon watched the demon frog with wide eyes and a frown on his lips. Ulysses declared it “scary.”Most Disturbing Moment:

That fucking frog. What is happening?

When I saw the curtain pull back to reveal a clinically depressed pear, a few sad butterflies, and a creeping worm, all to the strains of the disheartening soundtrack from the frog video above, my heart began to cry. Julian responded by actually crying. He told his mom, “I don’t want to watch this.” Harvey worriedly pulled his blankie closer for comfort.Most Disturbing Moment:

Everything. Also the eyelashes.

Pancake Manor has a lot of videos on YouTube starring these two misshapen puppets whose faces equally repel and attract, like a car crash. The orange “not-Bert” one looks like Sloth from The Goonies but without the friendly personality. The purple “not-Ernie” fellow’s eyes are pointed in two different directions, yet both gaze directly into my soul.Most Disturbing moment:

Even if you can make it through the normal alphabet, watching the “sound them out” section is what being insane must feel like.

All your hair standing on end.

A poor attempt at teaching opposites goes from off-putting to insulting to outright alarming. The nightmare fuel starts around the one-minute mark as the creator attempts to illustrate “bad” as a red-eyed child chanting manically at an elderly gentleman, and the video peaks by daring to juxtapose “pretty” (a woman) with “ugly” (a hairy, homeless man sticking his tongue out lustily). I implore you to watch the whole thing, if for no other reason than to explain the “deep” and “shallow” imagery to me.Most Disturbing Moments:

Everything after 1:11, starting with that “bad” child.

Closing your eyes and hoping it just goes away.

Clearly a scene cut from a longer piece, this animated horror movie scene from the classic fairy tale of Little Red Riding Hood features overly dramatic readings and music, as well as the most frightening attacks on Little Red and her granny that have ever been depicted. I did not subject any toddlers to this video—that’s how awful it is.Most Disturbing Moment:

When the wolf pounces on Red Riding Hood.

Hugging yourself to feel less alone.

I learned a lot from this video. I learned that being a physician means sitting at a table with a book marked “Physics,” that electronics means getting yelled at by your mom for burning a shirt with an iron, and that pacing in children’s videos doesn’t matter. All these things were merely amusing. Then a man with no face appeared and I started shrieking.Most Disturbing Moment:

Shaking your head “no” over and over.

Wise Owl may know a lot about drugs and what’s best for his niece, but all he does in this video is judge children faced with peer pressure without ever actually stepping in to help. At no point do we learn what drugs are—but we sure wish we had some.Most Disturbing Moment:

Wise Owl’s sounds of disapproval as the youths talk about drinking liquor.

Accidentally touching a work colleague’s hand when you both reach for the bathroom door.

Finger puppets are not, as a rule, nice to look at. Finger puppets with human mouths border on dismaying. Finger puppets with human mouths trying to be funny as they talk about Jesus are absolutely unacceptable for any person to watch. Ever. Harvey, my kid, saved himself the pain by declaring, “I don’t like this one,” about two seconds in. Julian made it almost all the way through before turning to his mom and asking, “When will this be over?”Most Disturbing Moment:

Closing your computer, walking away, and swearing to change your life.