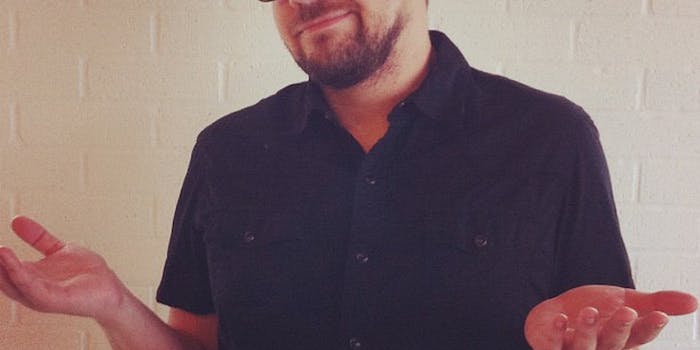 Lessons on the right way to Reddit from the Daily Dot's own Logan Youree.

When most of us imagine a spammer, we picture a swindling, unsavory person—maybe even an evil bot!—out to deceive us.

You probably don’t picture someone like Logan Youree, the Daily Dot’s mild-mannered community manager. He was banned from Reddit as a spammer Tuesday—a cautionary tale for anyone trying to find the right way to participate in Web communities.

The Reddit community prides itself on its spam policies. The community’s largely self-enforced ethos of eliciting meaningful contributions from its users is  one of the things that makes Reddit different from other link-voting sites. But it can also make the site a difficult experience for newcomers—and even semi-serious redditors like Youree.

Nobody will tell you when you get banned from Reddit as a spammer. Youree is still able to log in and post upvotes, comments, and links—only now, they’re blocked from public view. He didn’t realize he’d been blocked for spamming until Kevin Morris, our Reddit beat reporter and resident expert on the community, emailed him to ask if he’d deleted his account. (On Reddit, that’s called a shadow ban.)

Youree’s not upset, but his story has taught us all a lesson. Anybody can be labeled a Reddit spammer if he or she isn’t careful. Here’s three tips Youree taught us based on his experience.

Youree’s job is to make sure Daily Dot content gets shared with the communities we cover inside those very same communities. So it makes sense that a lot of his Reddit activity consists of posting links to dailydot.com. And he spends most of his time reading Daily Dot content and interacting with Daily Dot readers, so he doesn’t exactly have a lot of spare time to surf around for links unrelated to topics we cover.

Even so, Youree’s user account isn’t simply a company one. A redditor since before he joined the Daily Dot, he also contributes to subreddits that interest him, like r/austin, r/gaming, and r/pics. Nobody would mistake him for a spambot.

“I tried to interact in discussions and upvote lots of stuff not having to do with us, stuff that I actually liked myself and make comments, but the problem was that I don’t really have much time to read a lot of other articles from other sources so it isn’t easy for me to submit links that are from other places,” Youree said. He estimated 80 percent of the links he submitted were from the Daily Dot—clearly too much, even though he limited his submissions to three a week.

To moderators, Youree’s comment contributions didn’t outweigh the fact that he was posting links primarily from just one source—and one he worked for.

“It’s not strictly forbidden to submit a link to a site that you own or otherwise benefit from in some way, but you should sort of consider yourself on thin ice.”

Youree crashed right on through.

By doing a search for Logan’s Reddit username, the Daily Dot was able to find out which moderator reported him as a spammer. We asked DrJulianBashir how he typically identifies spammers.

“It’s hard to nail down every last thing, but a lot of submitting of the same domains (especially if they’re not established well known names) or YouTube channels [are red flags],” he told us.

DrJulianBashir suggested that next time, Youree pay to advertise links on Reddit, or submit his own links to subreddits like r/shamelessplug where they’ll be better appreciated.

“Submitting your own stuff to Reddit is fine, and great if it’s good content,” he said. “It’s just good to keep it to 10 percent or less of what you post to promote diversity and vibrancy in the community. If a majority of what you submit is your own stuff, how much are you really contributing to Reddit?”

3) Talk to the moderators.

Morris, the Daily Dot’s Reddit reporter, has never been banned—but he has had a post deleted. In that case, he contacted the moderator and had the deletion reversed, successfully arguing that he wasn’t a spammer.

Because Morris has a longstanding reputation as a redditor that’s visible in his profile history, such pleas carry more weight than they might from a less consistent contributor.

Morris also contacts moderators before submitting links to get their okay—and follows their advice if they don’t give him a thumbs-up on posting.

What happens if you don’t seek moderators’ advice ahead of time? Benjamin Grelle, known famously as The Frogman on Tumblr, found himself labeled a Reddit spammer in the r/funny subreddit for posting his own content.

“I was having trouble with people posting my content without any credit to me,” he told the Daily Dot. “I was losing a great deal of potential traffic to my site and several people were even claiming they created my content. I decided to submit my best posts on my own, no more than once or twice a week, and I got banned without warning.”

He spoke to moderators afterwards, but it was too late. He’d been banned from r/funny—a subreddit-specific ban, different from the sitewide shadow ban Youree received.

“They told me I was spamming because only 10 percent of my submissions may be from my own website,” said Grelle.

Judging redditors just by their link contributions may be a misinformed practice. The Daily Dot’s research shows that very different groups of people contribute links and add comments to Reddit. But redditors have to accede to moderators’ judgments. If they don’t like a mod’s decisions, their only option is to start their own subreddits.

Youree doesn’t question DrJulianBashir’s decision in flagging him. However, he does think he should have been warned.

“I think I’m more bothered that they didn’t even tell me more than they actually did it. I was kind of expecting something like this to happen but thought that I might get a warning or notice or something if I was crossing the line too much,” he said.

Grelle went to Reddit’s general manager, Erik Martin, for advice, but was told there was nothing he could do.

“He told me that subreddits are at the mercy of the moderators,” said Grelle. “They can ban you for spelling errors if they wish. Sometimes it becomes less about spam and more about power trips.”

Grelle said that it took several months before his ban was lifted, and even after that he had to promise he wouldn’t post any links to his own site any more.

“I broke the rules and got banned for it,” he said. “I won’t be doing that again.”

Update: We clarified the type of bans Youree and Grelle received. We’ve also corrected this article to note that Morris has only had one post, not multiple posts, removed.