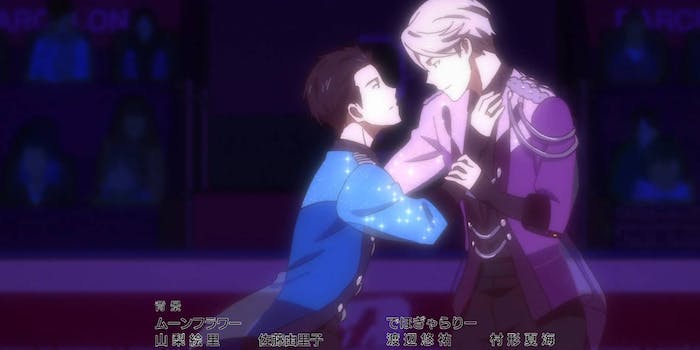 ‘Yuri on Ice’ ended its first season on a perfect note

The perfect combination of tense, romantic, and tantalizingly inconclusive.

The last two episodes of Yuri on Ice almost felt like a real figure skating event, focusing on the two halves of the Grand Prix Final. Six skaters remained, including the two Yuris: Yuri Katsuki, our lovable and neurotic protagonist; and 15-year-old Yuri “Yurio” Plisetsky, the perpetually enraged Russian wunderkind.

As expected, the finale provided a satisfying conclusion to one of the most tightly structured shows we’ve seen all year. The surprise was how much it left open for a second season, hinting at future rivalry between the three lead characters.

Originally, it seemed almost inconceivable that Victor would return to skating. He’s won so many gold medals they probably have their own room in his apartment, and at (almost) 28, he’s older than most of his competitors. Even after Yurio beat one of his records in episode 11, Victor seemed proud rather than jealous of Yurio’s achievement.

As it turned out, the thing that persuaded Victor to return was the same thing that persuaded him to leave in the first place: Yuri Katsuki. After discovering Yuri’s plan to retire after the Grand Prix Final, Victor decided to provoke Yuri’s competitive spirit by returning to skating himself—while also staying on as Yuri’s coach, as promised. 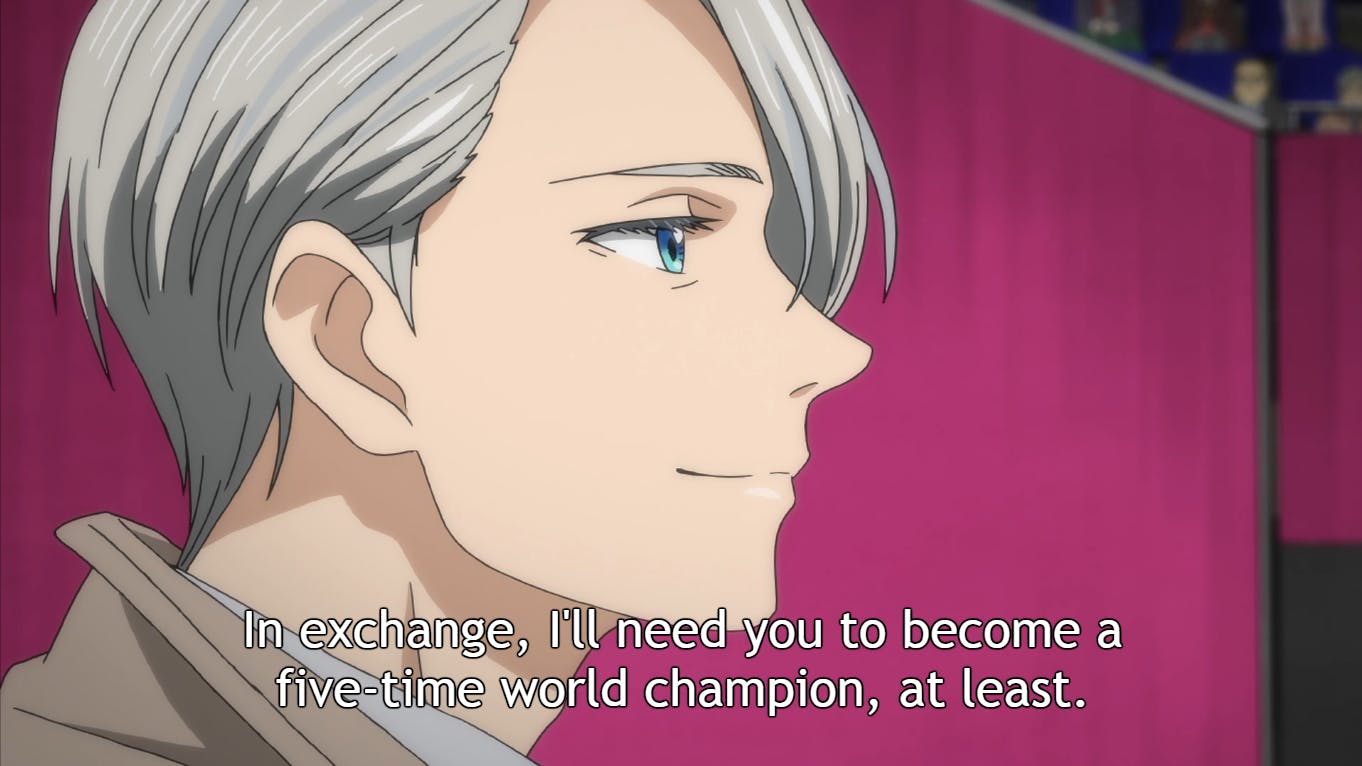 This felt like the ultimate example of how Victor and Yuri feed off each other’s energy, both on and off the ice. Instead of being driven by his own desire to win, Victor’s new goal is to take the world by the throat and yell, “Pay attention to Yuri Katsuki’s awesomeness!” And if that means returning to the competitive circuit when he may be too old to win another gold medal, then so be it.

Victor and Yuri share the endearing yet frustrating trait of simultaneously being obsessed with each other, and also being very self-absorbed. In Victor’s case, this manifests itself in his constant air of melodrama, making everything All About Him. In the finale that meant derailing Yuri’s retirement by launching himself back into the spotlight, and then revealing this decision five minutes before Yurio went onto the ice, overshadowing his big moment as well. (At least Yurio is used to it.) 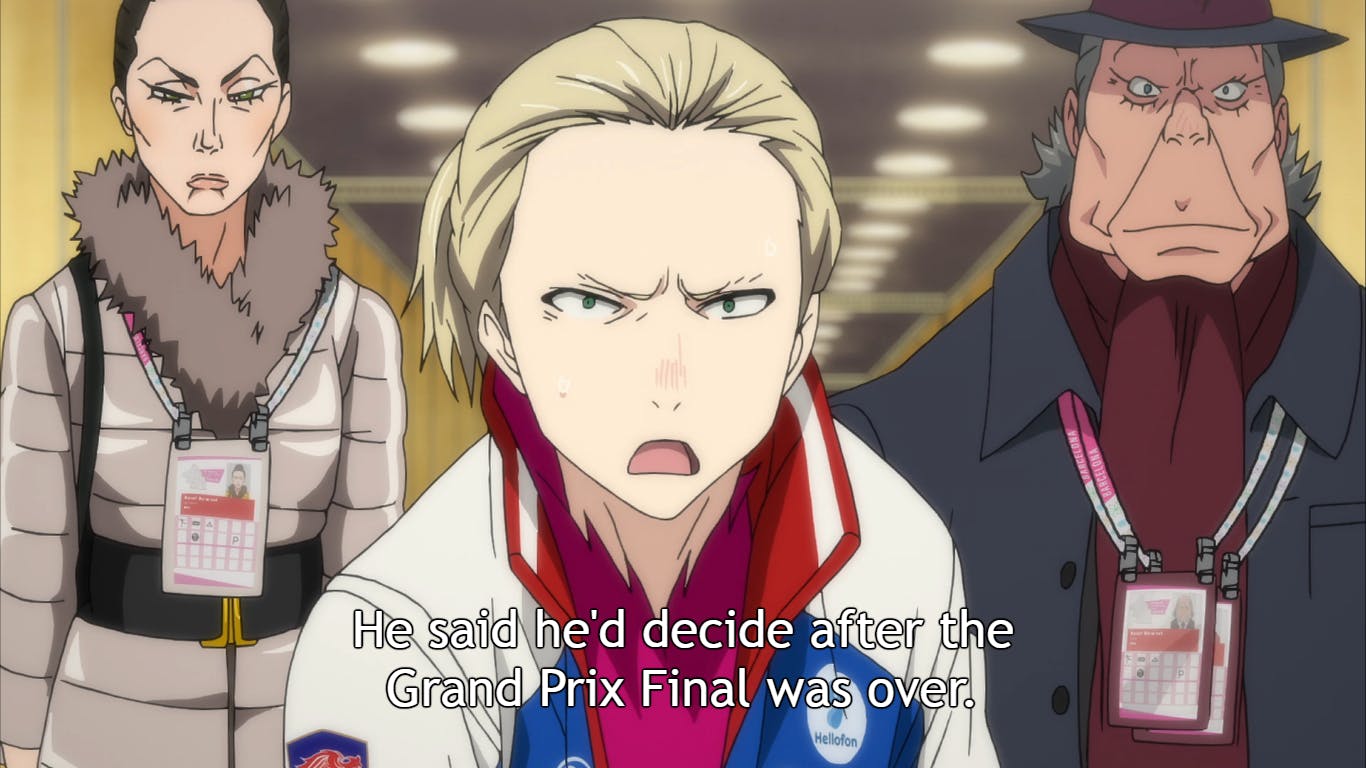 In Yuri’s case, that self-absorption is linked to his anxious nature. The finale proved that Yuri now has the confidence to do his best at the Grand Prix Final and even beat one of Victor’s records, but he’s still oblivious when it comes to their relationship. He seems genuinely surprised when Victor reacts by crying when Yuri says he wants to retire, even though this would effectively mean the end of their relationship. (Remember, Yuri spent months silently assuming their partnership would end after the Grand Prix, whereas Victor moved to Japan on the tacit assumption they’d be together indefinitely. They even exchanged rings, Yuri!)

From a romance perspective, it was very tense to watch this conflict unfold in the finale. But somehow, Yuri on Ice always manages to fit at least an hour’s worth of drama into each 23-minute episode. While the season didn’t end with Victor and Yuri together in the way we might have hoped (i.e. with a gold medal round Yuri’s neck), we got two very satisfying conclusions to their romantic arc: the birth of a professional rivalry, and the duet we’d all been waiting for.

The end of episode 12 gave us exactly what Yuri needed at the beginning of the season. Professionally, he’s now on equal footing with Victor as a rival. Meanwhile on a personal level, his Grand Prix exhibition performance symbolized the journey of the show’s central romance. Skating together for the first time in public, Victor and Yuri performed a duet of “Stay Close To Me,” the song that brought them together in episode 1.

“Stay Close To Me” has always acted as a love letter between the two leads, gaining new meaning as the story progresses. Originally performed by Victor, it was a lonely aria about a man reaching out for love. Yuri’s imitation of his choreography was the message that provoked Victor to quit skating and become Yuri’s coach, and their duet is symbolic of how they came together as a couple. Since they’ve always been better at communicating through skating than with words, it’s a fitting choice for their grand finale.

Always the overachiever, Yurio got the gold medal he deserved—and much like Yuri, his success was spurred on by emotional growth. Episode 11 saw him finally come to terms with the “agape” theme of his short program, expressing the love he felt for his grandfather, his new friend Otabek, and his fellow skaters. Then in the finale, he’s energized by his desire to beat Yuri as a worthy opponent. Basically, Yurio now sees Yuri as his nemesis—albeit in the style of Kate Beaton’s nemesis comics. He wants to defeat him, but he’s also furious about the concept of Yuri retiring from competition. 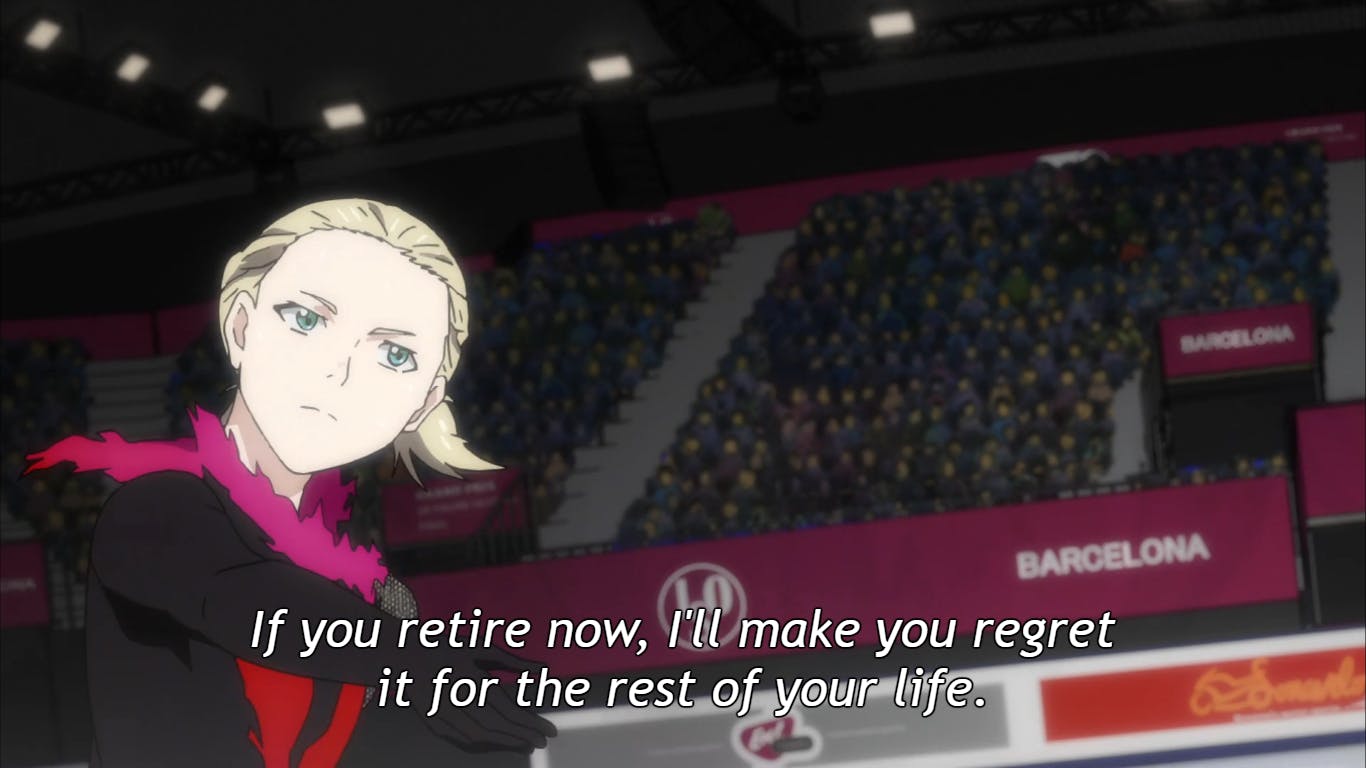 The other skaters really came into their own during the latter half of the season, in yet another example of the show’s obsessive attention to detail. Chris Giacometti went from being a walking dick joke to a sympathetic character, thanks to the influence of Yuri’s unreliable narrative and the late revelation that Victor’s retirement had a real effect on Chris’s performance. (We also discovered that Chris had a mystery guy in the background all along, which puts a new spin on his flirtatious behavior.)

The biggest surprise was JJ, who was always the polar opposite of Yuri. While Yuri thinks of himself as an unknown loser, he’s actually a world-class athlete and beloved by skaters including his childhood idol, Victor. Whereas JJ, who exudes confidence and has his own theme song, is largely ignored by other skaters. He ends up having a personal crisis and tanking his short program, in a reversal of Yuri’s role at the start of the season. This somehow redeemed JJ in the eyes of the audience, proving once again that Yuri on Ice can create compelling sports drama without needing a true antagonist.

Part of the reason Yuri on Ice caught on was its incredibly active fandom. That community exists because the show strikes a perfect balance between giving the audience what it wants, and what it needs. And for the finale, that meant giving Yuri a personal victory without achieving the ultimate goal that would mark the end of his story. By hinting at a happy future with just enough conflict to fuel speculation, Yuri on Ice‘s audience has more than enough material to discuss during the wait for season 2.