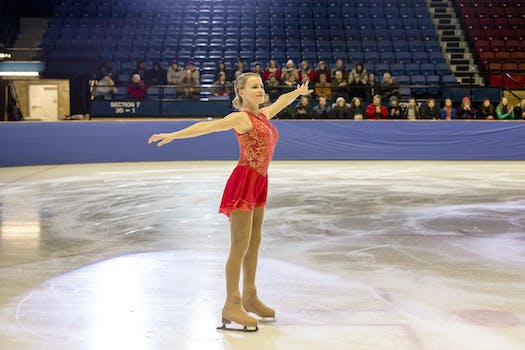 Photo via Love on Ice/Hallmark Channel

'Yuri on Ice' fans are demanding an explanation for why this Hallmark movie looks like their favorite anime.

To many fans of the anime Yuri on Ice, the upcoming Hallmark Channel movie Love on Ice sounds suspiciously… familiar.

As you may be able to deduce from the title, Love on Ice is a romance about figure skaters. Here’s the plot summary from the Hallmark Channel website:

“Former figure skating champion, Emily James, now 27 years old and considered a relic in the world of figure skating, gets an improbably shot to reclaim skating glory when a young coach sees greatness in her. Together, they find their love of skating goes far beyond the ice.”

By comparison, Yuri on Ice is about a 23-year-old figure skater who is considering retirement after a disastrous competition loss. His career turns around after he partners with a new coach, Victor Nikiforov, and the two men fall in love over the course of the show’s first season. There are some key differences (Love on Ice‘s coach is not a figure skating star in his own right, for example), but the superficial similarities are obvious.

Plenty of Yuri on Ice fans saw the Love on Ice trailer and immediately suspected it was a ripoff.

If you search for the movie on Twitter, you’ll see dozens of irate responses from anime fans. In less than a day, 3,400 people have signed a Change.org petition demanding an explanation for the similarities between Yuri and Love on Ice. The trailer’s YouTube comments tell a similar story, and the film’s IMDb page has been hijacked to feature the plot summary of Yuri on Ice. This is what its IMDb message boards look like as of Tuesday.

You can understand why Yuri on Ice fans might be annoyed by the idea of an unacknowledged remake, especially if it appears to “straightwash” a love story between two men. However, the similarities are probably coincidental. All we’ve seen from Love on Ice is a 30-second trailer and a short plot summary of a fairly generic love story, and even if it does overlap with the basic premise of Yuri on Ice, the Hallmark Channel simply didn’t have time to plagiarize such a recent TV series.

Yuri on Ice premiered in Japan on Oct. 5, gaining popularity in the U.S. throughout November and December. Meanwhile, Love on Ice was already filming in early November. In order for it to be a ripoff, the entire pre-production process would have to take place within a month of Yuri on Ice‘s first episode: the screenwriter would have to write a screenplay and get it greenlit by the Hallmark Channel, which would then have to cast the movie and find suitable filming locations. Even by the rapid production standards of TV movies, that’s an implausibly fast turnaround. (The Daily Dot has reached out to the Hallmark Channel for confirmation of the film’s production schedule, and we’ll up this story if we get a reply.)

Although Yuri and Love on Ice have similar titles, the “on ice” appellation is hardly unusual. There are even several books named Love on Ice already, including gay hockey player erotica, and two romance novels about skaters who face career setbacks and then find love. And in a similar vein to mass-market romance novels, the Hallmark Channel produces several original movies each season, often using specific settings like restauranteur romances (A Taste of Love; Appetite for Love) or wedding planner love stories (For Better or For Worse; Perfect Match).

Without solid evidence to suggest Love on Ice is a ripoff, we’re inclined to believe the similarities are pure coincidence, and Hallmark was already planning to include a figure skating romance among its schedule of winter TV movies.