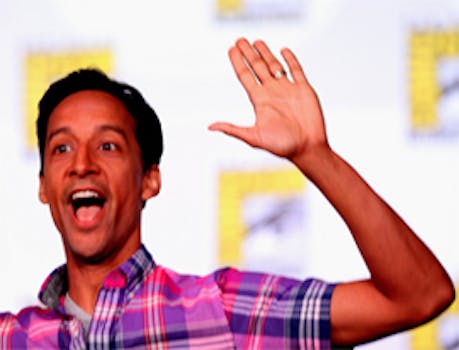 Community, Elementary, Revenge, and Pitch Perfect all have sleeper fandoms that ignite during Yuletide.

When is a small fandom not a small fandom? At Yuletide, when dormant fans wake up long enough to give their favorite rare fandoms an extra helping of holiday cheer.

Yuletide, the largest rare fandom fanfic challenge, is in full swing, and signups for this year’s 10th running have just closed.

But even in a challenge that’s purportedly all about “rare” fandoms, there are always some fandoms that are more popular than others. Yuletide judges popularity based on numerous criteria, but some fandoms seem to be popular only during the holidays, while the challenge is running.

So which fandoms are this year’s most popular? The answers might surprise you.

This beloved cult favorite may not be able to find its fan following on NBC, which just pushed its season 4 premiere back to February, but it has no trouble finding love within fandom. It’s been the most-requested fandom in Yuletide two years running, with nearly 100 requests over both years.

Returning for the second year, Revenge is a great example of a fandom that is wildly popular offline, but gets generally overlooked by fanfiction writers until Yuletide rolls around.

This recent film about an all-female a cappella choir may be tapping into the Glee fandom, which also has a strong femslash presence. Both are the perfect ingredients for a surprise dark-horse Yuletide favorite.

Despite the controversy surrounding CBS’s latest reboot of Sherlock Holmes, it’s easy to see that the words “Lucy Liu as Watson” are enough to launch all kinds of fic ideas in the minds of Yuletide participants.

A sleeper hit that’s grown a loyal fan following as it sailed its way to a third season, this SyFy series is a gift to Stephen King fans. And, apparently, to Yuletide.

Another SyFy show, Warehouse 13 is the most popular original show in the network’s history. A fourth season in the works and recurring Yuletide popularity attest to that. Sci-fi, ensemble casts, and lots of interesting female characters? All ingredients for popular Yuletide fandoms.

Along with Lois McMaster Bujold’s Vorkosigan Saga, which was finally retired this year as having grown too large to qualify for the challenge, Terry Prachett’s zany, immense sci-fi series is one of only two literary fandoms to routinely feature in Yuletide’s list of most popular fandoms.

A perennial favorite, the English old money proves, along with Revenge, that melodrama and ensemble casts make for great recurring Yuletide fandoms.

This popular sci-fi series is newly eligible for the challenge this year under the category of once-popular fandoms whose canons have been over for at least a decade. Apparently, it’s still got it.

Americans know this serial British mini-series as Inspector Lewis, a banter-filled detective show that airs as part of PBS’s Mystery! series. Since it began in 2006, the series has slowly built up a loyal fandom following, to the point that even though the series has only just now broken into the “popular fandoms” rankings of Yuletide, some fans argued it was too popular to be let in.

In her interview with the Dot, Yuletide moderator elynross predicted that Elementary, Haven, and Revenge would all see large numbers of requests and offers. Though some of these fandoms become known as “Yuletide fandoms,” those which see lots of activity during the challenge but lie dormant the rest of the year, often Yuletide can boost a small fandom to greater popularity.

Perhaps this year will be the year one of these fandoms breaks out of the Yuletide mode and becomes the next fandom you’ll want fic for all year long.