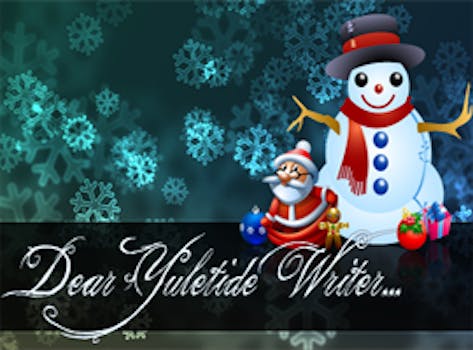 Instead of  traditional presents, thousands of Yuletide participants give original fanfiction to delight fans of obscure movies, books, historical figures and more.

Is it Yuletide yet?

Not until Christmas, but nominations are open now for the 10th running of Yuletide, an annual event so popular within fandom that it’s practically become a fandom of its own. (Scratch that: Yuletide does have its own fandom.)

Yuletide is a twist on the classic Secret Santa gift exchange: Instead of traditional presents, participants anonymously give each other original works of fanfiction. The writers’ identities are revealed only after their fics are posted on Christmas Day.

Yuletide may well be the Internet’s largest pan-fandom fic exchange—only you’ve likely never heard of most of the fandoms involved. Yuletide focuses on rare fandoms, which means that Harry Potter is out (although it gets nominated every year as an ongoing joke).

For a challenge whose goal is to pluck obscure fandoms out of the ether and give them some attention, Yuletide is extremely popular. It’s run every year since 2003, when it had 300 participants. Last year it grew to over 1,200, with over 3,000 fics written about everything from Neil Gaiman novels to Leonard Cohen songs.

Yuletide has created an awareness of “popular” small fandoms, as year after year has seen Fairy Tale fandoms, retellings of various fairy and folk tales, surge to the top of the most-offered and most-requested lists. It’s also played with interesting ideas of what exactly constitutes a “fandom.” With each passing year, fans push the boundaries further, nominating everything from commercials to paintings to Twitter accounts to viral YouTube videos to Google themes as fandoms. Although nominations don’t close until October 3, this year’s nominations spreadsheet already has nearly 1,000 fandoms listed, including the following intriguing fandoms:

Of course, not all of these fandoms will be nominated in the end, and even fewer will have fics written about them. Yuletide functions in three basic stages: the nominations period, when fans nominate a fandom they think they’d like to sign up for—because when anything can qualify as a fandom, some winnowing is always good; the signup process, when fans select the fandoms they want to write and receive fics in; and the final stage, when fics are written, submitted, and posted on Christmas day.

It takes a lot of people to steer a project of this size, but Yuletide has only ever had two concurrent organizers: Astolat, the well-known slash fan who created the challenge, has stayed involved for all ten years, with Tzikeh joining her, then ceding the organizational side of things to elynross in 2007. Under their auspices, Yuletide has become a system of its own, with fans working together to turn the entire process into a well-organized machine. Fans use the Yuletide LiveJournal community to brainstorm fandoms and work out who will nominate what in advance, in order to avoid wasting a nomination slot with something another fan has already nominated. There’s also an annual spreadsheet, updated by fans during nominations to give people a quick look at what’s already been nommed.

After signups, when a sorting algorithm pairs up writers and fics, fans create “Dear Santa” letters to help writers who may be unfamiliar with their assigned fandoms. These usually include helpful links and further info about the kind of fic they, as fans, might want to see. Oh, and there’s a spreadsheet for those, too.

During the zany 24 hours or so between the final submission deadline and the revealing of the presents on Christmas Day, fans can contribute to Yuletide Madness, where they write last-minute “treats” for giftees. Hundreds of no-shows happen yearly, so there’s also a pinch-hit list, with 2,200 potential writers, many of whom try to step in for missing writers rather than participate in the actual challenge. And finally, after all the fics are in, there’s New Year’s Resolutions, in which all of that year’s requests are released into the wild, for people who want to continue filling requests all year round.

Yuletide has experienced some bumps along the way, largely due to the difficulty of hosting such a massive repository of fiction. Nine years of Yuletide submissions are currently split between two sites. The old archive houses most of the fic collection, but navigation is messy and some pages are missing, while the new archive at the Archive of Our Own is testing AO3’s already-strained servers. Due to the popularity of this year’s event, Yuletide mods are offering new participants a chance to bypass the Archive’s current waiting list.

The challenge also hasn’t been without criticism or controversy, as debate over what constitutes a “rare” fandom can get quite heated. The “don’t look a gift horse in the mouth” policy has also created some resentment, leading to the creation of yuletide_coal, a LiveJournal community where disgruntled recipients can complain about gift-givers who seemed to ignore the spirit of the challenge. And there are recurring concerns that Yuletide uses too many of the Archive of Our Own’s resources, despite being, unofficially at least, unaffiliated with the AO3 or its parent organization, the Organization for Transformative Works.

But by and large, Yuletide has been a rousing success. The frenzy over wondering when fics will be revealed led to the cheeky website Is it Yuletide Yet? There’s a branch-off challenge for fanart, Yuletart, that’s run off and on since 2007. There’s even an IRC chat.

And above all, there’s fic. Fans know that if it doesn’t get written this year, they can always nominate their obscure fandom again for next year’s Yuletide. This is one challenge that could easily run for another decade.

Disclosure: The author of this article is  a longtime Yuletide participant and a staff member of the Organization for Transformative Works, which operates the Archive of Our Own where Yuletide is currently housed.