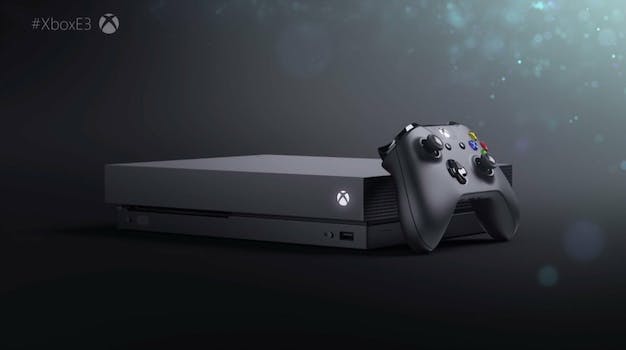 The Xbox One X promises to be the most powerful console yet.

After much speculation about the future of its consoles, Microsoft announced its mysterious Project Scorpio as part of the Xbox presentation at E3 2016. Fans weren’t given a glimpse at the machine itself, but details of the hardware were hinted at, promising a powerful new toy for Xbox fans.

One year later at E3 2017, Microsoft unveiled Project Scorpio as the Xbox One X. You can check out all the details below.

Thanks to an exclusive report from Digital Foundry, we got the final specs for Xbox One X earlier this year. There aren’t too many surprises based on what the Xbox team has mentioned in the past, but it seems that the console will, in fact, hit the high bar of expectations set up and teased since the last E3. Sony’s PS4 Pro release clearly put pressure on the Xbox team, for while Xbox One X will be presenting games in 4K resolution, the conceit setting this new console apart is “smart design.”

Xbox One X’s engine was custom built with help from AMD and hits the six-teraflop figure Microsoft set last year. The console’s GPU has been built specifically for this top-tier hardware, coming in at 12GB of fast memory and an eight-core CPU. This substantial increase in power requires a great deal of processing, but both the internal power supply and cooling system were designed to maximize the system’s processing efficiency. Xbox One X will be the first home console to use a vapor-cooling chamber, similar to high-end graphics cards on high-end gaming PCs. The console’s increased performance will be able to hit 4K resolution across several forms of media and run games at 60 frames per second without much trouble.

Fans are desperate to learn more about Microsoft’s mystery machine, especially when they can get their hands one. Because the Xbox One S was launched late last year, it poses a problem to consumers who might want to hold off on the latest Xbox iteration and opt for the over-performingXbox One X instead.

We now know that Xbox One X will hit store shelves on Nov. 7.

Amazon has created a pre-order page, but fans can only sign up for alerts at the moment.

With all that additional power, players have expected that Microsoft’s newest console won’t be cheap.  The upgraded Xbox One S launched in a 2TB model for $399 last summer, but bundles pricing the 500GB version at $249 were popular during the holiday season.

Prior to its reveal as Xbox One S, Scorpio had been sold as the next step toward “a future without console generations” rather than a proper, new Xbox model. The console was already branded as part of the Xbox family, meant specifically for players who don’t own a high-end gaming PC but still value graphical fidelity. Its 4K compatibility was mentioned often during Microsoft’s E3 presentation.

Microsoft has previously confirmed that no exclusive games will be developed for the system. This again backs up the assumption that the console is less a leap to a next generation and more an upscale in power and fidelity. Forza Horizon 3, ReCore, and Gears of War 4 already benefit from the Xbox One S’s upgraded hardware compared to an original Xbox One and will likely look even better running on Xbox One X. The upcoming Halo Wars 2 also uses this HDR upgrade on Xbox One S systems to display better on 4K-capable televisions.

In the video unveiling Scorpio’s development, members of Bethesda and DICE discussed the console’s technology, hinting that games like Fallout 4 and Battlefield 1 might benefit from the system’s powerful components.

Xbox One X will remain compatible with all Xbox One games, as well as the plethora of Xbox 360 games that have been added via backwards compatibility. The disc drive on Xbox One X is seemingly identical to that of the Xbox One S, including UHD Blu-Ray support. Like the PS4 Pro, Xbox One X includes a “boost mode” for older games that aims to lock performance at higher frame rates and upscale graphics to 4K resolution.

Likewise, the capture features from the Xbox One user interface have been greatly improved on Xbox One X, adding in HDR support for users with high-end displays. You will be able to save footage and screen grabs from games running at 4K, and scroll through frame by frame to pick out your favorite shots. Xbox One X is also expected to ship with a 1TB hard drive, on par with most Xbox One S models and the PS4 Pro.

At Microsoft’s E3 2017 presentation, Project Scorpio was officially unveiled as the Xbox One X. Design-wise, the new console appears almost identical to the recent Xbox One S model, with a samller top and squared bottom. In addition to 4K games, UHD Blu Ray, and streaming support, Xbox One X supports Dolby Atmos audio output. All accessories compatible with any previous Xbox One models will work on the X, as well as the same software library. A technology known as supersampling makes all games played on Xbox One X look better, even on a TV that doesn’t support 4K.

The previously known specs regarding the processor and teraflops were confirmed on stage, as well as a Nov. 7 launch date. Forza 7 was shown off, highlighting dynamic weather effects and fully realized environments like Dubai.