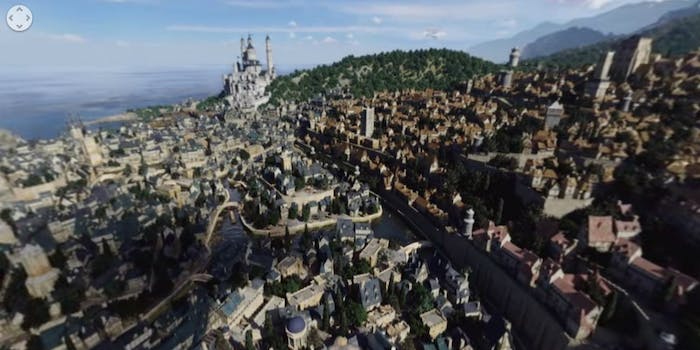 Industrial Light and Magic xLAB’s new trailer for the upcoming World of Warcraft movie may have just put every other movie trailer released in 2015 to shame.

That’s not entirely fair, considering most movie trailers are composed of footage that may appear in the film. The Warcraft: Skies of Azeroth 360-degree movie trailer puts you on the back of a gryphon for a fly-by of Stormwind City, capital of the Alliance faction in WoW. It’s not a scene that you’ll see in the film as much as it is a tour of the film world.

Warcraft: Skies of Azeroth is tantamount to a video game playing within a YouTube window, but the entirely free camera movement does give you an idea what some VR experiences feel like. It is recommended that you only try Warcraft: Skies of Azeroth within Chrome. Also, if you try to run the trailer at max resolution and/or in full screen, performance might be choppy.

ILMxLAB, the studio behind Warcraft: Skies of Azeroth pulls together the talents of Lucasfilm, ILM, and Skywalker Sound to create “immersive entertainment,” read: virtual reality experiences.

The introductory video for xLAB shows employees working with SteamVR, the only virtual reality system that allows free movement within a VR environment. It also shows xLAB working within the Star Wars universe. Try to keep your head from exploding as you consider the possibilities.

The World of Warcraft movie will be released in June 2016.