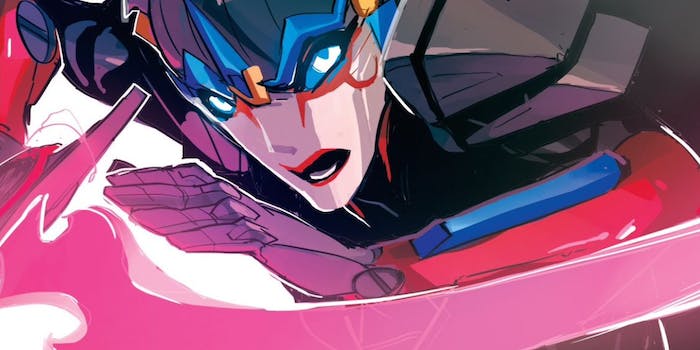 Transformers comic ‘Windblade’ to get another miniseries in 2015

Love for this fan-built bot has rocketed her to a second comics run.

Anyone who doubted a fan-built, female-focused Transformer could successfully headline her own comic book has officially been proven wrong. This weekend at BotCon it was announced that Windblade, the newest female robot in IDW Publishing comics canon, would be returning in a new miniseries in 2015 after completing her current four-issue run.

The news was revealed during the IDW panel at the convention where the women behind the comic, writer Mairghread Scott and artist Sarah Stone, were in attendance. The team will return for next year’s series but couldn’t explain much about what it will be about without spoiling the current miniseries’ story.

Issue 3 of Windblade will be released Wednesday and Scott said it will be the darkest issue yet.

“The fan response has been tremendous and we couldn’t let her go, and apparently you guys couldn’t either, so we’re going to keep going,” Scott said.

That response was clear at BotCon, where John Barber, senior editor at IDW Publishing, told the audience all copies of Windblade had sold out at the IDW booth. Barber also said that the comic had attracted a lot of new readers and it was clear people have taken to the character Scott and Stone created.

While we’ll have to wait for details on the story and release date, it’s nice to know we won’t have to say goodbye to Windblade after Issue 4. You can watch the Transformers IDW panel below.