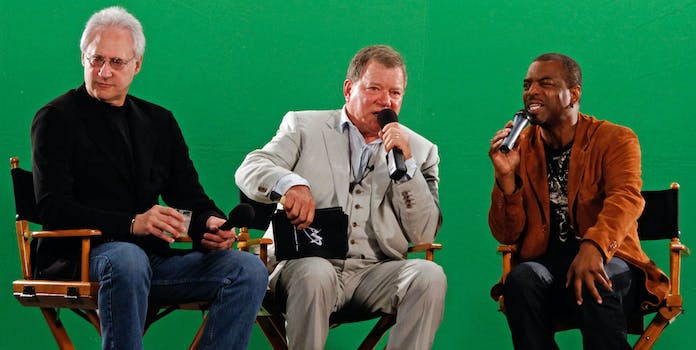 They wanted a narrator who would be "comfortable in outer space." Who better than Captain Kirk?

Classic stop-motion series The Clangers is coming back to TV this year, and the new episodes will be narrated by none other than William Shatner.

The Clangers is a much-beloved children’s show about a group of pink, mouse-like creatures who live on the moon and communicate in whistles. The original series was broadcast by the BBC from 1969-1972, created by Oliver Postgate in his signature stop-motion animation style. Much like his other children’s shows like Bagpuss and Ivor the Engine, The Clangers remains popular to this day. If you haven’t seen it before, here’s the first five-minute episode.

It’s a strange, adorable, and extremely British little show, and William Shatner seems like an ideal choice to provide narration. The new episodes will air on U.S. pre-school network Sprout, and as its president put it, the series requires a narrator who “kind of felt comfortable in outer space.”

Former Monty Python actor Michael Palin will be narrating the new Clangers for the BBC, and Shatner will re-record the narration for U.S. TV. Which just means you’ll have to watch both versions, doesn’t it?

Photo via rwoan/Wikimedia, CC BY 2.0