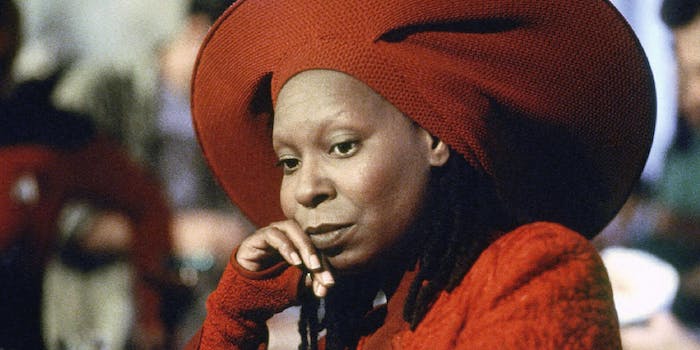 Star Trek: The Next Generation/CBS

Star Trek: Picard only includes a handful of characters from The Next Generation, but that’s just season 1. There’s plenty of room for others to return in the already-confirmed season 2, and it looks like Whoopi Goldberg’s character Guinan might be one of them.

Patrick Stewart asked Goldberg to join the show during an interview on The View, describing it as a “formal invitation” from Picard‘s producer Alex Kurtzman. And sure, this is a publicity stunt to promote the show’s debut, but it also feels… pretty real? Picard‘s cast and creators have already talked about bringing back other members of the TNG crew, and Goldberg sounded genuinely excited to reprise her role.

.@SirPatStew officially invites @WhoopiGoldberg to join season two of #StarTrekPicard: “It was wonderful having you, and we cannot wait to have you with us again one more time.” https://t.co/f8u2wbJuik #StarTrek pic.twitter.com/mxOtyJxF63

While it does feel like Whoopi Goldberg spent more time as a TV personality over the past few years, she’s actually been acting steadily in a variety of TV and movie roles. Her current hairstyle is connected to a part she’s playing in an adaptation of Stephen King’s The Stand, which will air on Star Trek: Picard‘s home network CBS All Access. So she’s probably already had conversations behind the scenes about playing Guinan again.

Guinan was one of Picard’s closest friends on the Enterprise, a 600-year-old humanoid alien who made her debut in season 2, acting as the ship’s bartender and a kind of mentor figure to the crew. Goldberg is a longtime Star Trek fan, and actually contacted The Next Generation’s creators herself to see if a role was available. Since Goldberg was already a big star at the time, TNG wound up filming episodes around her schedule, to make sure Guinan could be a recurring member of the crew.