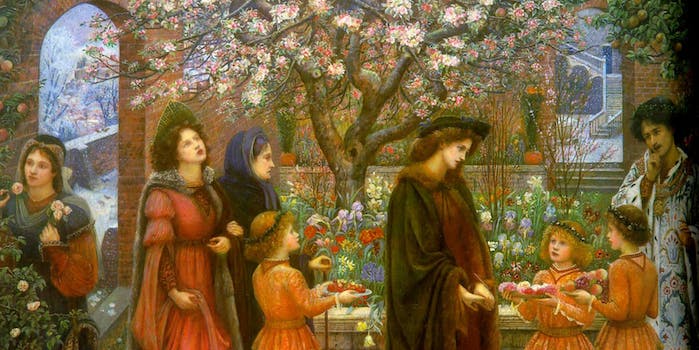 The rules of Mannerpunk every Jane Austen fan should know

Think Pride and Prejudice and Zombies is weird? Think again.

You already know about Steampunk. Thanks to Mad Max: Fury Road you’ve hopefully heard about Dieselpunk. And if you’re really on top of your cultural trends, you may even be into Dreadpunk.

But what about Mannerpunk? Thanks to this week’s Pride and Prejudice and Zombies movie premiere, this literary subgenre is a lot closer to becoming mainstream than you might expect.

Knowing what exactly Mannerpunk is, however, is even trickier than beheading a zombie with a sewing needle. As a genre, it’s long been vilified as an unnecessary and meaningless sub-“punk” genre; but a recent wave of modern Mannerpunk fiction gives us plenty of reason to rethink that estimation. Under a number of different names and overlapping concepts, “Mannerpunk” is on the rise—and if you haven’t seen it infiltrate your corner of pop culture yet, you will soon.

Mannerpunk descends from “fantasy of manners,” a term coined by Swordspoint author Ellen Kushner in 1991. The idea describes a play on comedies of manners like Much Ado About Nothing or The Importance of Being Earnest. The emphasis is on etiquette and society—chiefly, but not always, British.

Basically, if you can stick “Jane Austen meets X” in front of your story proposal, it’s got a good chance of being Mannerpunk. We can only assume this is basically how Pride and Prejudice and Zombies came to exist.

Like other -punks, Mannerpunk runs the risk of getting lumped in with Steampunk. The distinction may not seem substantial, but there are several huge differences. Steampunk incorporates relatively specific elements of the Age of Steam—technological innovation stemming from the late 19th century, Victorian aesthetics and historical settings, and lots of brass, copper, and clockworks—into a fantasy world.

Mannerpunk, however, harkens back to a slightly earlier period of British history—the Regency.  The Regency refers to the late years of the reign of Britain’s “Mad King,” George III, and his son George IV, who became Prince Regent during his father’s period of decline. “Prinny,” as George IV was known, reigned over a brief but glamorous period of English life.

The Regency was more or less the last gasp of pre-industrial British life. Faced with encroaching tensions from the rise of the popular and middle class, the aristocracy operated with very specific rules and regulations. Men and women of leisure used “manners” like high fashion, social graces, and clever wit to maintain their place in society.

Not every story involving “manners” needs to be set in the Regency—the previously mentioned plays by Shakespeare and Oscar Wilde are from different time periods. And some Mannerpunk, notably Gail Carriger’s Parasol Protectorate series, overlaps with Steampunk. But Mannerpunk stories all have a common theme—the use of manners and etiquette as tools and weapons.

This key trope showed up in an early attempt to define what “fantasy of manners” is. In 2004, longtime sci-fi fan Kate Nepveu gave an overview of a panel at Noreascon in which speculative fiction writers including Kushner discussed the genre. They gave us a clear set of parameters.

In other words, no matter what time period or universe she’s in, and regardless of what kind of monster she’s fighting, a Fantasy of Manners heroine has to operate within strictly defined social conventions at all costs.

The idea of a “fantasy of manners” still takes precedent over Mannerpunk as a term; indeed, “Mannerpunk” tends to invoke ridicule and eye-rolling, with many people using it sarcastically or as a parody of “real” punk genres.

But not so fast. Mannerpunk isn’t called “punk” for no reason. Like Dreadpunk, which emphasizes transgression and subversion of pre-existing genres, Mannerpunk asks us to think about who gets left out of these rigid parameters, and what kinds of stories aren’t being told.

But Mannerpunk is often larger in scope. Many modern works that get dubbed “Mannerpunk” do look at larger world and political events. Naomi Novik’s Temeraire series creates an alternate history around the Napoleonic Wars while confronting issues of colonialism and many problems of the real 19th century. Katherine Addison’s The Goblin Emperor concerns the political intrigue that results when a mixed-race outcast long alienated from his royal family unexpectedly takes over the throne and tries to rule.

One recent fantasy trend that often overlaps with Mannerpunk is “Flintlock.” Flintlock fantasy has a more military focus, but also bears most of the trappings of Mannerpunk—a term coined a few years before “Flintlock.” While Mannerpunk as a term often gets mocked, Flintlock, which describes a type of gun, tends to receive high praise and be taken seriously by the speculative fiction community. It’s arguable that Flintlock’s specific emphasis on guns and fighting gets taken more seriously because it presents the genre as being rooted in masculinized tropes rather than feminized ones.

Yet, as a genre primarily propagated and espoused by women writers of fantasy, Mannerpunk clearly has had staying power as a concept despite its tongue-in-cheek origins. As demand for genre fiction that include nuanced portrayals of social issues and representation of minorities has increased, so has interest in the workings of Mannerpunk. Here’s Tumblr user lyrangalia writing about Mary Robinette Kowal’s Glamourist Histories:

Did not expect the Glamourist Histories to end up including a really heart-rending exploration of how childhood abuse leaves lingering scars, or how it becomes a faux-Victorian series populated full of people of colour in Victorian England in actually historically accurate ways (ie not all slaves, including gentlewomen of colour), and with a heroine and hero who face their unthinking classism and racism and are called out on it and learn from their prejudices.

THIS IS SO EXCELLENT.

Through the Looking Glass by Lewis Caroll

The Gormenghast series by Mervyn Peake

Sorcery and Cecilia by Caroline Stevermer

The Stranger at the Wedding by Barbara Hambly

Pride and Prejudice and Zombies

Sorcerer to the Crown by Zen Cho

The Goblin Emperor by Katherine Addison

The Temeraire series by Naomi Novik

The Fly By Night series by Frances Hardinge

The Seraphina series by Rachel Hartman