Why you should plan to see ‘Jupiter Ascending’

Is the new Wachowski space opera going to be amazing, or amazingly bad?

Have you ever wished there was a movie where Sean Bean plays a genetically engineered space mercenary who is part man, part bee? Well, no, probably not. But now’s your chance, because Jupiter Ascending is that movie.

Jupiter Ascending is the latest Wachowski project (the sibling duo that brought you The Matrix trilogy and Cloud Atlas), and if you’re feeling a little confused about it, you’re not alone. It’s being released in the February dead zone when Hollywood’s gaze is trained firmly on Oscar news, making it harder to promote what appears to be a pretty bizarre—if entertaining—sci-fi movie.

Judging by the trailers, Jupiter Ascending looks like it’s either going to be amazing, or a perfect example of “so bad it’s good.” Whatever it is, it won’t be boring. The main storyline is about a janitor named Jupiter Jones (Mila Kunis) who discovers that she’s one of the heirs to an alien royal dynasty, the House of Abrasax. (There’s plenty of entertainingly silly nomenclature in this thing, including one character called Chicanery Night. Sean Bean’s bee character? Stinger Apini. Stinger.)

It feels almost unfair to compare this to Star Wars or Guardians of the Galaxy. A better comparison would be Pacific Rim or even The Matrix, because unlike the vast majority of other sci-fi blockbusters at the moment, Jupiter Ascending is an original story rather than a reboot, adaptation, or sequel. The Wachowskis seem determined to work on projects that are, in a word, weird. Weird by Hollywood’s conservative standards, anyway.

With most of their professional peers being swallowed up by studio-controlled franchises, it’s refreshing to see the Wachowskis making such an unabashedly ridiculous movie. So, while we’re not suggesting that Jupiter Ascending will save Hollywood from its current scourge of reboots and unwanted sequels, it certainly helps.

The bad news is, Jupiter Ascending‘s release date was shunted back from summer 2014 to the beginning of February, allowing more time to polish the special effects. This off-season release date increases the chance that it will sink like a stone, although admittedly it doesn’t have much competition. The other big releases this week are Seventh Son (a similarly delayed fantasy movie that Variety described as a “creative miscarriage”), and obnoxious Johnny Depp vehicle Mortdecai.

If nothing else, Jupiter Ascending is going to be visually stunning. Wachowski films always have a very distinctive visual style, and while the trailer is full of eyebrow-raising moments like Mila Kunis telling her space-werewolf boyfriend, “I love dogs,” it certainly looks fantastic.

The sets are even more sumptuous than the pre-Empire scenes in Star Wars, and longtime Wachowski collaborator Kym Barrett has designed some seriously beautiful costumes. Though, we’re somewhat concerned that Eddie Redmayne’s campy appearance as Balem Abrasax is so undignified that it may damage his Oscar chances. How does the Academy feel about sparkly capes? 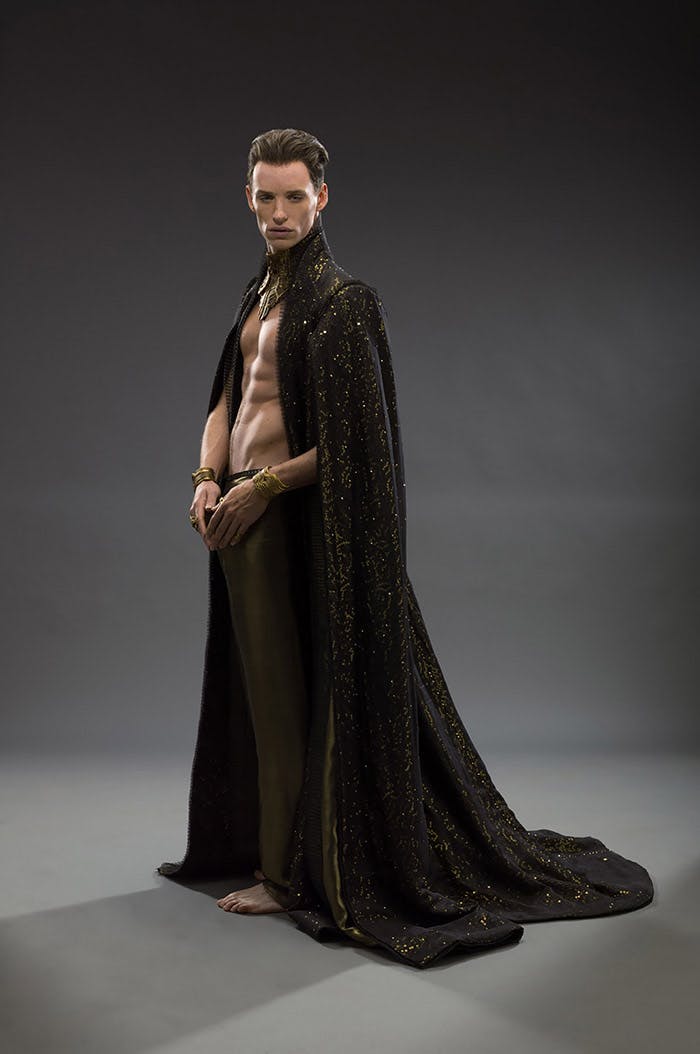 If Jupiter Ascending flops (and, let’s face it, there’s a possibility that it will), we predict that it will wind up being a cult classic in years to come. How could it not?