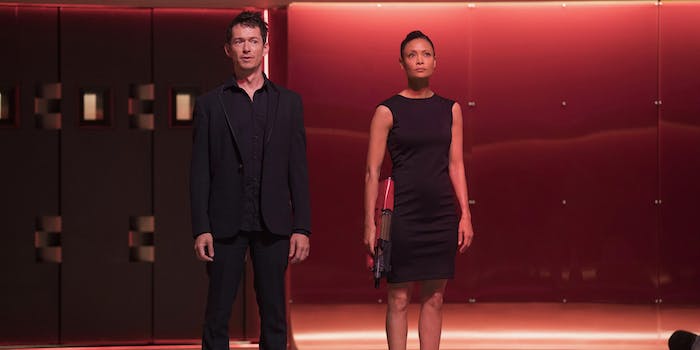 They participated in a panel after the New York premiere at Tribeca.

Warning: This article may contain minor spoilers for the Westworld season 2 premiere.

The end of Westworld’s bloody first season may have had “a feeling of inevitability” as showrunner Lisa Joy put it, but as some of the show’s cast explained during a Tribeca post-premiere panel Thursday night, there are still plenty of surprises in the new season ahead.

While everyone in the room had just seen the upcoming episode, the panel was kept mostly spoiler-free by moderator Christopher Orr and the panelists for those watching along online. But even without major spoiler talk—something that will undoubtedly pop up once the episode airs Sunday night—the cast had plenty to say about their characters’ mindsets and where we’ll find their respective characters at the start of this season.

When we first met Dolores, she was the kind rancher’s daughter. By season’s end, she had awakened, her personality merging with Wyatt (a manipulative leader who’s handy with a gun and has long haunted Teddy), and she led a murderous rampage that tore Westworld apart. But in season 2, Dolores found a third version of her that she juggles: her own self.

The balancing act initially led to some confusion from Wood as to who Wyatt was and how Dolores’ programming and her sense of self factored in, but it led to her and the creators to build the character from the ground up and figure out just how the dynamics would work.

For Newton, Maeve’s path forward to find her daughter came after Newton herself wanted Maeve to leave the park, even though it would have put her in a world full of humans. But there’s no easy choice: leaving would be dangerous for her, but it would also be dangerous for her to stay.

“I was in complete denial about the fact that Maeve goes back into the park, to be honest,” Newton explained. “I wanted her to get out of there so desperately, and I was wedded to that belief.”

Teddy’s journey this season is much more internal as he follows the woman he loves into battle and witnesses the carnage and ruthlessness of Dolores firsthand.

“[Dolores has] changed, and it’s hot for a second, but then you have to stay alive,” Marsden said.

And Wright, whose character is disoriented early in the season as he tries to piece together what happened in the wake of Dolores’ massacre, compared it to “having woken up in a mud pile in the middle of Woodstock having eaten the wrong acid.”

“This isn’t a dream,” Wright noted. “It’s a fucking nightmare.”

Even as Westworld takes place in the not-too-far-distant future, it still has a certain resonance today. Newton noted about how the kind of betrayal that Maeve experienced from her human creators—and the idea that her entire existence was a lie—was something that anyone could relate to. Nolan, on the other hand, made a particularly apt comparison of Westworld investor Delos to Google and Facebook, the latter facing massive backlash for allowing companies like Cambridge Analytica to collect data from tens of millions of users.

After a season of fans being steps ahead of the show as they guessed twists before they aired, the Westworld showrunners and cast believe that now that the doors have burst open, the possibilities of what will (and what could) happen and what the audience can imagine are endless.

“I think it’ll be a little harder for audiences to know where we’re going,” Joy noted.

You can watch Tribeca’s Westworld panel in its entirety below.

Watch a LIVE conversation with James Marden, Thandie Newton, Evan Rachel Wood, Jeffrey Wright, Jonathan Nolan, and Lisa Joy at #Tribeca2018. Westworld is back and more mind-bending than ever.