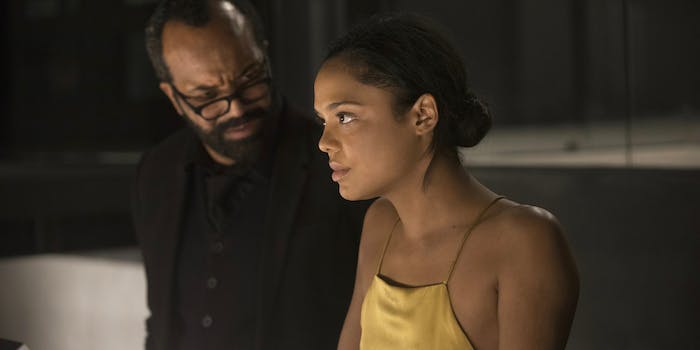 ‘Westworld’ highlights why you should always read the fine print

Warning: This article contains spoilers for the Westworld season 2 premiere.

Westworld (and its titular theme park) contain layers of mystery and intrigue right under our noses, but as we saw in the season 2 premiere, even some of Westworld’s top employees aren’t privy to all the secrets.

In the wake of a massacre led by awakened host Dolores, Bernard and Delos executive Charlotte Hale escape into an underground facility that Bernard didn’t previously know existed to elude detection from other murderous hosts. Although he’s had a hand in programming hosts for years, Bernard is truly out of his element (even before his own body malfunctions on him), particularly as he meets a drone host: a tall, faceless entity who doesn’t speak or have a personality or narrative like other hosts. It’s intimidating, but it hasn’t shown a tendency for violence, partially because it knows Bernard is supposed to be in the facility.

The drone host’s introduction indicates that its sole purpose seems to be collecting data from other hosts in the park. Bernard watched as drone hosts swap a host’s body and removed the orb inside of his head—an orb that we saw earlier in the episode is capable of recording transmissions.

“Are we logging records of guests’ experiences and their DNA?” Bernard asked Charlotte. Charlotte dismisses him, partially because she has a bigger problem on her hands: Delos won’t rescue them until it receives Peter Abernathy, Dolores’ father at the beginning of the series, and the data that’s uploaded to him.

The discovery is a shock to Bernard, who’s seen his fair share secrets and puzzles hidden from him including the nature of his own existence. But for those who’ve read Westworld’s fine print, it shouldn’t come as much of a surprise.

Delos’ official website, which contains multitudes of Easter eggs for fans to unlock, launched shortly before Westworld premiered. One of its features included the ability to “plan” a visit, which allows you to read the contract guests sign before entering Westworld. It got a fair deal of coverage at the time in part for its absurdity and by how much of their rights people gave up by visiting the park. In the wake of Bernard’s discovery, it’s worth revisiting that contract.

Westworld guests sign over a lot by entering the park, but did they agree to give Delos the rights to their DNA? In a word, yes.

The Delos website is a little glitchy after the hosts have taken over Westworld, but you can read the relevant part of the contract as captured and posted on r/westworld in October 2016.

(b) By entering the Delos Destinations Port of Entry, you acknowledge that Delos, Inc. controls the rights to and remains the sole owner of, in perpetuity: all skin cells, bodily fluids, secretions, excretions, hair samples, saliva, sweat, blood, and any other bodily functions not listed here. Delos, Inc. reserves the right to use this property in any way, shape, or form in which the entity sees fit.

We imagine that the people who can afford to travel to Westworld and the other parks that Delos operates probably didn’t read the fine print (or they did and didn’t care all that much) about Delos obtaining the rights to its guests’ DNA and any bodily functions. The majority of Westworld guests are probably more concerned about what they can do in the park and—now that the hosts are attacking them—getting out. But if surviving guests discover that Delos has been collecting their DNA, it’s not like they can do anything about it. After all, they signed that contract and agreed to it.

The question is, what does Delos plan to do with that data? (And is it planning to use the DNA for itself or sell it off to the highest bidder—or both?) As Charlotte said, if they can’t get out of Westworld it doesn’t even matter.