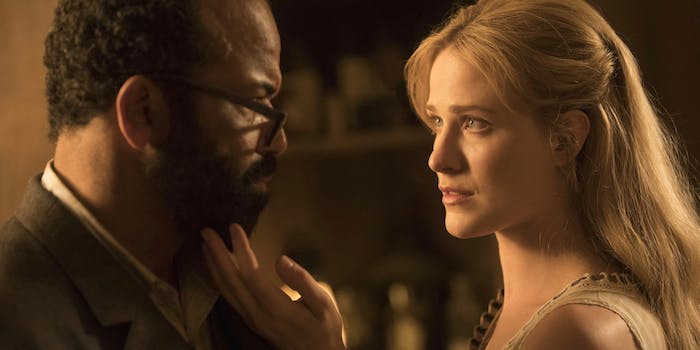 ‘Westworld’ debuted a new theme park—and we have questions

The newest park gives us even more questions.

Ahead of season 2, the creators of Westworld teased that we would visit parks apart from Westworld. And while we caught the tiniest of glimpses of Shogun World at the very end of “Virtù e Fortuna,” it isn’t the first new park we’ve seen.

That honor goes to the Raj, the location of Westworld’s cold open that’s set during British Colonial India. Like Westworld itself, the Raj has a bit of everything with an elaborate building for humans and hosts alike to gather and relax as well areas set up for those looking to go on the hunt.

There we meet Nicholas (Neil Jackson) and Grace (Katja Herbers), two park guests who are drawn to each other. Grace knows her way around the park and how to handle the hosts, but she’s suspicious and doesn’t trust them. But as they discover when a host murders Nicholas, Grace has a good reason to be suspicious, and she’s able to fend that host off before she’s pursued by one of the Raj’s Bengal tigers.

Grace doesn’t reappear until the very end of the episode, but much of the time we’re left slightly confused. We’re thrust into a new park with entirely new characters—save for the tiger whose body Bernard discovered in the season premiere—as characters’ conversations occur on what feels like multiple levels. It’s intriguing, to be sure, and it also sets up more questions and potential mysteries for the season ahead.

Although Westworld’s multiple timelines span decades, Grace and Nicholas’ time together falls during a very specific moment in time. They meet during what looks like a normal day at the Raj. The hosts interact with and serve the guests, and one host tries to entice Nicholas into following one of the park’s narratives. When Grace shoots Nicholas in the chest—her way of determining whether he’s a host—his body is only bruised.

Later on, however, everything has changed. The hosts are capable of inflicting violence, having killed everyone at the campsite; one of them shoots Nicholas dead while the Bengal tiger is able to attack Grace. By the time she is captured by Ghost Nation, she knows that they’ll be able to harm her.

It’s not clear just how much time passed between those two scenes (it could’ve been as little as a single night), but one thing is certain: Ford’s newest narrative, “Journey Into Night” (which allows hosts to kill humans), has gone into effect, and Dolores launched her massacre.

Is his narrative something that Ford enacted in every single Delos park? Is it a gradual sort of update that will slowly spread to the other parks? Or is it only available in certain parks? It’s the kind of question swirling as a samurai on the edge of Shogun World charges at Maeve and her ragtag team of hosts and humans.

What does Grace know?

We only spend a handful of minutes with her, but it’s clear from the get-go that Grace is not your average park guest. She seems to have intimate knowledge of how the park operates—or at least sees beyond the fantasy it offers—and uses that cynicism to cut through the park’s bullshit and the narratives it offers. It’s even her first clue that something is amiss after noticing that the campsite she and Nicholas stop at is empty.

“That’s not how this works,” she responds after Nicholas suggests the hosts disappeared to give them privacy.

She also carries a journal with her, one filled with details and drawings like a map of the area that includes a depiction of the Delos symbol.

Whatever she’s searching for in the Raj appears to go beyond the violent delights that the park can offer. She’s better prepared than most in the host revolution in that she’s able to fight back against the hosts, but she still ends up in Westworld by the end of the episode, putting her mission off the rails or possibly much closer to its destination.

Throughout season 2, the majority of hosts have had a “psychological torture and/or kill first, ask questions later” policy with the humans they have encountered in the park. So far, that doesn’t look like the case with Ghost Nation.

We see the Native American tribe based in Westworld twice during the episode. The first time they ran into Maeve, Hector, and Lee Sizemore, and while they would allow Maeve and Hector to pass, they wanted Lee in return. Maeve refused, but her attempts to make Ghost Nation adhere her commands a la Jedi mind trick didn’t work this time around. They also find Grace at the edge of the lake at episode’s end, and while they’re intimidating, there’s no indication that Grace will be immediately harmed.

During Westworld’s first season narratives, Ghost Nation was known as one of the more violent aspects of the park, but so far, Ghost Nation has not taken part in the violence embraced by the rebellious hosts. Have they been reprogrammed, like Rebus was earlier in the episode? Or are they on their own separate narrative?