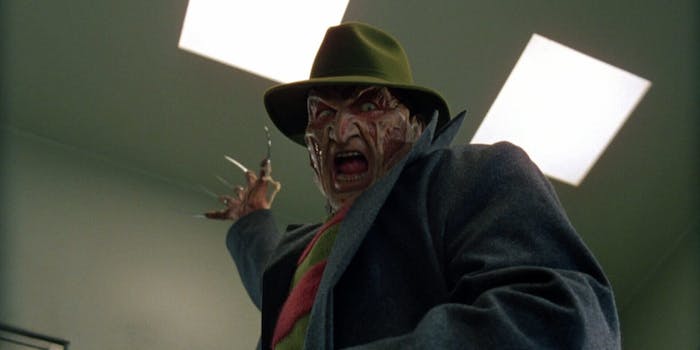 Why you should watch ‘Wes Craven’s New Nightmare’ this Halloween

It's the 'Galaxy Quest' of slasher movies, a self-aware sequel that brought Freddy Krueger into the real world.

If you’re searching for an offbeat Halloween movie choice this year, look no further than Wes Craven’s New Nightmare. Released in 1994, it’s the seventh installment in the Nightmare on Elm Street franchise. But instead of being a straightforward slasher movie, it’s the kind of bizarre and experimental reboot that would never happen in today’s Hollywood franchise landscape. Joker who?

You don’t need to watch all six previous films before this one. In fact, you don’t need to see any of them. You’re an adult. You have access to Google. All you need to know is that the Elm Street franchise features the undead murderer Freddy Krueger, a gruesome chap with bladed fingers, who manipulates the nightmares of suburban teens—and slices them up in real life.

Writer/director Wes Craven is a living legend of horror cinema, starting off with The Last House on the Left and The Hills Have Eyes in the 1970s, launching the Elm Street franchise in the ’80s, and moving onto Scream in the ’90s. Instead of being a direct sequel to the previous Elm Street films, New Nightmare acts as meta-commentary on their popularity. Craven was directly inspired by fearmongering criticism of his own work, using New Nightmare to argue for the necessity of horror stories to exorcise our own demons. Original Elm Street actress Heather Langenkamp returns in the lead role, but instead of playing her original character Nancy Thompson, she plays “Heather Langenkamp,” former teen star of the Elm Street franchise. She’s now a jobbing actress in Hollywood, with a husband and a young son.

The film opens with Langenkamp having a nightmare about Freddy Krueger; a scene that’s both scary and a little embarrassing for her, because she’s obviously friends with Freddy’s actor Robert Englund, a perfectly nice man. Soon after, she receives a phone call from a creepy fan pretending to be Krueger. Things only get weirder when she’s invited to reprise her role as Nancy in another Elm Street sequel, meeting with Wes Craven and studio executives—who also play themselves onscreen.

New Nightmare gradually blends Hollywood satire with the nightmarish world of Freddy Krueger, who has the power to change reality through dreams. It’s both genuinely scary and fascinatingly weird, providing a self-aware spin on the classic horror trope of a woman being terrorized by supernatural forces, knowing that no one will believe her if she asks for help. It’s also kind of the Galaxy Quest of horror cinema, depicting the enduring fandom for slasher movies.

One particular background detail makes this film all the more memorable. The original script featured an earthquake, and reality wound up reflecting Wes Craven’s artistic vision when the 1994 Northridge earthquake hit during the middle of filming. Craven used real footage of the earthquake for New Nightmare, including half-collapsed roads and buildings that symbolized Heather Langenkamp’s increasingly fractured mental state.

Wes Craven’s New Nightmare is available to rent on most major streaming services, including Apple, YouTube, Amazon, and Google Play.