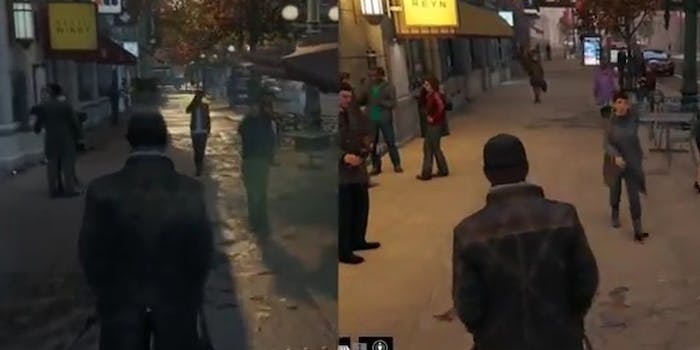 ‘Watch Dogs’ shows why gamers are hyper-critical about graphics

A lot of the hype around Watch Dogs was thanks to the graphics shown in demos. But what happens when the game doesn't live up to the hype?

Every year at E3, developers and publishers show off their games, and naturally want to do so in whatever way puts their games in the best light possible. Running their demos off a high-end Alienware gaming PC makes all the sense in the world, and you will see Alienwares everywhere in booths at the show.

When the game in question is being developed for game consoles as well as for PC, this can set up some cognitive dissonance, especially when you’re at the show playing a demo for preview coverage. Someone hands you an Xbox 360 controller (which is often supported by PC games) but you’re not playing an Xbox 360 build of the game. As a game journalist you come to expect this, but at my very first E3 I remember making the wrong assumption about which version of the game I was actually being shown, more than once.

That’s nothing compared to the dissonance when a game preview is running at resolutions and with effects that not even the best gaming PCs may be able to reproduce when the game is released. When Watch Dogs was revealed at E3 2012, projected onto a huge screen above the stage at Ubisoft’s press conference, the game looked gorgeous. The only conversations I can recall after the Ubisoft press conference that year were about how amazing Watch Dogs looked, and as I was leaving the event my Twitter feed lit up with commentary on the graphics.

Videogamer.com made a graphics comparison video between the E3 2012 reveal footage for Watch Dogs and gameplay video off the PlayStation 4, which is hailed by gamers as the more powerful of the two eighth generation consoles, the other being the Xbox One.

This is a nice object lesson in why unrealistic game demos are a bad idea, because gamers are going to jump all over the difference almost immediately. It may come off sounding hyper-critical, but it may also be taking rightful issue between what was promised, and what was delivered. Enjoy the Reddit thread.