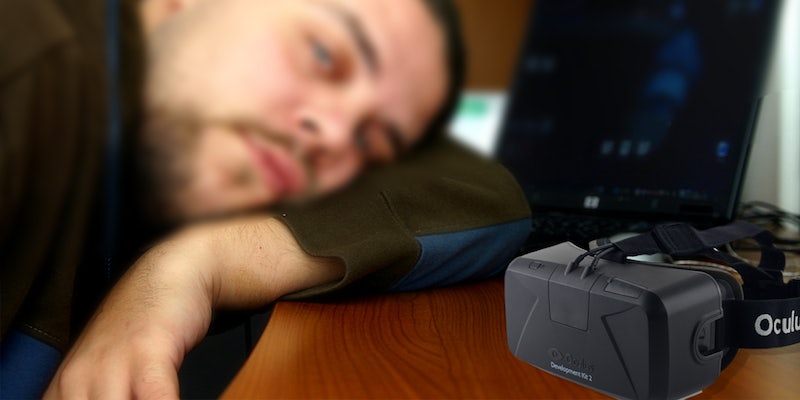 Why does virtual reality make you want to puke?

It may be more than motion sickness.

As virtual reality creeps closer to gaming reality, there’s one major hurdle that may prevent user friendliness, and it’s not cost. People are worried VR headsets will turn them into a vomiting wreck.

Nausea brought about by virtual reality is a serious concern for game and hardware designers. And researchers aren’t totally sure what causes it or if there’s a way around it, other than to stick it out. People who get sick from VR seem to get over it after enough time in the immersive world, but it’s unclear if gamers will be willing to overcome this hurdle.

Designers are going to have to figure it out, though. Based on the atmosphere at the 2016 Game Developers Conference, VR is an inevitability in gaming. But the research into solving this problem of VR sickness—called “simulator sickness” in the scientific lexicon—is at least 30 or 40 years old, according to Kimberly Voll of Radial Games. It’s been a particular focus with the military, she said, because simulator sickness can strike pilots-in-training during flight simulations.

Researchers think the cause for VR sickness is primarily due to a disconnect between what we expect from reality and what we get in the virtual world. This can come through a disagreement in the senses, called “sensory conflict,” like when visual cues from the virtual world tell you that you’re walking through space, but your bodily cues tell you you’re sitting down. The other disconnect comes from a more abstract sense of unfamiliarity. Voll said that the secondary source of nausea has more to do with novel movements, such as flying, and how that general experience conflicts with sensations we’re used to—like not flying.

Sensory conflict is a more familiar concept when it comes to sickness—it’s the prevailing theory behind motion sickness as well. Voll explained that sensory conflict might make us sick due to its similarity to the effects of neurotoxins.

“Poison will make you feel dizzy and weird,” Voll said. The body’s reaction is to get nauseous and vomit—to try and expel the poison. “Sensory conflict brings about a reaction akin to being exposed to toxins and things in the world, and our body responds appropriately.”

In order to function in the real world, our brain has to construct an idea of where our bodies are in space based on a number of senses. These senses include vision, as well as the vestibular “balancing” system in the inner ear, and signals from our limbs that form what’s called proprioception. So if your inner ear and limbs are telling your brain that you’re sitting upright and still, but your eyes tell you that you’re moving through space, it’s going to be very disorienting and difficult for your brain to come up with a coherent sense of reality.

It can be just as disorienting if you expect there to be a desk in front of you, but your hands clip through it when you try to put something onto the desk. Other triggers can come from the frame rate, or the rate at which the VR headset projects images to your eyes. If that frame rate is below the rate at which your brain can process those images, it looks very eerie, causing some people to feel nauseous.

To a certain degree, virtual reality sickness may go away on its own with enough time spent in a virtual world. But it’s hard to say if the prospect of having to tough out bouts of nausea—coupled with the steep price tag for VR—will provide too great a hurdle to attract a viable market.

Voll said she hopes that VR designers won’t simply default to assuming users will get used to the strange sensations that come with virtual reality.

“We want to be very measured in how we use that as a solution,” she said. “If we’re always like, ‘Oh well players will just get used to it,’ that gets in the way of doing a more rigorous design.”

These designs include making sure the frame rate is high enough to not trigger nausea, while maintaining good graphics. Creating soundscapes that are congruent to the virtual environment are also important, Voll said. Currently, many of these technical demands don’t come cheap, which is part of why VR rigs are so expensive. But there are other things that users can do that may help curb the nausea, such as deep breathing or simply not spending too much time in VR.

Voll thinks that allowing yourself to be totally immersed in VR can help, too. To a certain extent, trying out VR in a demo environment, like one might encounter at a gaming convention, can be a bit difficult.

“We ask a lot of people. Put on this giant heavy mask, give into another world, while you’re surrounded by other people,” Voll said. “That’s a massive trust question there.”

The awareness of other people standing near you, while the VR headset is telling you you’re alone in a big empty field, for instance, can bring up that cognitive dissonance and maybe bring up your lunch, too, Voll said. But in the comfort of your own home, where you may feel less self-conscious, it might be easier to allow yourself to be immersed.

Voll added that there is a lot of “due diligence” designers need to do while asking themselves important questions.

“How does this affect developing minds; what does this do to kids?” She asked. “[What happens with] long-term exposure? The systems in our bodies work because they’ve served us well. We should try to understand what that means.”