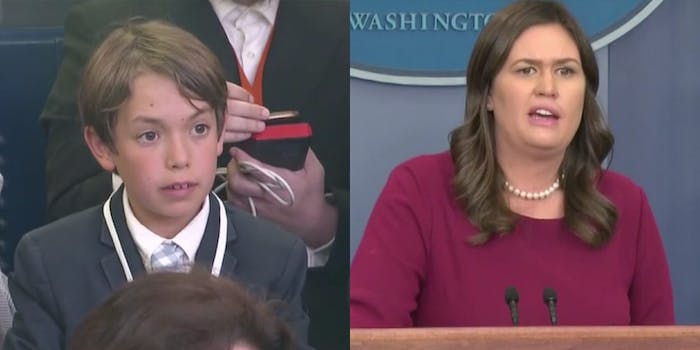 'There is nothing that could be more terrifying than for a kid to go to school and not feel safe.'

In a White House briefing Wednesday, a 13-year-old student journalist had the chance to ask press secretary Sarah Huckabee Sanders about one of the most prevalent issues plaguing young people in America today. His question nearly brought Sanders to tears.

“One thing that affects mine and other students’ mental health is the worry about the fact that we, or our friends, could get shot at school,” said the young reporter, Benje Choucroun, representing Time for Kids magazine. “Specifically, can you tell me what the administration has done and will do to prevent these senseless tragedies?”

After getting choked up, Sanders responded to Choucroun’s concerns.

“I think that as a kid and certainly as a parent there is nothing that could be more terrifying than for a kid to go to school and not feel safe,” she said. “So, I’m sorry you feel that way.”

Sanders continued by ensuring Choucroun that President Donald Trump’s school safety commission will hold another meeting this week to discuss ways that the administration can “…  do every single thing within our power to protect kids within our schools and to make them feel safe.”

According to a report released by CNN, there have been 23 school shootings in the United States in 2018, and we aren’t even halfway through the calendar year. On average, that’s a little more than one school shooting per week. Data from the Gun Violence Archive shows that last year was the deadliest mass shooting year in American history with 346 mass shootings and 15,619 deaths recorded.

As a result of the February shooting at Marjory Stoneman Douglas High School in Parkland, Florida, where 17 victims were killed by gunman Nikolas Cruz, students across the country have come together to mobilize against gun violence in America. But politicians have been slow to act on gun control regulation.

Users took to Twitter to express their frustrations with Sanders’ answer, saying it was worrisome that the press secretary could not provide Choucroun with further details about a plan to attack the crisis head on.

I don’t care that Sarah Sanders “chokes up,” I care that she doesn’t have an answer to this boy’s question. https://t.co/npEO6zgTwN

Choucroun’s question came just a couple of weeks after a shooting in Santa Fe, Texas, where 10 were killed. According to Sanders, Trump is set to meet Thursday with some of the victims’ families in Houston.