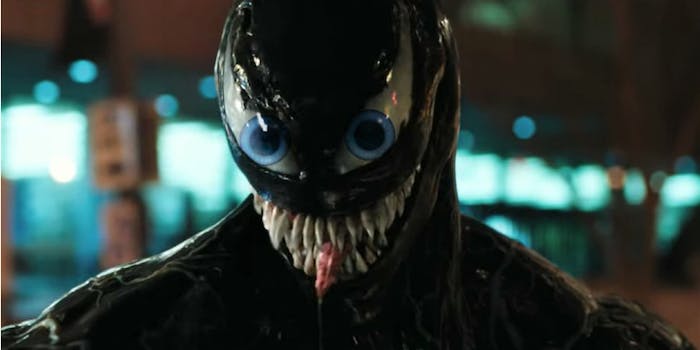 You can never unsee Venom with googly eyes

Have you ever wondered what Venom looked like with his own set of eyes? Well? Regardless of how you answered, now you know.

But what if Venom had eyes? pic.twitter.com/Kl8TwI3rqz

The edit from Matthew Gaydos places a pair of eyes into the white, ink-like part of Venom’s costume that acts as his sockets, turning it into a set of screwed up eyeballs. It’s a stark contrast from his traditional costume (and lack of pupils and irises) and the somewhat similar design of Spider-Man’s iconic outfit—which has a thick black outline around the white sockets—so the result is immediately both jarring and silly.

And it’s not the first time, either. After the first Venom trailer was released, someone else added googly eyes in GIF form.

But what is it about them that makes these eyes stand out? Is it the size of them? Or is it the color, which feels even more out of place in the grim and dark (from a literal color palette perspective) world that Venom inhabits? Or is it just the juxtaposition of an intense stare and those eyeballs that makes Venom at his most intimidating that much harder to take seriously?

Good luck with those nightmares tonight.