If you've missed the legendary vampire hunter, he'll be back very soon.

It’s the mid-’80s. At your local Blockbuster, there’s a single narrow shelf dedicated to anime—cartoons from Japan that have a very different tone from what you grew up watching on Saturday mornings. There’s only a few titles to choose from, but the art on the covers is unflinchingly dark. You stare at the unusual names with wonder: Ghost in the Shell. Akira. Vampire Hunter D.

These titles would go on to become the foundation of a movement in America that embraced anime, giving each legendary status among fans. While Akira remained a standalone, Ghost in the Shell became an ongoing franchise in manga, anime, and most recently live-action film. In contrast, the last Vampire Hunter D film was 2000’s Bloodlust, despite there being plenty of source material in the dozens of novels in the series from creator Hideyuki Kikuchi. The void in the franchise in America seemed like a missed opportunity.

Luckily, the folks over at Unified Pictures believed D could come back. The company launched a Kickstarter in early July for a new Vampire Hunter D comic book based on an unpublished story gifted to a fan by Kikuchi. Called Message from Cecile and published by Stranger Comics, it brings D to what may seem like an unusual destination for a vampire hunter: space.

The idea of the comic project came up when Unified Pictures creative executives Scott McLean and Kurt Rauer were introduced to Digital Frontier, a Japanese film/CG studio that has worked on franchises like Tekken and Metal Gear Solid.

“They were looking to expand their reach and footprint, and they reached out to ask how we could work together,” Rauer told the Daily Dot. “That was about a year and a half ago. We decided the best way to get the ball rolling is to start at the most accessible place, and that’s really comics. We can see what the fans are into, get direct feedback.”

McLean and Rauer were given everything in the Vampire Hunter D catalog to look at. After sorting through a wealth of material, they settled on the idea of adapting one of the unpublished short stories to comic form.

“I was the third person to read this in English,” McLean said. “So we sent it around to the team, and thought it was a great story, but it doesn’t fit anywhere else because it’s the only story set on Mars. That’s when one of our writers suggested a comic book.” 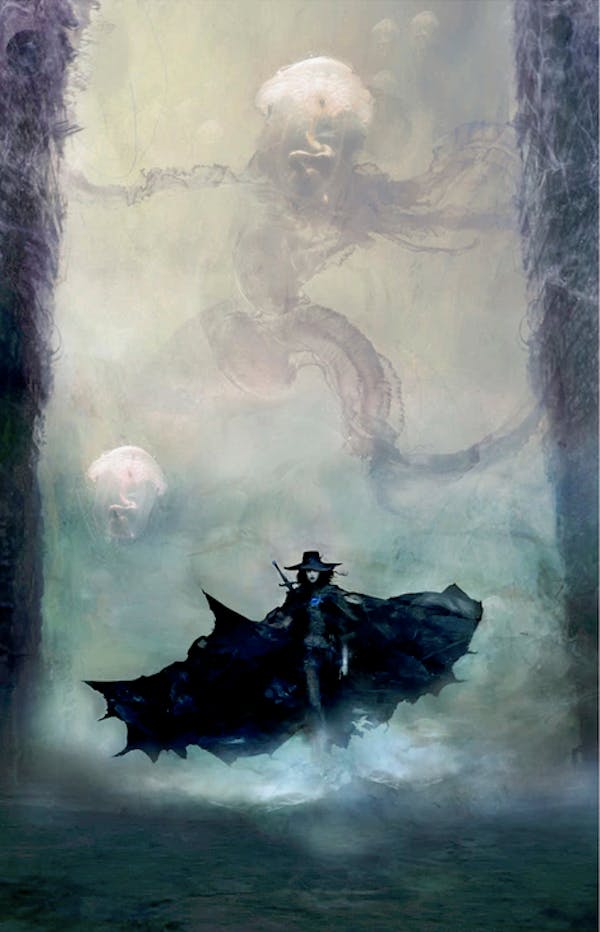 Illustrated by Michael Broussard and adapted by screenwriter Brandon Easton, Message From Mars is a prequel to the films we’ve seen in America. A human colonist named Cecile tells the story of how the vampire nobility rose to power after a nuclear war on Earth, as well as how D became a vampire hunter.

Rauer and McLean said that the project is just the beginning of what they hope will be much more Vampire Hunter D content, including an animated feature. Fans have already tripled the comic’s $25,000 crowdfunding goal, with more than week left before the campaign is over.

“After the first series of books for Message to Mars is done, we have what the next series will be on its heels,” Rauer said. “So we think D can inhabit the comic space. I mean, we could do it for the next 20 years—there are 34 novels. Add in side stories, and there’s around 50. And then there’s derivative works like Greylancer.”

The team has also come up with unique items for the Kickstarter’s high-tier backers, such as a replica of V’s hat brooch and a model of his infamous talking hand. But these items may take a little longer to deliver than the comic itself, which Rauer says is actually running ahead of schedule. 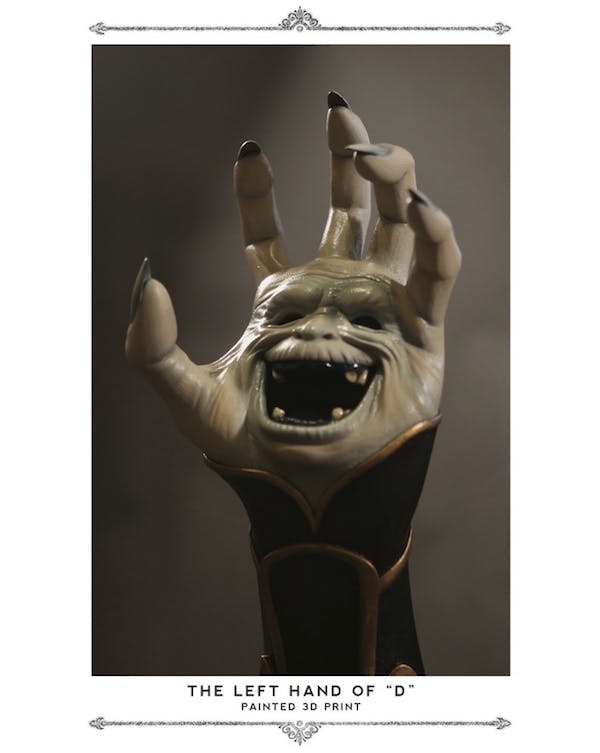 “We have an internal delivery date that is at the end of August,” Rauer said. “For people who want something autographed by Kikuchi-san, there’s going to be at least another month on delivery. They’ll get all their other stuff coming out of the U.S. on time, but the signed stuff has to go to Japan, clear customs there, come back, clear customs here, and then be sent to them.”

Rauer and McLean are both well aware that they are enjoying a rare opportunity in working directly with Kikuchi. It’s unusual for a Japanese content creator to make a product in an American format. Luckily, Digital Frontier was directly associated with Kikuchi’s publisher, making it possible to open the lines of communication.

While Kikuchi is not intimately involved in every step of the production of Message to Mars, Rauer says that it’s clear he has been very thoughtful about the project and how it will translate for the American reader.

“He hasn’t been the guy that has said no to ideas without reflecting upon them and giving us some reason why he doesn’t feel it works,” Rauer said.”For instance, we said that for a Western audience the left hand is going to have to have much more personality because D is the strong silent type. In Japan he works really well, but for a broader audience it might not. Kikuchi-san said that made perfect sense to him and he that he liked it.” 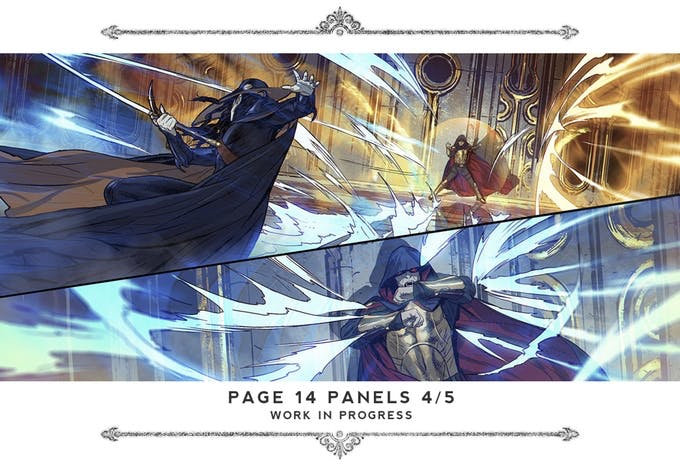 “One of the first questions I had for him after reading the novels was ‘Where’s the map?'” Rauer said. “He asked Kikuichi-san for us, who told us there was no need for it. That’s the difference between a Western reader and a native Japanese reader. (The latter) may be more interested in the journey within D, while we’re interested in the topography of where that exists.”

Rauer believes that the cultural timeframe strongly influenced the tone of the novels. The first novel series was published in 1985.

“In Japan they were experiencing an economic boom and most Japanese corporations at the time were completely male-led,” Rauer said. “There’s still a bit of the damsel in distress. The second movie is much more modern. I think the way that Kawagiri directed that film is more western in its take. The female character is a bit stronger and more fully realized.” 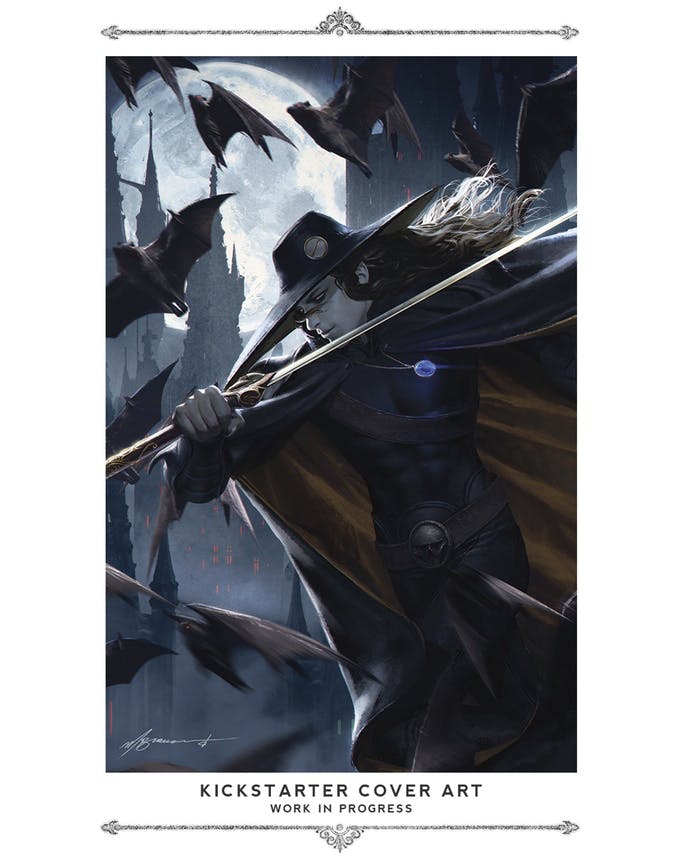 Working on a Vampire Hunter D project is a thrill for both Rauer and McLean, who both discovered anime at a young age. Rauer first saw Akira in a San Jose theater, then drove up to San Francisco to see it a second time. It opened his eyes to how the rest of the world was doing animation, a thought that’s now natural in America thanks to anime’s massive influence.

For McLean, who is part Japanese, anime was a part of his life as soon as it began. He recalls receiving an important gift in the mail from his mother when he was three: a VHS copy of “Macross: Do You Remember Love?“

“When I was four I saw the original Power Rangers in Japan,” McLean said, smiling at the memory. “It’s incredibly dark! I mean really dark. So that was my starting exposure to all of that.”

As McLean grew older, he fell in love with watching anime on TV late at night. It aired far past his bedtime, but he found a way to see it anyway.

“There was a broadcaster that, one night a week between 11pm-3am, would show anime movies,” McLean said. “So I would sneak out of my room into the kitchen and turn the volume down really low and watch what they were playing. When I was 10 or 11 years old one of them was Vampire Hunter D.”

Rauer says that the Kickstarter’s success helps them to plan for the future of the project and for a full-length animated series.

“Yoshiaki Kawagiri (director of Bloodlust) is our supervising director in Japan, so there will a continuity for the animated series,” Rauer said. “We don’t like talking too much about this series since it hasn’t been picked up yet. But, we’re in that place where we are developing it to take to studios to pitch. I think it’ll find a great home.”