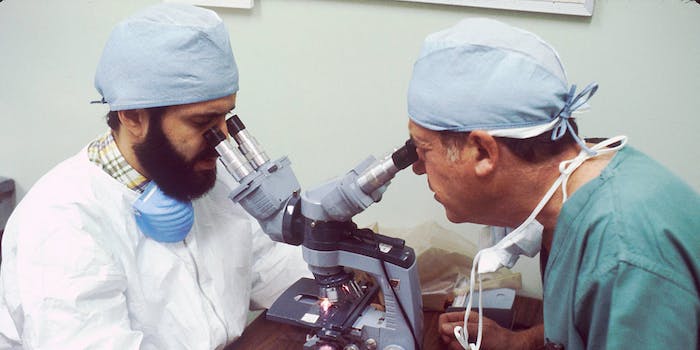 Unfortunately, the Internet remains a great sounding board for anti-science sentiment.

Based on all the anti-GMO, anti-vaccine, and generally anti-science sentiment on the Web these days, you might think that most Americans oppose scientific progress. But a new Pew survey on Americans’ attitudes about advances in biotechnology suggests something different.

Pew interviewed Americans about their views on various uses of biomedicine. Most people (85 percent) said that they opposed the idea of using genetic-modification techniques to improve a baby’s intelligence, but 46 percent approved of using genetic modification to reduce the risk of serious disease.

On the whole, people were more supportive of using bioengineering to manufacture organs for transplant. Approximately three-quarters of Americans (74 percent) thought that the practice was an appropriate use of medical advances.

More than two-thirds of respondents (68 percent) said that childhood vaccines should be mandatory, whereas 30 percent said that parents should be allowed to decide. (Nearly everyone in a population must be vaccinated to achieve herd immunity to protect those too weak or too young for vaccines.) Younger adults were more likely to think vaccines should be optional. But 83 percent of U.S. adults considered vaccines to be generally safe.

It’s hard to say whether the numbers reflect the perception of anti-science sentiment on the Internet or if people who oppose things like genetic modification and vaccines are simply really good at spreading their messages (even if that message is ultimately disregarded). Conspiratorial and skeptical tweets resonate, because they reflect a very natural distrust of certain aspects of medicine.

The current controversy over gene-editing research harkens back to the controversy over cloning. When scientists cloned Dolly the sheep in 1996, it led people to worry about what might happen if we began cloning humans. That concern has largely died down; the same might happen with gene editing.

Meanwhile, the public has always distrusted vaccines at some level since their inception.