The strange and frightful tale behind Tumblr’s Skeleton War

It's a Halloween meme to remember.

Warning: This story contains adult language that could be offensive to some readers.

In the rich narrative history of Tumblr, there is one fine tradition that comes round every year: the Halloween meme.

Last year’s meme was inspired by the overabundance of misspelled Halloween decorations that proclaimed themselves to be “spoopy” and “creppy,” but this year’s is rather more complex. 2014 will go down in Tumblr history as the year of the Skeleton War.

The Skeleton War originates from a tweet by Weird Twitter prophet @dril, which spent a year percolating through Tumblr’s love of skeletons before spawning the true Skeleton War mythos.

October is now Skeleton War History Month, celebrating the heroic conflict between a skeleton army and their revolting enemies, the fuckboys. For a surprisingly helpful definition of what “fuckboy” actually means in this context, we refer you to Urban Dictionary, which describes various fuckboy traits including “relies on his mom but doesn’t respect women,” and “looks like he just read one of jaden smith’s tweets in all of his selfies.” For example, “connor who won’t calm down with his axe spray tryna infect ya lungs cause he’s a fuckboy.”

Essentially, a fuckboy is somewhere between the male version of a basic bitch, and one of the failed Casanovas from the Straight White Boys Texting blog. Fuckboys won’t rest until you’ve given them your Kik, and they will always insert a demand for nudes into the most inappropriate of conversations. 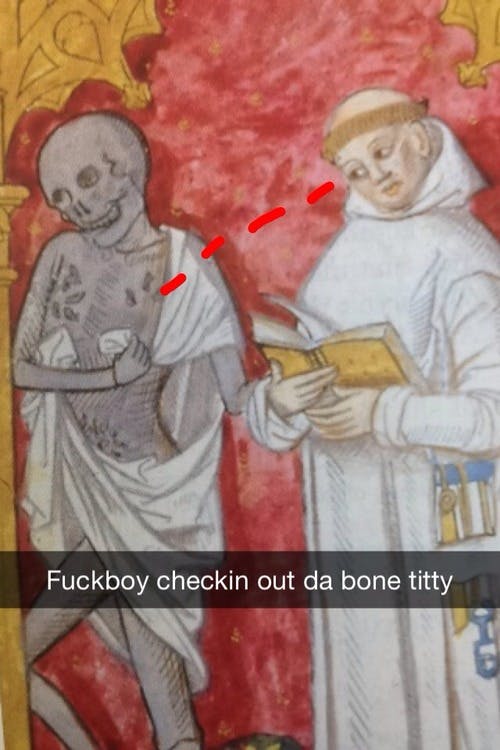 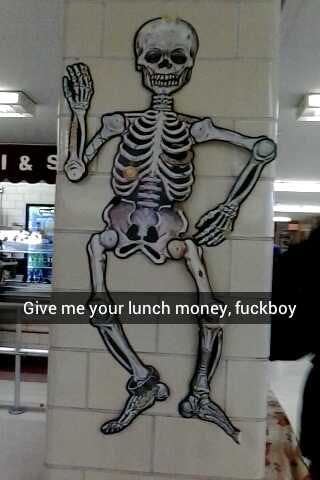 Happily, the skeleton army is here to fight them off. Their rallying cry is “En garde, fuckboy!” (seriously, someone recorded a skeleton war battle speech), which explains the Skeleton War subreddit /r/engarde. It’s difficult to tell when fuckboys became part of the concept of the skeleton war, but the past three weeks of frantic meme-development have proven that the fuckboy aspect of this timeless epic is here to stay. 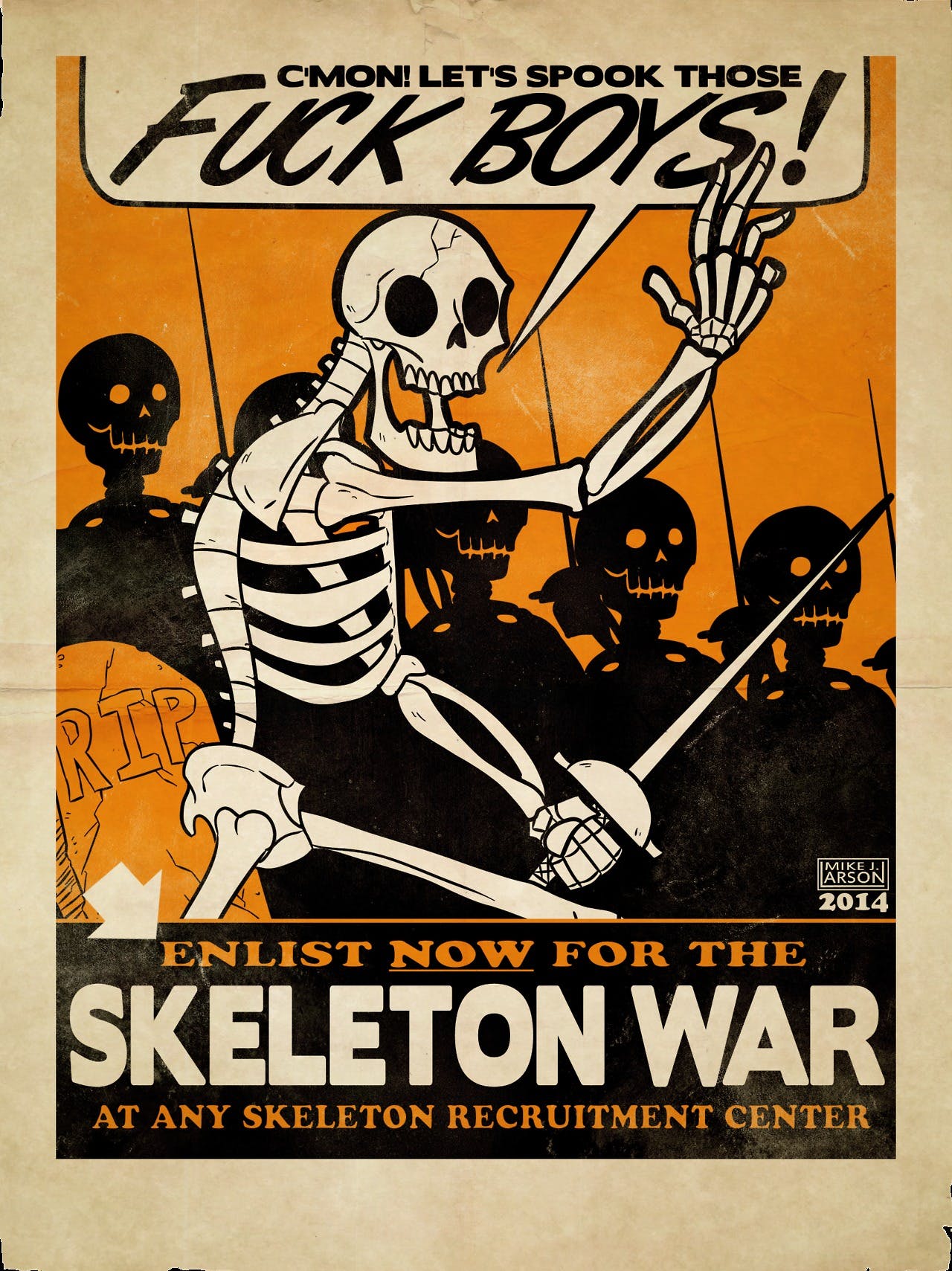 The overwhelming popularity of the Skeleton War can be broken down into three factors. First of all, pretty much everyone on Tumblr is already in agreement that skeletons are awesome. Second, it’s entertaining to tell ridiculous stories about destroying fuckboys using a skeleton army. And third, the prevalence of plastic Halloween skeletons means that you can easily create your very own Skeleton War photo.

The first of many casualties in the skeleton war. pic.twitter.com/GgFf9x3jTo 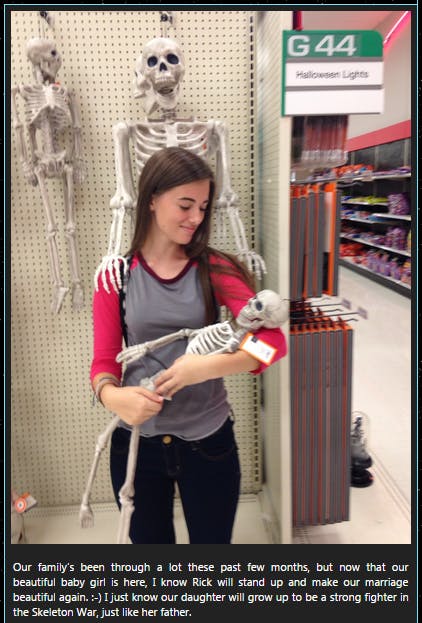 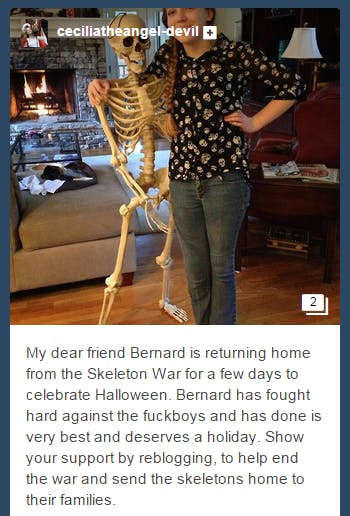 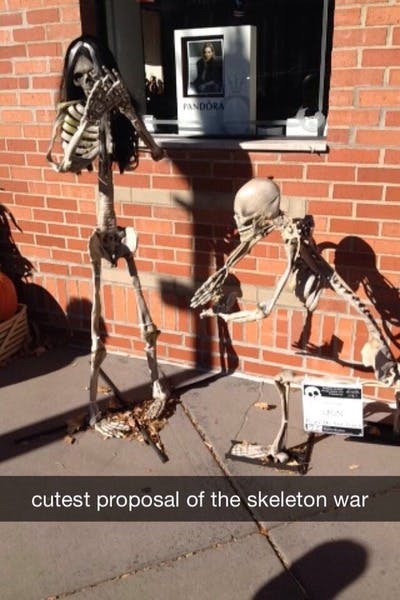 The past month’s respectful observation of Skeleton War culture has been both impressive and educational. But soon enough it will all be over. Halloween marks the end of Skeleton War History Month and as we all know, Christmas begins on Nov. 1.