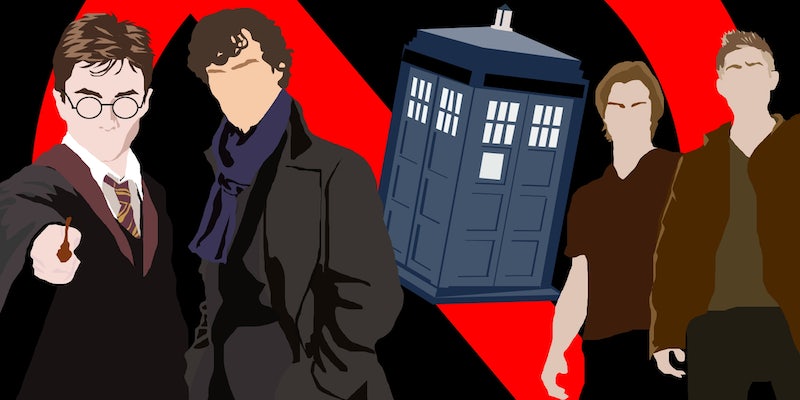 The rise of the anti-fandom fandom

The phenomenon has become Tumblr's Newton's Law: For every great fandom, there's an equally vocal anti-fandom, bringing it down a peg or three.

The Tumblr Your Fave is Problematic (YFIP) has one purpose: making sure you have a list of all the uncool things—read: racist, homophobic, sexist, ableist, sizeist, transphobic—your favorite celebrity has allegedly done or said. Normally it flies under the fandom radar, serving its intended purpose as a resource for people looking for the other side of the endless waves of praise that fandom can bestow on its chosen heroes.

But when it made an extensive list last month of problematic things that acclaimed young adult novelist and resident Tumblr saint John Green has done, said, or written—including his appropriation of Cinco de Mayo, his creepy tale of trapping his wife into a first date, and his references to fat-shaming—the backlash was immediate. 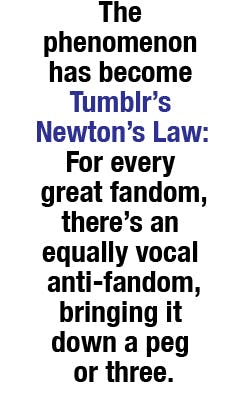 Reblogs calling the Tumblr “dumb”, “reaching,” or “missing the point” were numerous, while several people pointed out that Green had apologized or negated many of the items listed. The list underwent extensive editing as his fans pointed to new context assuaging them—particularly Green’s writing an entire novel, Paper Towns, specifically to debunk and call out the problematic Manic Pixie Dreamgirl trope he had written earlier on in his career.

“It’s so hard to listen to all this crap they keep spouting about people,” wrote a fangirl named Emma after reading many of YFIP’s backlog of beloved Tumblr celebrities doing not-so-beloved things.

Emma had just stumbled across a corner of Tumblr known as anti-fandom: blogs designed to call out problems and criticize fandoms, both their source materials and associated creative team, and the behavior of the fans who are in them.

There are plenty of fandom confession blogs, which allow fans to vent about things they don’t like in their fandoms. But anti-fandom blogs, which often have the urls “shutup[fandomname]” or “ugh[fandom]”, are different. They’re often carefully curated around social justice themes that bring a level of severe criticism to the discussion around fandoms.

The phenomenon has become Tumblr’s Newton’s Law: For every great fandom, there’s an equally vocal anti-fandom, bringing it down a peg or three.

STFU Moffat, for example, is a space dedicated to the apparently endless litany of complaints about Stephen Moffat’s white straight male privilege, and all the racism, sexism, homophobia, and other unpleasant things that make it into his shows as a result.

“[Moffat is] a misogynistic asswipe who reduces the women in his shows … to plot devices and damsels in distress, and is openly disparaging about women,” reads one vehement reblog. “[H]is racism is evident first of all in his overwhelmingly white cast (which has been an issue since the reboot and likely since the start of the show but has gotten worse in moffat’s run in comparison to [Russel T. Davies’] not to mention his placement of poc as antagonists … there’s a whole lot more where that came from.”

Surprisingly, Tumblr’s anti-fandom spaces are just as likely to be inhabited by actual fans attempting to critique the thing they love. “We don’t hate DW or Sherlock, in fact we really really like those shows,” states the STFU Moffat Tumblr. “That is why we’re being critical.”

“[T]his is just a side-blog where I voice my anger and frustration with certain shippers of the Teen Wolf fandom,” states the owner of Shut Up, Teen Wolf Fans. Similarly, Ugh Sherlock Fandom is run by a self-professed member of Sherlock fandom dedicated to calling out “specific dumbass posts.”

The list of anti-fandom Tumblr blogs appears to be endless but can generally be found by Googling the words “ugh,” “STFU,” “shut up,” or variations thereof, along with your fandom of choice. Some of the anti-fandom Tumblrs, like Ugh Fandoms-in-general, receive moderated submissions and touch on a wide variety of fandom peeves, both petty and political.

Others, like Your Fave is Problematic, are purely focused on social justice concerns. YFIP rounds up comprehensive records of arguably racist/sexist/homophobic and generally culturally insensitive or otherwise tone-deaf behavior of celebrities. Although YFIP has repeatedly stated it is just serving as a resource and not as a discussion community, it sometimes gets caught up in the furor of outrage surrounding its own posts.

“No one is saying these celebrities are inherently terrible people who should not have any fans, no one’s trying to demonize them,” a YFIP mod explained after the aforementioned John Green post. “We’re just making their problematic behavior, as well as their responses to criticism over it, readily available.”

But in fandom, harshing the squee is never an easy proposition—especially when, as in Green’s case, the problematic person may be able to answer back. In Green’s own words, responding to YFIP, idol-worship is a dangerous, perhaps even socially irresponsible thing:

In general, I think it’s good not to worship those you admire. It’s important to understand that all people are flawed and make mistakes and say stupid/cruel/hateful/inappropriate things. And it’s good to hold those people accountable. But it’s also possible to like someone who is flawed. In fact, it is more or less necessary.

“These ugh fandom blogs are basically gods,” declares Ugh HP Fandom, “for being aware that while everyone has their own opinion, there are just things that are really not ok and every fandom has a shitty side.”

But the concept of an anti-fandom as a fandom all on its own may have arisen from K-pop fandom, where “Antis” have been at work for years bonding around their dislike of certain band members.

At first glance, an anti-fanvid looks like any other K-pop fandom tribute on YouTube: clips of members of wildly popular vocal group Girls’ Generation (SNSD) dancing, singing, and performing. But then the background music turns sinister, the close-ups hone in on one girl member, and the video starts to attack her: her dancing, her singing, or her behavior.

In Korean pop fandom, Anti-fans are just as vocal and committed to passionately criticizing their target band as fans usually are. The key difference is that Antis sometimes heavily scrutinize footage looking for evidence of their least favorite member’s wrongdoing. And with the anti-fan messages come “anti anti” fan videos, or fanvids, messages of support and “don’t listen to the haters.”

On YouTube, K-pop fans and anti-fans argue and debate one another in precisely the same way that fans do on Tumblr, with the same amount of resentment that one group is coming into what is seen as the other group’s turf in order to spread their message.

On Tumblr, the mantra “don’t tag your hate” is seen as a general rule for fandom, but it hasn’t stopped fans from clashing repeatedly on hotly debated topics, like Sherlock vs Elementary, One Direction’s ship wars, or Sterek vs every other subject in Teen Wolf fandom.

But when does social critique cross the line into fanning the flames of hate? A recently formed Tumblr, Hate Help Hotline, attempts to send good vibes to anyone who needs it to counteract what seem to be endless waves of hate mail sent via Tumblr inboxes. When asked when calling out poor behavior crossed the line into hate, the Hotline said venturing into personal attacks was the key; but for larger fandom conversations, the general feeling seems to be that just being critical of something is enough to warrant the moniker of being a hater—and enough to warrant dishing out the hate in turn. Your Fave is Problematic had to turn off its ask box after reportedly receiving a plethora of death threats directed both at them and the subjects they were calling out.

In a post on Ugh Fandoms in General called “Let’s Talk About the Anti-Fandom Fandom,” a reader vented about the culture of hate they felt the anti-fandom Tumblrs were breeding:

The anti-fandom is its own fandom now. There are rules — what fandoms and people you can like, and who you can’t — they’ll hijack posts and participate in all the same types of behaviors from the fandoms they hate. …

I’ve seen many angry people clearly following fandom-associated blogs and such just so they can mock it. Here’s the thing: if you hate the fandom and claim you no longer like the show/movie/book because of said fandom, why exactly do you devote so much time to being an asshole about it?< <

Taking this sentiment even further, theworstofwhimsy wondered why the social justice component of Tumblr fandom had evolved to begin with:

what does fandom have against letting people be unrepentantly horrible

why can’t you love them for being unrepentantly horrible

The answer, of course, is that in an increasingly diverse, increasingly mainstreamed fandom, the number of cultural and political clashes is increasing all the time. But there’s also a definite element of vicious glee involved in pointing out the foibles of the fandoms around you—your own and others. On Tumblr, confession blogs exist in the tens of thousands, and “hate” seems to have become just another word for venting spleen.

Calling “anti-fandom” a fandom of its own seems like too easy a label to attach to the phenomenon of social critique that has sprung up around fandoms recently (though having an easy label might more easily allow the fans on the receiving end of the criticism to write off the criticism itself).

It’s complicated and convoluted. The distinction between fan and critic, advocate and antagonist is widening but blurring with every baited reblog. And as anti-fandoms continue to grow along with fandom itself, it seems to be a divide that won’t be shrinking any time soon.