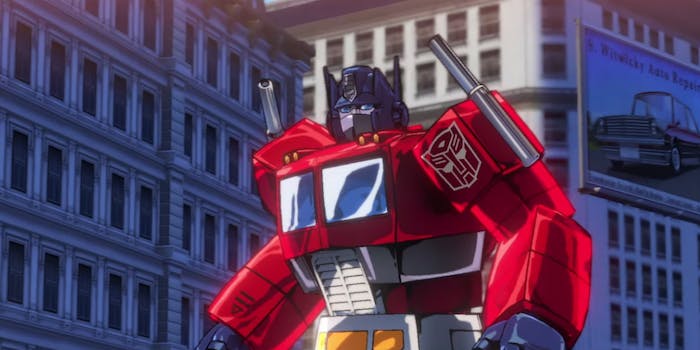 Finally, a Transformers game made in the 1980s cartoon universe.

The original Optimus Prime and Megatron that a generation of now grown-up geeks fell in love with are finally getting their own video game.

Transformers: Devastation is a brawler that draws its characters and their depictions from the G1 universe—the original animated series and comic books that were released concurrently with the very first generation of Transformers toys. For Gen-X Transformers fans, the G1 universe is the original, authentic universe, and it’s been sorely underrepresented in the video game world.

Judging from the trailer, Transformers: Devastation is straight-up G1, and Peter Cullen and Frank Welker, the first actors to depict Optimus Prime and Megatron, are reprising their roles.

Transformers: Devastation is being developed by Platinum Games, the Japanese studio that created the Bayonetta series, Metal Gear Rising Revengeance, and is currently developing Star Fox Zero for the Wii U. It will be released later this year for PC, PlayStation 3, PlayStation 4, Xbox 360, and Xbox One.