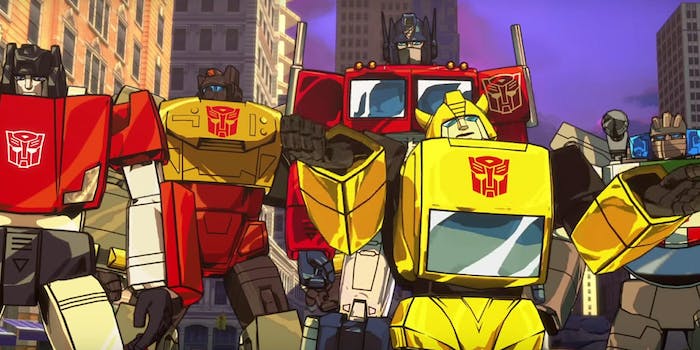 Transformers: Devastation is too much about the nostalgia, too little about the game

Re-live your childhood adventures with the Autobots and Decepticons.

The trailers for Transformers: Devastation made it impossible for fans of the beloved 1980s cartoon version of the Transformers not to be excited.

That passionate response is what makes the end result so potentially devastating.

For Gen-X’ers, the original universe is the authentic universe. When we think about Optimus Prime, we’re likely to remember the Generation 1 version first and foremost. This is the audience for whom Devastation was made, which is made clear by the lack of any introduction when Devastation begins. Developer Platinum Games assumes that you know what’s going on, and takes no steps to account for anyone who doesn’t.

The same lack of early explanation also applies to some of Devastation’s basic systems. It’s been a while since I played a game this tutorial-poor. I actually had to go to the Activision website and download a copy of the manual to answer questions about how the game worked. It left a horrible first impression, and made Devastation feel messy and unfinished.

By the end of the first chapter, initial annoyance gave way to surprise at learning that Devastation was more than the simple brawler action game I’d expected. There was a good amount of ranged combat alongside the brawling, and a pair of crafting systems, while simple, were totally unexpected and added some texture to the experience.

There was more than meets the eye to Transformers: Devastation, but I can’t say it was the fun of the brawling, transforming, driving, and crafting that kept me playing. Devastation is all about the Transformers license, more so than any Transformers game I’ve played, and fandom can easily cover up the flaws in any game. In Devastation, Megatron and his Decepticons have unearthed an ancient Cybertronian spacecraft, called the Proudstar, that crashed on Earth millennia ago. Megatron is trying to use the ship to Cyberform Earth into a copy of the Transformers’ home of Cybertron.

The machine has already turned the city (don’t ask which city, I have no idea) into an amalgam of human construction and Cybertronian roads and walls, with a huge Decepticon fortress towering over downtown. The giant tentacles of the machine rip through buildings, and gigantic engines throw their exhaust across the city.

Five Autobots have stepped up to thwart the Decepticons’ plan: Optimus Prime, Bumblebee, Sideswipe, Wheeljack, or Grimlock. In each level you play one of these five characters, and have opportunities within each level to switch between characters.

Fighting is focused on traditional, brawler-style gameplay where you use attack combination moves, a dodge move that slows down time and gives you an extended opportunity to parry, and powerful Vehicle Attacks where you transform and barrel into your opponents.

Each Autobot also has a super attack that plays into their character. Optimus Prime transformers into a truck, attaches to his trailer, and swings around in a wide circle that will damage any Decepticon in the attack’s radius. Sideswipe’s super attack uses his shoulder-mounted missile launcher to pound the area in front of him with powerful explosions. Bumblebee throws a bunch of explosives because he’s a saboteur. If you know the characters, the super attacks are really fun to watch.

The gameplay gets tedious, however, even with the cool super attacks, the smooth ability to transform from robot to vehicle with the authentic transformation sound that any Transformers fan will instantly recognize, and little reminders of the cartoon like having your gun pop out the roof of your vehicle.

You will rely on one attack far too often. There are shield barriers that can only be broken when the Autobot is in vehicle mode and driving at very high speeds. The character transforms and, carried forward by their tremendous velocity, throws a powerful melee attack that cracks and breaks the shields.

This charged, vehicle attack is too good not to spam at enemies, so you’ll transform, build up some speed, smash into someone, throw a few melee attacks, and transform again to rinse and repeat. It gets mindless. You can try to be more creative with your attacks, but going back to the proven tactics always felt inevitable. What kept things exciting wasn’t the fun of the fighting, but the nostalgia of recognizing who I was fighting. The Constructicons, the six Decepticon construction vehicles who combine into the iconic Devastator, have special attacks that play off their characters.

Mixmaster the cement truck spews acid pools out of his cement tank, Hook snags you with his crane and you have to break free, Bonecrusher the bulldozer runs you over—but if you’re smart, your attack patterns will be precisely the same against all six Constructicons.

What keeps the fights interesting isn’t learning the Constructicons’ attack patterns and countering, but “Dude! I’m fighting against the real Constructicons! I love the Transformers, and that’s awesome!” Strip away the nostalgia, and the raw game beneath becomes much less appealing.

Of course licensed games draw on the license appeal to sell copies, but the best licensed games don’t depend on that appeal. War for Cybertron and Fall of Cybertron were clearly made for Transformers fans, but had cool stories that took place on a variety of level designs.

Transformers: Devastation repeats the same environments over and over again. You will recognize the same parking lots, streets, and parks from dozens of different battles. Meanwhile, the Autobots exchange corny dialogue that sounds like it was written for the same children that watched the 1980s cartoon, and even the most rose-colored glasses can’t help if you go back and watch the original series, which is awful. I did not expect to find crafting systems in Devastation, based on the simplicity of the game’s premise. But when the Autobots return to their spaceship, the Ark, you can synthesize all the melee and ranged weapons you pick up as loot and in arms caches spread throughout the city into more powerful versions of themselves by fusing the weapons together.

There are different elemental types of weapons, but it never felt like Burn weapons were markedly different than Freeze weapons. The class of a weapon did matter—missile launchers lock on targets, grenade launchers do massive amounts of damage, blasters carry a lot of ammo—but what made them cool was mostly that they looked like authentic guns from the 1980s cartoon.

Wheeljack, the Autobots’ gadget and repair guy, can also develop tech upgrades for everyone. You spend credits gathered during missions, also from arms caches and from kills, to unlock a session of a mini-game that involves reflexes and timing to get the best results from the attempt to design an upgrade.

Upgrades like bonus health and bonus attack values were obviously useful, but what made the tech upgrade system cool was that Wheeljack was making the gear, muttering about the quality of his work and celebrating when he designed a high-quality upgrade.

And of course, all of this upgrading and crafting was cool because it took place against the orange walls and flashing lights of the Ark. But then again, I know what the Ark is. Transformers: Devastation is not going for the usual $60 a new game costs during its release week. Devastation will only set you back $50, and that’s a tacit admission by Activision that Devastation isn’t worthy of the higher price tag. It could also be recognition that the strength of the license and appeal primarily to a very specific demographic.

So ask yourself whether you fit into that demographic, and let that decide when and if Transformers: Devastation is worth your time. If you’re a Transformers fan who grew up with the original 1980s universe, Devastation is gold. Everyone else should take this game under advisement.

Disclosure: Our Xbox One review copy of Transformers: Devastation was provided courtesy of Activision.