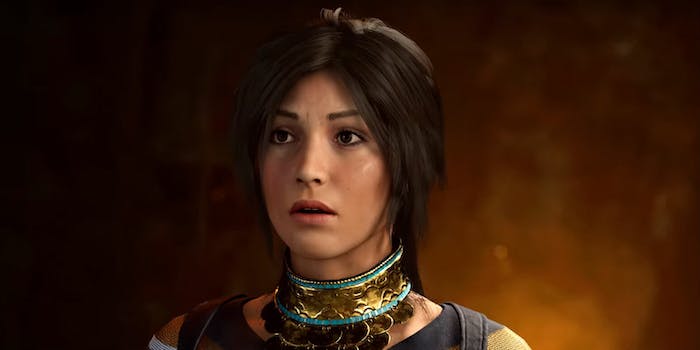 Shadow of the Tomb Raider/YouTube

Tomb Raider blasted by developers for using gibberish instead of Arabic

A poor translation effort only highlights some of the Tomb Raider franchise's cultural shortcomings.

Tomb Raider is a long-running video game franchise about, well, raiding the tombs and ruins of ancient or secret societies, all through the increasingly hardened eyes of Lara Croft. In the 2013 reboot, a young and naive Lara must save her friends from human and mystical threats on the island of Yamatai. In the 2015 sequel Rise of the Tomb Raider, a more experienced Lara combs through an ancient Siberian city, driven to stop a paramilitary organization bent on immortality. In the most recent game, Shadow of the Tomb Raider, Lara accidentally sparks a Mayan apocalypse after nabbing a ceremonial dagger.

What this might illustrate to some readers is that Tomb Raider games, while solid in their own right, are not without their cultural insensitivity, white savior trope and all. Unfortunately, this was illustrated on social media when an ad for Shadow of the Tomb Raider on the Arabic version of Facebook seemingly used Arabic text that translated to absolute gibberish.

The ad was discovered by game designer Osama Dorgam, who took a screen capture, writing “#ThatIsNotArabic.”

The discrepancy was then amplified by Rami Ismail, the noted indie developer and industry advocate, who wrote “Oh hey, look, another multi-million dollar company that can’t write a single four-letter word in Arabic, and they sure didn’t care enough about Arabs to have even just one of us check & validate a message for 0.5 billion people.”

Oh hey, look, another multi-million dollar company that can't write a single four-letter word in Arabic, and they sure didn't care enough about Arabs to have even just one of us check & validate a message for 0.5 billion people. https://t.co/65DPX7v8YF

According to Ismail, who is Arabic, the text above the Tomb Raider logo translates to “Em Oce B.”

Both the 2013 Tomb Raider and Rise of the Tomb Raider featured Arabic localization, with full Arabic voice acting, something that Ismail said he hopes to continue supporting, understanding how errors like the ad can happen.

What’s most likely is that publisher Square Enix or developer Crystal Dynamics outsourced the ad localization to a different company (or perhaps their marketing department) than the one that localizes the game itself. Arabic has historically presented issues for generic translation programs, as the right-to-left nature of the text can often throw programs like Photoshop out of whack. It still comes across as negligent to not have at least one Arabic-speaking individual perform some quality assurance for a product that will sell hundreds of thousands of copies across the globe.

A spokesperson for the game did not immediately respond to a request for comment.

You can read our full review of Shadow of the Tomb Raider, which Daily Dot’s AJ Moser called “a fitting cap to the Lara Croft trilogy.”

Update 9:30am CT, Sept. 19: Square Enix has issued a statement to Daily Dot following this report. It has removed the ad: “It has come to our attention that as a result of a localization error, some Shadow of the Tomb Raider advertisements appeared with incorrect Arabic characters. The advertising has been removed, and we sincerely apologize for any confusion this has caused.”