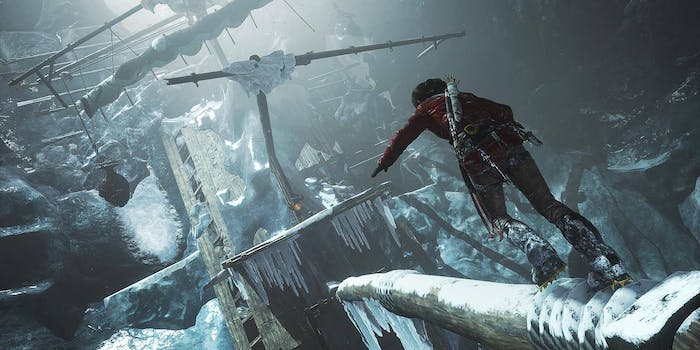 Rise of the Tomb Raider portrays Lara Croft as a more experienced, more confident archeologist in the second game of her rebooted franchise. Yet, the sense of growth implied by the game’s title applies more to the series itself than its heroine.

While I can only guess what challenges Crystal Dynamics faced and the pressures the developers put on themselves, there are elements in this sequel that make it feel like the studio had less to prove this time around. The end result is an adventure as thrilling as it is refined.

The last Tomb Raider excelled in immediacy, with the disaster that strikes Lara and her archeology team at the beginning of the game. Given the slew of precarious situations coming at Lara and her friends on the mysterious island of Yamatai, it was a minor miracle that Crystal Dynamics managed to weave in backstories, flashbacks, and introspection, all of which helped you empathize with Lara. 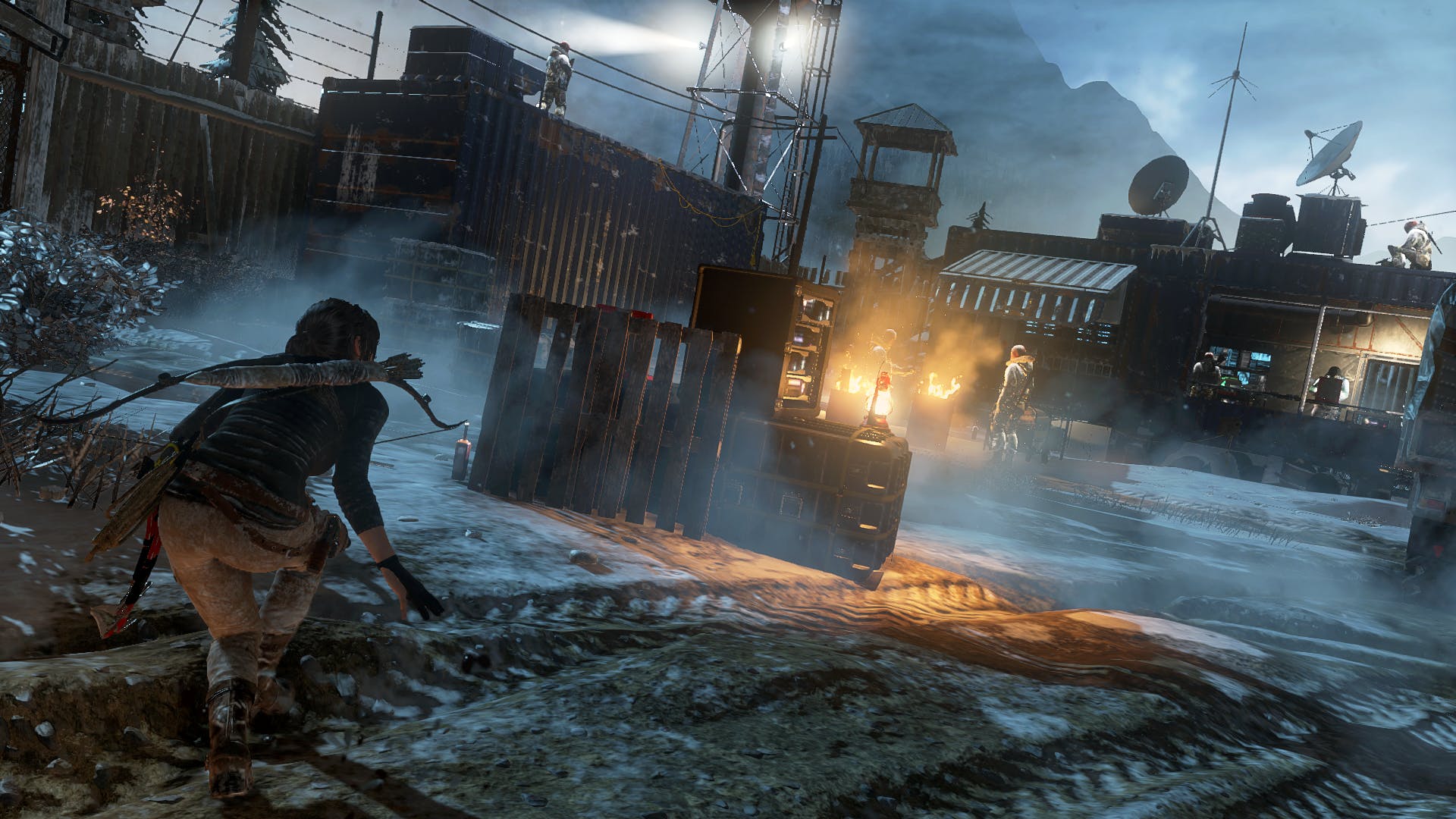 In Rise of the Tomb Raider lore-building is even better, more tightly woven, and often presented succinctly. Lara’s motivations and inspirations by her archeologist father were only hinted at in the last game. In Rise of the Tomb Raider, there’s much more familial exposition. The initial flashbacks of Lara’s childhood are vague vignettes that don’t explain much at first. Forward progress through the game answers many (but not all) of the plot questions.

Lara’s latest quest is both a literal and figurative one, as she follows in her father’s footsteps to find an artifact tied to immortality. Given that the quest for this item resulted in a scandal that irrevocably damaged her father’s reputation, Lara’s intense drive to validate her father poses its own risks, like irrational actions and clouded thinking. It’s reminiscent of the “How much is enough?” theme of Uncharted 3: Drake’s Deception although I’m happy to report that Rise of the Tomb Raider does a much better job in crafting and executing this theme.

The pace of the unfolding story rapidly accelerates as you progress, indicative of the thoughtful design of Rise of the Tomb Raider as a whole. Collectibles aren’t just a means to unlock an achievement. Finding a single item can increase Lara’s experience and language translation skills, and can provide insight on the inhabitants and prior visitors of the game’s locales. This is rare instance where a game compelled me to obtain 100 percent of the collectibles before completing the story. And even if you exhaust all areas of valuable items in your first playthrough, there’s immense replay value to be found in the Expeditions mode. This section allows you to asynchronously compete with friends in replaying previously visited areas in the game, further enhanced by collectible gameplay modification cards. 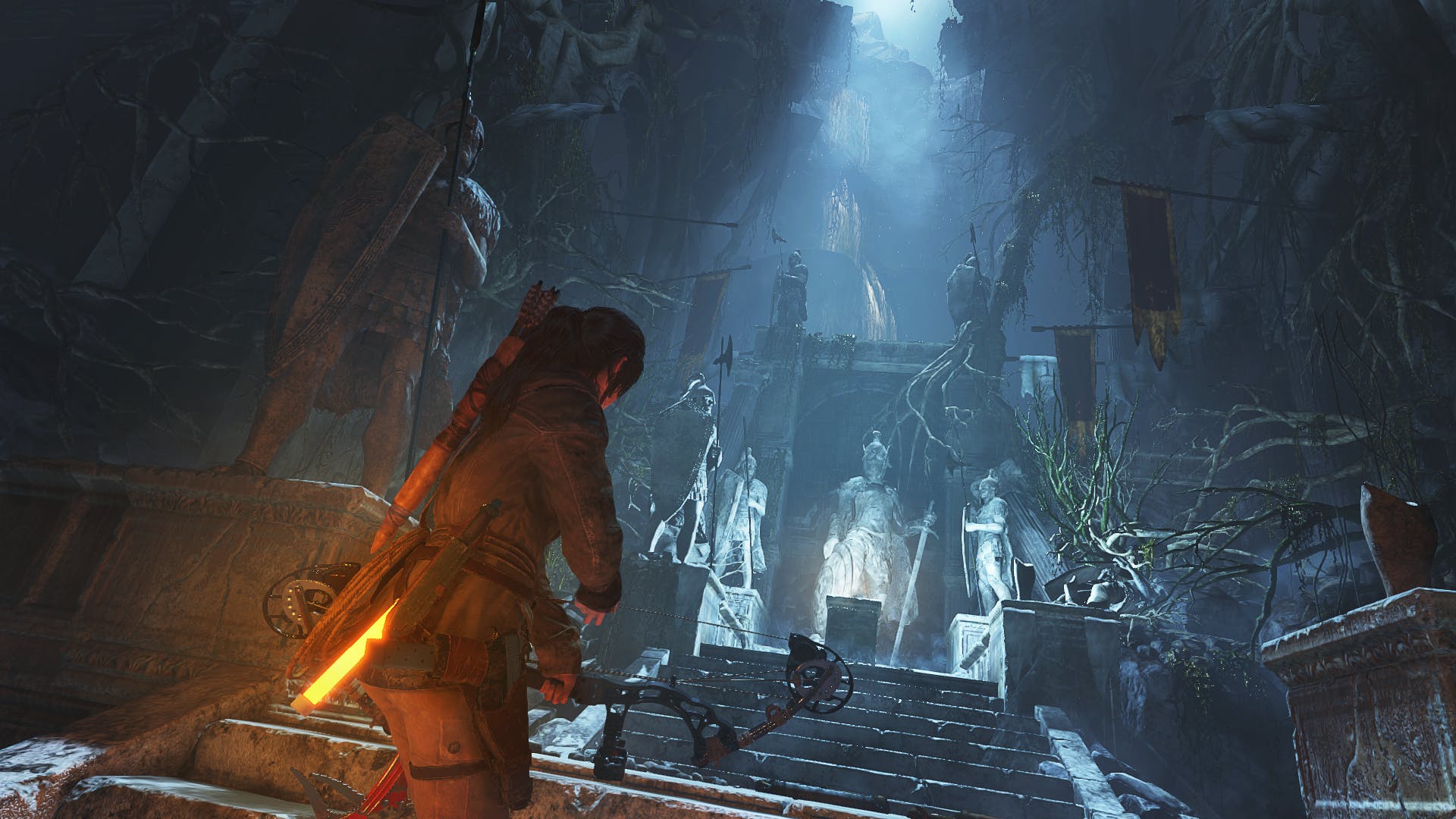 With all the scattered relics, the environments are proverbial tombs themselves, even if they don’t feature the classic tomb puzzles. Learning about the game world beyond Lara’s own backstory has a snowball effect. The further I went in the game, the more attention I paid to conversations of friends and foes. Even the main villains’ motivations earn a couple sympathy points when you find specific audio recordings of their personal plights. There’s immense thoughtfulness in the other characters’ conversation topics even if they aren’t relevant to Lara, like two guards who have an in-depth discussion about a promotion. It’s impressive how much realism it adds to a game when NPCs speak like they don’t know the protagonist is nearby.

In the context of rebooting the series, 2013’s Tomb Raider excelled in being full of watercooler-worthy moments every 15 minutes, whether it was the dramatic cave escape in the beginning to an explosive crash of the rescue plane. With Rise of the Tomb Raider, Crystal Dynamics doesn’t feel compelled to bombard you with such moments so frequently, even if it should take you about the same amount of time to clear it.

What results is a game richer in nuance and more considerate in its pacing. There are features that are fundamentally different from the last game, such as the greater presence of ally AI and their role in the story. It’s rare to play a sequel to any game that doesn’t feel like it has to introduce new elements just for the sake of it.

This is best exemplified in the similarities the environments have to the last game. There are no jungles or excavations in urban areas (eg. the National Treasure movies). Once again, there are a lot of forests and a lot of snow—and why shouldn’t those kinds of settings be reused? They’re sublime in their illusion of grand size, fooling you into thinking you might actually get lost in the wilderness. Even if there are very distinct areas like a Soviet base (an echo of the Nazi base in the previous Tomb Raider) and an ancient temple, it avoids the “Tomb Raider theme park” segmentation design of the last game. My favorite aspect of the level design are the moments when the unlocking of doors reveal a shortcut to an area Lara already visited hours ago. You can’t help but wonder if a Dark Souls influence is at play here.

What is especially remarkable about the action scenes is how well they illustrate a side to Lara’s character that you don’t necessarily see in the cutscenes and conversations. A gasp from a death-defying leap or the shock from falling through a weak platform do a lot to convey that Lara Croft isn’t superhuman. There’s vulnerability, from her seemingly constant shivering to her wincing from the spills she takes. She’s doesn’t always kill with efficiency. Attacking an enemy from above doesn’t result in an instant kill. There’s beauty in her graceless melee techniques, not unlike the fights James Bond got into in Casino Royale.

In the latter half of the game, she hardens from grit, frustrations, and impatience from dealing with all of the foes she’s run into up to this point. This is similar to her transformation into the confident ass-kicker near the end of the last game. The fact that she had to build up to this level of assuredness once again might mean that this version of Lara Croft might never transform into the cocksure, sometimes boastful version from the original Tomb Raider series. That’s fine by me, especially when the isometric side series (Guardian of Light and Temple of Orisis) already has an interpretation of Lara that is much more faithful to her original version. 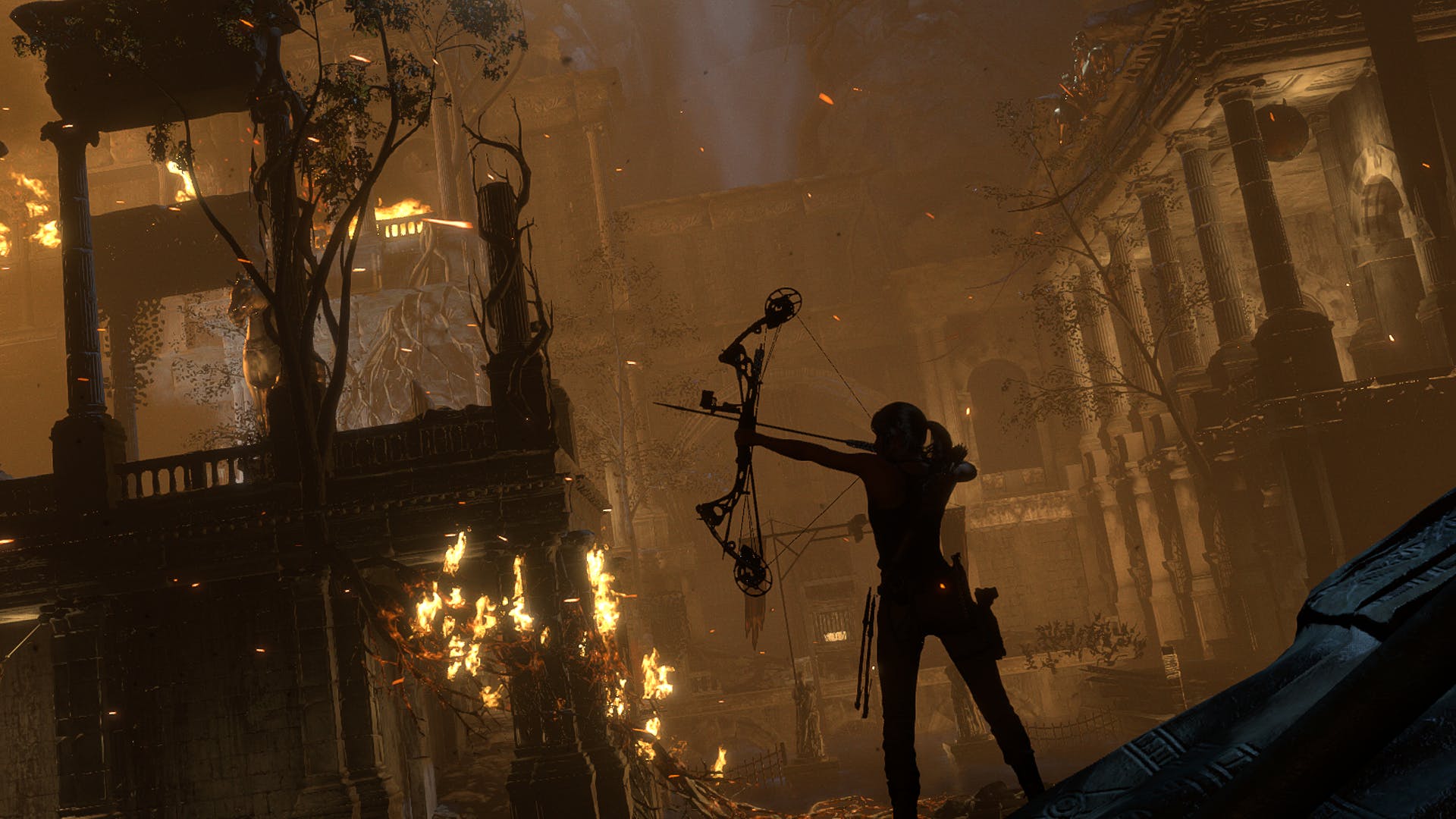 Even if Lara doesn’t always feel like a badass, Rise of the Tomb Raider gives you every opportunity to feel like one yourself. The purest form of playthrough success in a challenging adventure game is to conquer a new puzzle or combat area on your first attempt, and this game offers its share of such opportunities.

That’s not to say Rise of the Tomb Raider is easy. Yes, many of the earlier enemies are some of the most immobile, unobservant soldiers imaginable. They frankly feel deserving of Lara’s fatal chokehold. Even if you play at the Seasoned Raider level (Hard) on your first playthrough, you could make the argument that many moments and opportunities are conquerable with ease. Remember how getting the silenced sniper rifle early in Metal Gear Solid 2 and Metal Gear Solid 3 made many parts of those games a cakewalk? You’ll get similar results once you poison-enhance your arrows in Rise of the Tomb Raider. It’s baffling how early you get this upgrade. The cloud of poison has the lethal effect of a grenade-enhanced arrow (which you get much later) but without the noise to alert other enemies. With patience and keen use of the environment, you can easily avoid a 10-man firefight. The latter tactic echoes the resource-intensive infiltration methods of The Last of Us. After you craft your first can into a stun weapon, you can’t help but think that this Tomb Raider sequel drew inspiration from Naughty Dog’s 2013 classic.

Successfully sneaking through areas on your first try is unquestionably exhilarating. Equally thrilling are moments when the opposition tries to overwhelm Lara in high numbers, whether it’s a scripted ambush or if Lara accidentally gives herself away, triggering an alert state. You’ve probably heard the idiom “Hope for the best, expect the worst.” Well, in Rise of the Tomb Raider it’s “Hope for stealthy kills, expect all out combat.”

The progression system, with the help of semi-thorough environmental searching, ensures that Lara has tools and weapons for both situations. It’s a rush making quick judgments, like sacrificing the added punch of a headshot from a rifle in favor of the unmatched efficiency of a shotgun. When you add the live-or-die tension of healing while on the move, you end up with some very intoxicating moments. If any aspect of the combat and game design qualifies as a shortcoming, it would be the shortage of forced combat similar to the superb shanty town firefight in the last game. That area was one of the few parts of the series where you were forced to think tactically, rather than treat tactical combat as optional. 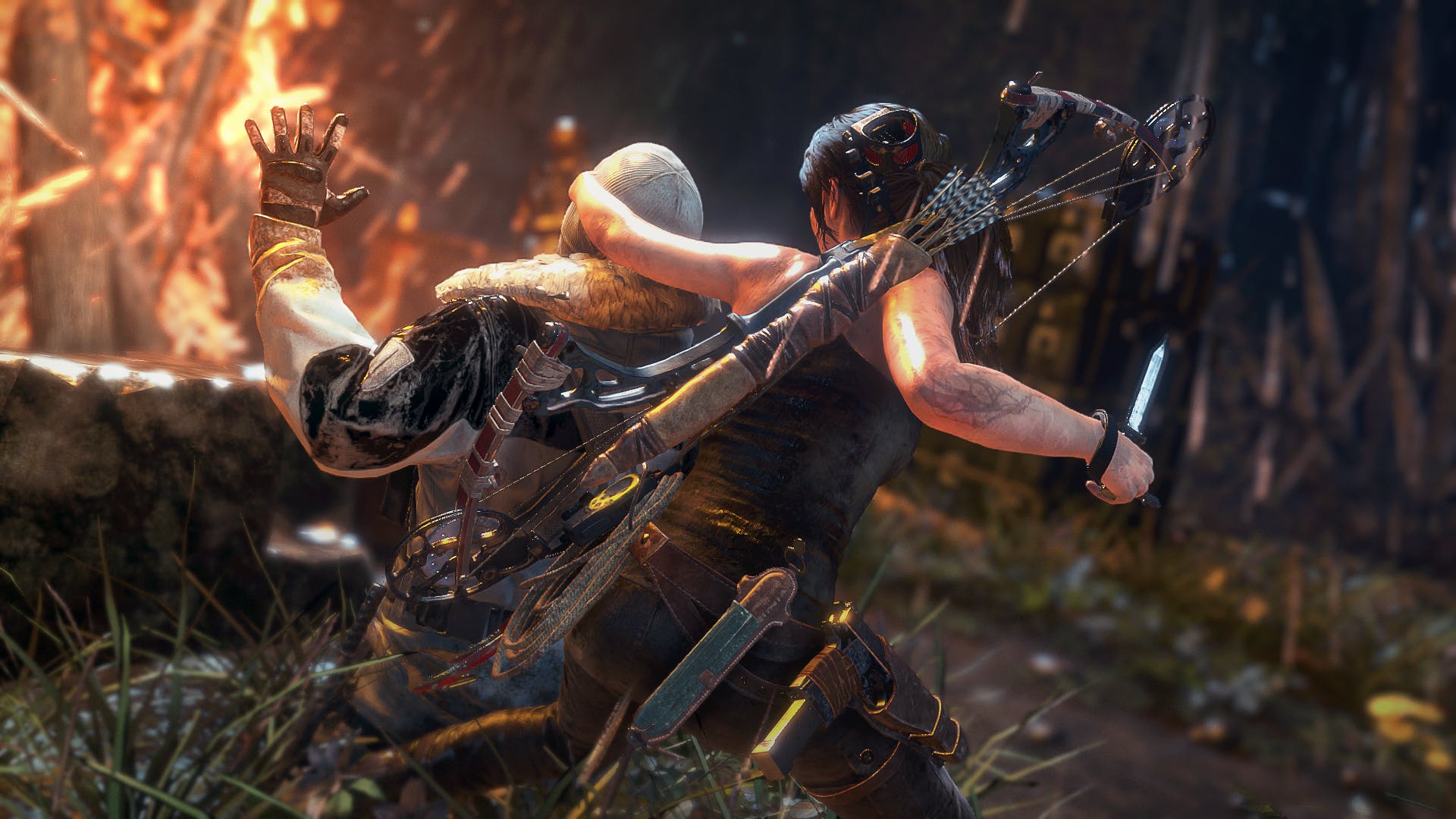 As with every Tomb Raider game, the exploration of tombs work as a brain-teasing reprieve from all the combat. The classic puzzle-style tombs aren’t abundant, but they all yield some degree of problem-solving gratification. From the use of weights and pulleys to funnelling explosive barrels to create new platforming opportunities, you’ll have your share of satisfying “a-ha” moments that make you feel you beat the tomb designers at Crystal Dynamics.

Some of the best sequels are those that magically render the previous installments irrelevant (for example, Burnout 3: Takedown, Call of Duty 4: Modern Warfare, Uncharted 2: Among Thieves). Rise of the Tomb Raider isn’t that kind of sequel, thanks in large part to the high bar set by its 2013 predecessor. If not for the human need for sleep, I would recommend newcomers to play both games in a single sitting. That’s how complementary these games are to each other. But where the previous game is an over-the-top whirlwind, Rise of the Tomb Raider is better as a savored experience.

Disclosure: Our review copy of Rise of the Tomb Raider on Xbox One was provided courtesy of Microsoft.