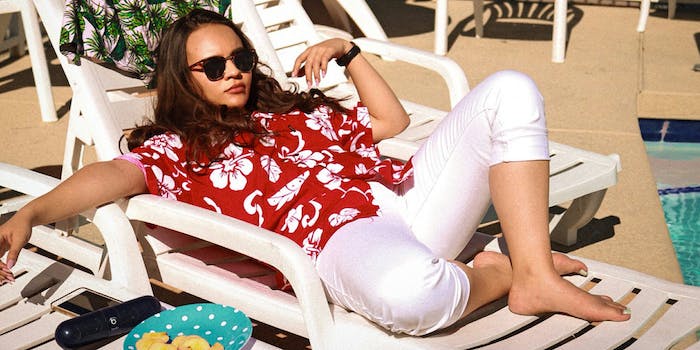 This isn't just any fan art.

Recreating celebrity photoshoots is a fan tradition as old as time, but one fan took it to another level by bringing a Tom Holland photoshoot to life, Mashable reported Tuesday.

Holland posed for GQ ahead of the release of Spider-Man: Homecoming last year. The shoot featured him lounging at the pool, practicing a ballet pose, and eating Chinese food, among other “casual” shots. Although the photoshoot isn’t new, the photos went around again after GQ posted one of them to Instagram and a photoset on Twitter went viral.

tom holland for gq. now this was a photoshoot pic.twitter.com/I61YvCJp7Q

Over the weekend, dedicated fan Tori Bernal took things into her own hands. She shared her own photoshoot that recreated four of Holland’s photos, and not only does she nail the expression and poses, she managed to use near-perfect versions of the outfits he wears in the shoot as well as the backgrounds.

Bernal, who says she’s a photographer, already had most of the outfits needed for the shoot, so much of her focus was finding the right places to take the photos.

My version of fan art, I recreated @TomHolland1996 ‘s GQ photoshoot. Please retweet and tag him so he can see them ♥️😄 pic.twitter.com/aep6uWdqVI

And it’s already paid off. In just a few days, not only has Holland seen the photos, she brought them straight to him during a photo op at Comicpalooza in Houston.