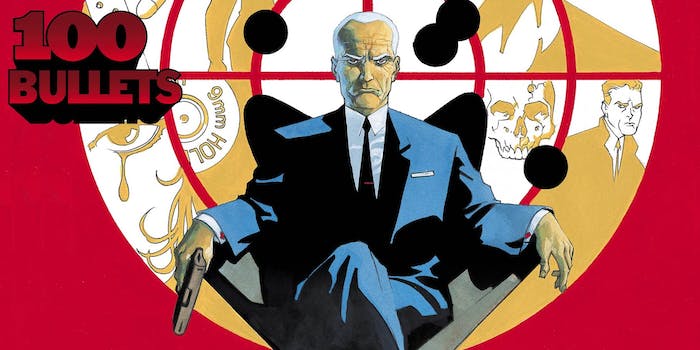 The 'Mad Max Fury Road' star is reportedly interested in the lead role as well.

Tom Hardy, who portrayed Bane in The Dark Night Rises, is already attached to another DC Comics adaptation, this time by way of DC’s more adult-rated Vertigo imprint.

THR reports that New Line is developing Vertigo comic 100 Bullets for the big screen, with Hardy signed on as producer. The actor dropped out of Suicide Squad earlier this year, but subsequently mentioned working on a DC movie that he described as “prime real estate.” It looks like 100 Bullets is that movie.

Written by Brian Azzarello and illustrated by Eduardo Risso, the acclaimed comic series won Harvey and Eisner awards during its 100-issue run from 1999 to 2009. This gives an adaptation plenty to work with, and while a screenplay has already been written, there’s no word on what storyline the film might be using.

100 Bullets begins as a noir-influenced action/crime drama about vigilantism and revenge, starring a mysterious man named Agent Graves. Graves approaches people with the offer of a gun and 100 untraceable bullets, giving them free rein to wreak vengeance on someone who has done them wrong. However, this story gradually expands into something far more complex—which in Hollywood terms translates into ample opportunity for sequels.

According to THR, Hardy has “an eye” on the lead role, although no actors have officially been cast. A lot will depend on how busy his schedule looks over the next couple of years.