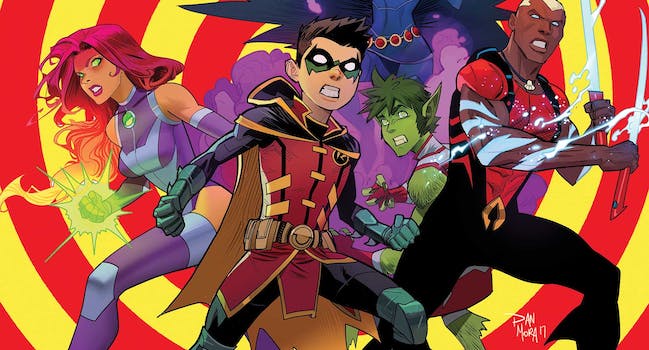 DC‘s live-action Titans show is currently in production, adapting beloved characters from the Teen Titans animated series. We’ve already seen an official photo of Brenton Thwaites as Dick Grayson, but this week some new photos leaked from the set. They show Beast Boy, Raven and Starfire in costume, and fans were not impressed.

The overall response was somewhere between derision and dismay, complaining that the costumes looked cheap and the wigs were unconvincing. Most of the comments were either critical of the characters’ transformation from cartoon to live-action, or downright cruel about the actors’ appearances. Especially the women, because of course.

[BREAKING] The first leaked photo of Koriand’r aka Starfire (Anna Diop) in her costume on the set of #Titans ! pic.twitter.com/HRwf3KFOjH

However, there’s usually quite a divide between behind-the-scenes paparazzi shots and the actual show. We’ve seen similarly messy set photos from big-budget movies, and at the moment, there’s no reason to assume that Titans will look worse than Arrow or Supergirl. As a rule, costumes do look different on camera. And if you look up the designer behind Titans‘ costumes, you’ll see that she’s worked on numerous movies including Iron Man and Scott Pilgrim, and just designed the superhero suits for Black Lightning.

Starfire actress Anna Diop was not impressed by the backlash, responding with a long text post on Instagram. “Yesterday a photo of me on set leaked online,” she wrote. “It was unfortunate because fans have been waiting MONTHS for a photo of ‘Starfire’ and a sloppy photo of me on a curb in 15 degree weather is what they got instead. For the sake of our incredible fans – I hated that this is the first picture people are seeing. It’s out of context and it’s a misrepresentation of the incredible character I get to play.”

Diop also spoke out against fans who were “racist, derogatory, and/or cruel” in their comments about the Titans cast. “The hate speech that followed was deplorable,” she said.  “And though I am highly unbothered I do want to use this as an opportunity to say that tearing people down is not something that I tolerate.”

The complaints about Beast Boy (Ryan Potter) generally focused on his lack of green skin and pointy ears, while Starfire and Raven attracted more personal comments aimed at the actresses themselves. It seems that Diop received racist backlash for playing Starfire (who is light-skinned in the comics and cartoon), while 14-year-old Teagan Croft (Raven) now has to contend with complaints about her appearance in her first major TV role. Forget the costumes; this is a bad look all round for Teen Titans fans.