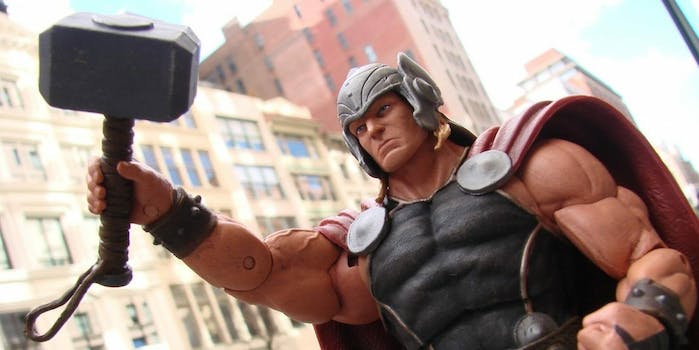 ‘Thor’ fan builds Mjolnir replica that only he can lift

We're surprised it took someone this long to do this.

As Tony Stark was frustrated to learn in the latest Avengers movie, only the worthy can lift Thor‘s hammer. However, Stark did provide us with an interesting theory: maybe Mjolnir is just programmed to respond to Thor’s fingerprints.

YouTube user Sufficiently Advanced (as in the Arthur C. Clarke quote, “Any sufficiently advanced technology is indistinguishable from magic”) was inspired to give Stark’s theory a try by building a fingerprint-activated Mjolnir replica.

Using electromagnets that can only be turned off with his own thumbprint, he built a powerful Mjolnir toy that only he could lift. If anyone else tried, it just stuck to the metal surface where he left it.

Of course, that didn’t stop crowds of people along Venice Beach from trying to prove their worthiness by lifting the hammer. Who can resist a challenge like that?