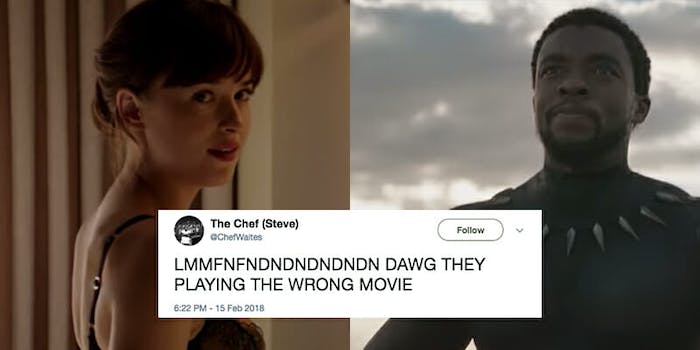 Moviegoers showed up to Atlantic Station theater in Atlanta expecting to see Black Panther, the record-breaking Marvel film about black superheroes set in the fictional Wakanda.

Instead, they got Fifty Shades Freed.

In a hilarious mishap, the theater apparently accidentally began playing the sexy film (and critical slump) about a married couple instead of Black Panther at a Thursday screening. Twitter user @ChefWaites live-tweeted from the audience.

He later posted videos of the mistake. One audience member can be heard yelling in the background, “It’s the opposite movie!”

Aiight so this happened at Atlantic Station. They played 50 shades instead of black panther pic.twitter.com/5WhvX270Y5

Luckily, the theater seems to have quickly corrected the snafu for the fans who came to see T’Challa—and definitely not Anastasia Steele.

“I never laughed so hard. I’m happy i came to the black theatre,” @ChefWaites tweeted.

I never laughed so hard. I’m happy i came to the black theatre pic.twitter.com/pxdTFK4Qt3