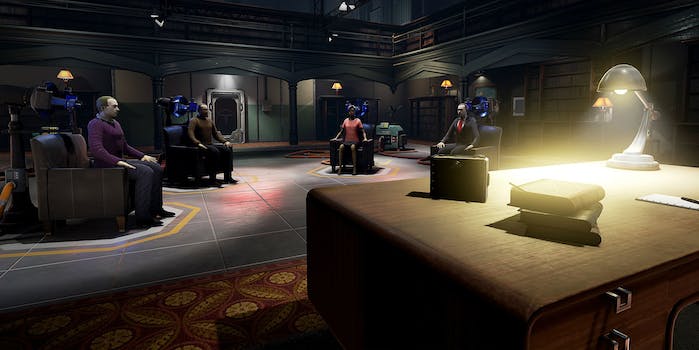 The Assembly falls short as an engaging adventure and VR experience

This virtual reality game doesn’t feel like it needs VR.

As I gave the adorable beagle an overdose of sedative, all I wanted was to hold him and say everything would be OK, but the game wouldn’t let me open his cage.

The Assembly, a first-person-perspective, point-and-click adventure game can be played as a sit-down virtual reality experience on either the Oculus Rift or HTC Vive. The Assembly was promoted as having been developed specifically for VR, but it had failed to provide a unique VR experience up until my encounter with the dog.

The beagle’s was caged in a virology lab that was part of a research facility built deep underneath a mountain. The facility was run by a cabal of scientists called the Assembly who were well-funded, and who operated outside the boundaries of regulation.

I had discovered that the beagle, as part of an experiment, had been infected with a powerful virus that would lead to a painful death. The mechanism that dumped food into his bowl was located outside of his cage, so I could spike his food with a large dose of sedative to put him to sleep, and spare him that awful fate.

The beagle had been sitting upright, panting and happy before eating the spiked food. He remained on his feet after eating the food but slouched as if drowsy. He started to whine as if made uncomfortable by the effects of the sedative. I stood in front of the cage apologizing out loud for what I’d done, but knowing it was still the right thing to do.

I stood there for several minutes waiting for the dog to lay down and go to sleep, but nothing happened. He remained in that slouched position. His whine followed me as I walked into the small rooms adjoining the lab, feeling worse with every high-pitched cry. Finally I walked back over to the cage and stood in front of it again, begging aloud for him to just go to sleep.

Had The Assembly been a traditional game played on a traditional platform I don’t think the encounter would have bothered me quite so much. But because I was in VR, projected inside the game world versus seeing it on a television or a monitor, the adorable dog was right in front of me. I wanted to rip open the cage and hold the poor guy.

I began to get angry that The Assembly’s developers hadn’t bothered with just one more animation of the dog laying down and sleeping, so I could have closure. This is the rich potential for narrative games in virtual reality, tapping into the sense of immediacy that VR promotes to give dramatic moments more punch.

If only The Assembly had given me an experience anything like my encounter with the beagle where human characters were concerned. 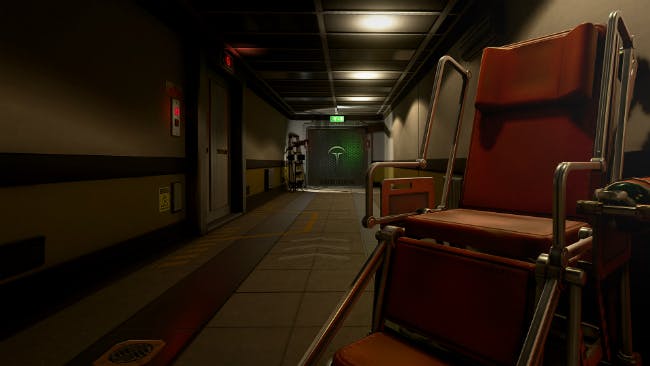 You play as two characters in the game. Caleb Pearson is a virologist who discovers that a dangerous experiment is being conducted outside the facility. The risk of outbreak is too high for Pearson to ignore, so he spends his half of the story trying to gather evidence to prove what this other scientist is up to and works to shut down the experiment down.

Madeleine Stone is an English scientist who used an experimental treatment on her dying mother, with her mother’s consent, because there were no other treatment alternatives available. Her mother died, and Stone’s use of an experimental treatment was uncovered. Her willingness to step past medical ethics in the pursuit of knowledge has made her an attractive candidate for The Assembly, and she spends her half of the game mostly on a series of simple puzzles by way of interviewing for the job.

The closest you get to character examination with Pearson is learning cursory details about his failed relationship with another Assembly scientist. Other than discovering the details about her experiments on her mother, and some exploration of her guilt, we don’t learn much about Stone, either. The game is all plot, and it’s not a terribly interesting plot at that.

You also don’t learn very much about The Assembly. You’re given no idea as to the origins and ultimate goals of the organization. Are they saviors conducting research and achieving technological breakthroughs to help humankind? Pure researchers conducting experiments only for the sake of attaining knowledge? Or are they the Bond-villain-type complete with their headquarters in an underground lair?

Keeping The Assembly a mysterious group might not have felt boring if secret scientific cabals hadn’t already been done to death in science-fiction. As it was, I just wanted to know who these people were, and why I should care about them.

The puzzles that Stone has to pass are simple. Pearson’s half of The Assembly is the typical adventure-game formula of finding clues to bypass barriers and progress. Pearson spends a lot of time reading email. He opens a ton of empty drawers looking for a single key or a scientific report contained in a manilla folder.

There are a handful of what are meant to be moral decisions in The Assembly, like the encounter with the beagle, but without understanding the context of those decisions or having any genuine relationships with the characters, these moral choices fail to have any weight.

Nothing overtly marks The Assembly as an episodic story, even though the end of the game is left wide open for a sequel. Maybe if and when developer nDreams releases another chapter, The Assembly will gain the characters and story it needs to be a successful adventure game. 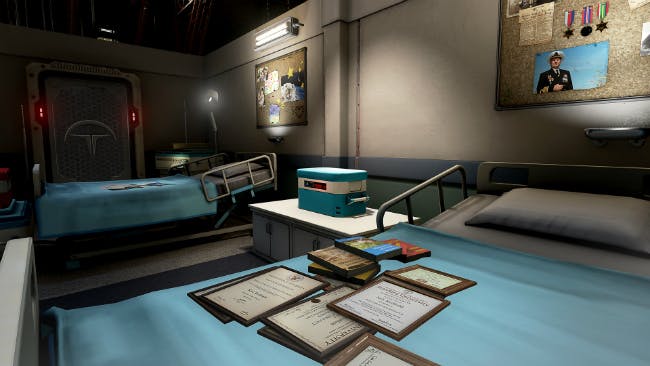 In my mind, then, lacking sympathetic characters or an interesting story, the value of The Assembly is as an experiment in whether or not virtual reality adds anything to the adventure game genre.

Other than my experience with the dog, nothing in The Assembly felt like it would have been better for having been presented in VR. And considering that The Assembly also has a non-VR version, it’s questionable whether it’s even appropriate to call the game “build from the ground up for VR.”

The traditional “blink” system for movement in first-person VR games, where you indicate the position  you want to move to usually via a cursor, is done well in The Assembly. You don’t just see a circle on the ground that indicates where you want to go, you also see a silhouette of the position that your character will be standing in once you make the move.

If you’re trying to use a computer or search an area, you can make sure the silhouette is reaching for the screen or bent over the object you want to search, before you commit to the change in position.

You can also use the two control sticks or the mouse and keyboard to adjust your position, but only by turning in 45 or 180 degree angles, or taking steps directly forward, backward, or side-to-side. Lacking any kind of smooth, free-movement system, it was often difficult to get the camera squared up to the object I was interacting with.

You move the cursor in The Assembly by moving your head, so when you’re not squared up with a searchable object it can be difficult to select a thing to interact with without bending your neck into uncomfortable positions.

I have a lot of patience for VR control schemes with wonky elements. Developers are still figuring out how best to create games for VR. But there has to be a valuable experience to balance out the frustration those control schemes can create, and other than a single moment of empathy for a suffering animal that I don’t think would have been possible without VR, The Assembly failed to deliver that experience.

Disclosure: Our Steam copy of The Assembly was provided via nDreams.