My friends might’ve thought I was a bit crazy when I showed them the eight-pack of Kleenex tissues* I purchased in preparation to see The Fault in Our Stars. (In my defense, that’s how Duane Reade sold them.)

The movie, based on the bestselling novel by John Green, is finally out in the U.S. today. It’s the story of Hazel Grace Lancaster and Augustus Waters, two cancer patients who allow themselves to wade the waters of first love despite fate being against them, but it’s not a story about cancer. It’s a love story that manages to sweep you up and punch you in the gut with the turn of a page.

But most of the people who were at Night Before Our Stars—a special fan screening and a livestreamed Q&A session with Green, director Josh Boone, producer Wyck Godfrey, and stars Shailene Woodley, Ansel Elgort, and Nat Wolff held in 650 theaters across the country—already knew that.

The crying, as many critics have mentioned in reviews, is almost inevitable; DFTBA Records sold a “TFiOS Preparedness Kit” that included a tissue pack, and some early screenings reportedly had branded tissues. Vulture even published a guide on how not to cry during the movie, although who knows how successful it’ll actually be in practice.

I’ve always considered myself an avid reader, but TFIOS held a special place for me. As someone who got one of the first-run signed copies, I made my then-boyfriend promise not to laugh at my puffy eyes after bawling from it, and it helped me process my feelings last year after a loved one was diagnosed with cancer.

It’s a book that’s resonated with many of Green’s fans, both the people who just read his books and the more than 2 million subscribers to the Vlogbrothers channel run by him and his brother, Hank. TFIOS has been on the New York Times Young Adult bestsellers’ list for 78 straight weeks now.

Even Green doesn’t really know how it got so big.

“I don’t know why people liked The Fault in Our Stars, but they do, and they seem to like it enough to recommend it to their friends and family,” Green wrote on Tumblr in May 2013.

“I know so many people who’ve read this book and said they loved it,” Matea Friedel told me. “My sister read this book a couple years ago when it first came out because she follows the author on YouTube, and she told me she loved it, so I’ve been meaning to read it forever, and just now started reading it.”

Friedel had a copy of the book with her, determined to finish the final pages before the movie started. She mentioned that TFIOS was “sweeping the nation.”

The Manhattan theater I attended was populated mostly teenage girls, but they weren’t the only ones in attendance; some families were there, as were a number of male viewers. As a treat, fans got a special poster signed by Green, Woodley, Elgort, and Wolff and a commemorative charm bracelet. 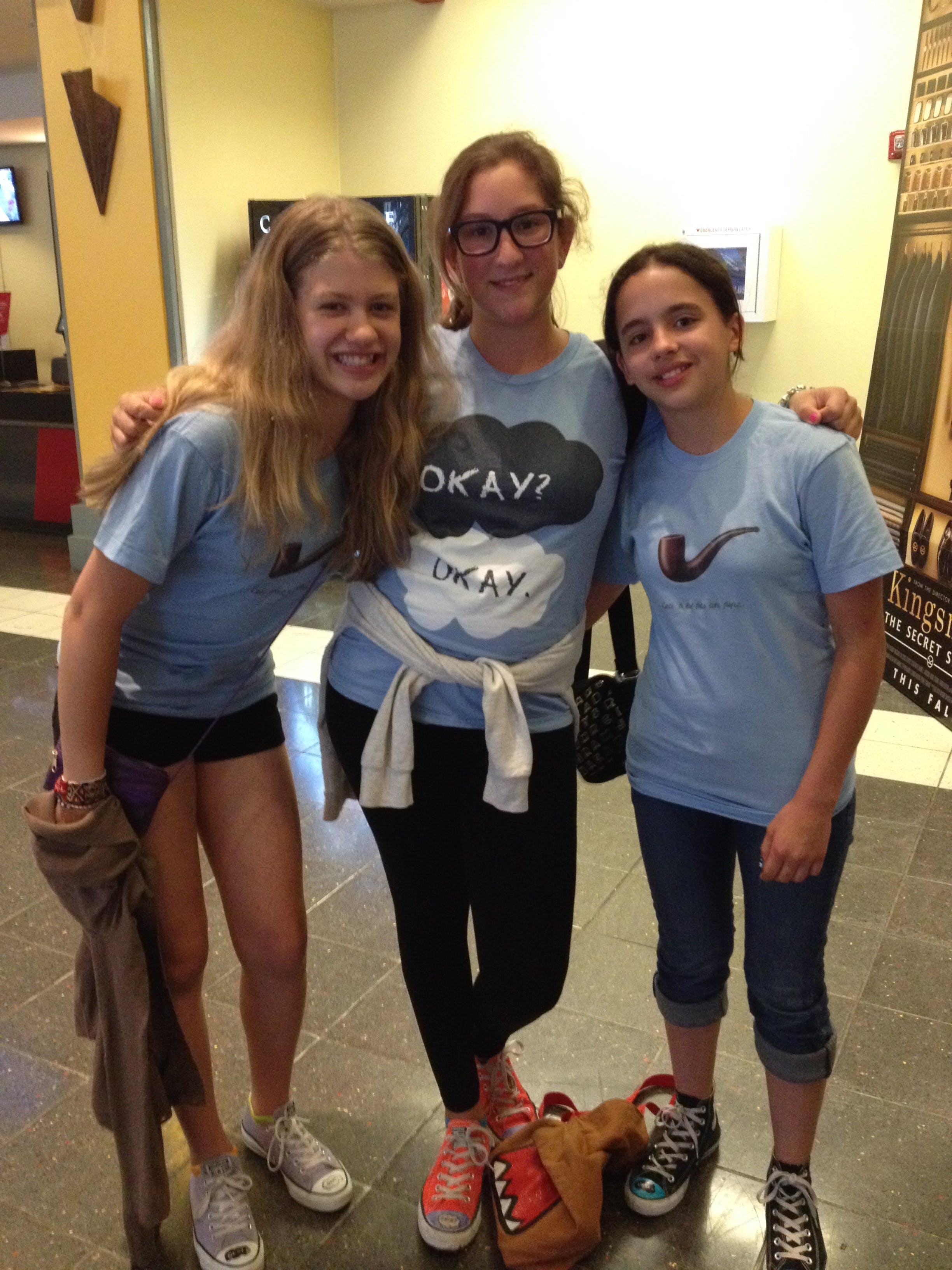 But goodies and T-shirts notwithstanding, when I spoke to some of the readers waiting in line, they were mostly hoping that the movie would be true to the books.

“I hope it embodies the book as much as possible,” Julia Baez, who said she read the book five times before the screening, told me. She discovered Green through the Vlogbrothers and counted TFIOS and Looking For Alaska among her favorite books of his.

People started settling in the theater, where some of them even mentioned Esther Earl, the girl who inspired TFIOS (but isn’t the basis for Hazel). She passed away from thyroid cancer in 2010, and every year since then the Green brothers (and the Nerdfighter community) have celebrated her and platonic love. It’s even something the Harry Potter Alliance is latching onto for TFIOS’s release.

Two hours and many tissues and sniffles later, that sense of community was still strong with the audience—and it was palpable with the cast and crew on-hand for the Q&A session afterwards in Atlanta, even after months of promotion that drew thousands to malls in four separate states. 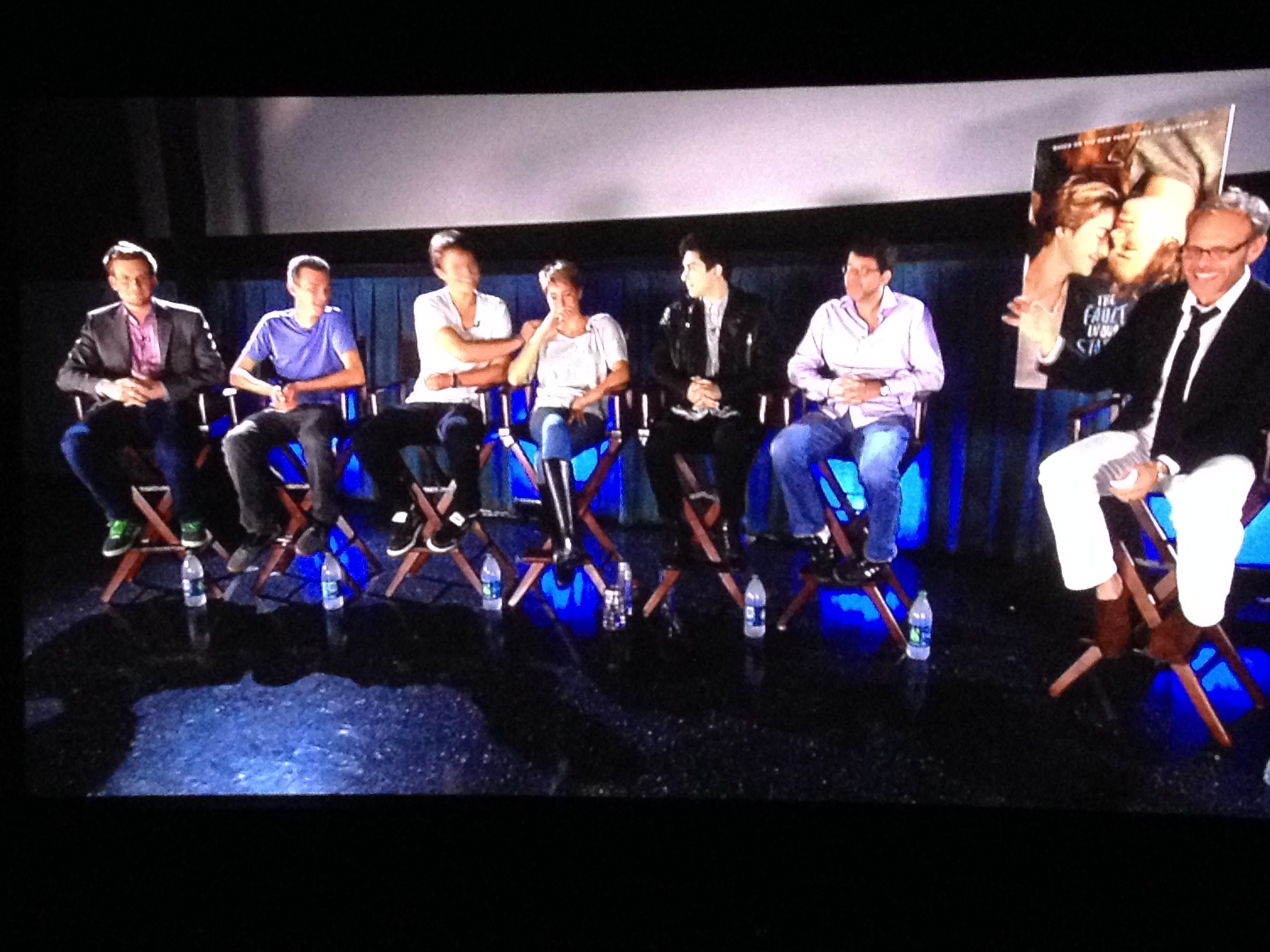 Green, who’s been doing press for TFIOS almost as much as the cast has, said he does it because he loves the film, not because he’s getting paid for it. And if he didn’t like it, he would’ve said something about it.

Host Alton Brown took questions from the Atlanta audience and Twitter using the hashtag #AskTFIOS, which included everything from their wishes to honor the original work, funny set stories, the amount of crying everyone did on the set, and the level of respect everyone has for each other.

They also showed Green’s cameo to cheers from the crowd, which was cut from the film due to timing, something he was happy about since he was dissatisfied with his performance.

Just hanging put on the #tfiosmovie set with the lovely Sophie. pic.twitter.com/DaFLFXeWOk

After I left the theater, I took the 6 train uptown, where someone noticed the poster in my hands. It was a woman closer to my age, but she said she had read the books as well; the friend she was with is in the middle of reading Looking for Alaska.

“How was it?” Like so many fans, she was worried about how the book would adapt to film. I assured her that it was really faithful to the book and worth watching.

TFIOS, like how Hazel describes An Imperial Affliction, is a book that fills its fans with “this weird evangelical zeal, and you become convinced that the shattered world will never be put back together unless and until all living humans read the book.”

They just need to worry about the tissues. They won’t be OK, but that’ll be true to the book they read.