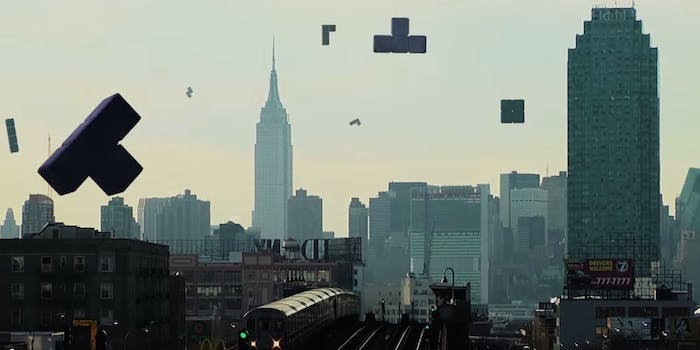 Someone actually wants to make a Tetris movie

I wonder who will play the L-shaped piece.

We’ve already seen real, live-action films based on the board games and video games we played as kids, but now a beloved (albeit frustrating) game is the next in line to get the movie treatment.

The classic ’80s game Tetris—the one that managed to haunt your nightmares with visions of blocks—is now being developed into a live-action film, according to a report from the Wall Street Journal.

Threshold Entertainment is teaming up with the Tetris Company for the project. Though there currently isn’t a director, cast, production date, or a release date, there is a plot or at least some idea of one.

“It’s a very big, epic sci-fi movie,” Threshold CEO Larry Kasanoff told the Wall Street Journal. “This isn’t a movie with a bunch of lines running around the page. We’re giving feet to the geometric shapes.”

Kasanoff, who’s best known for adapting the Mortal Kombat to film, has bigger plans for Tetris, much of which depends on the success of the film. That could possibly include “location-based entertainment based on the epicness.” Kasanoff notes, “Brands are the new stars of Hollywood.”

A Tetris movie already exists, at least in the world of elaborate YouTube parodies. Many tried their hand at turning the video game into a movie concept—possibly in part to poke fun at Hollywood’s attempt to turn anything into a movie. Here are just a few:

Of course, you could always just turn it into a horror film where you get sucked into the game and have to avoid being crushed. The possibilities are endless, but that doesn’t always guarantee success.

H/T The Verge | Photo via Warialasky/YouTube