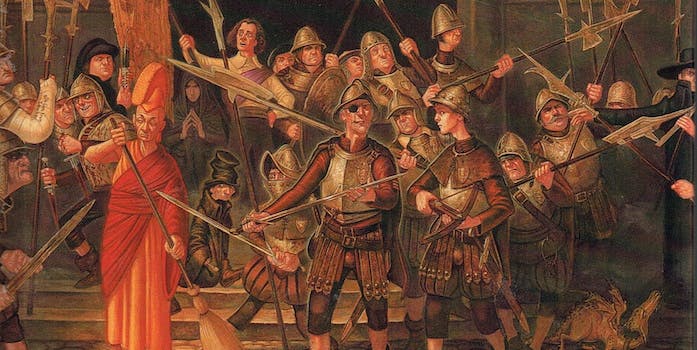 At long last, Terry Pratchett‘s Watch books are getting a TV adaptation. BBC America just greenlit an eight-episode miniseries from writer Simon Allen (The Musketeers) and a team of producers from BBC hits like Luther and Doctor Who.

Set in the fantasy city of Ankh-Morpork, the Watch novels are one of the most popular strands of Pratchett’s Discworld series. They’re also the most well-suited to TV adaptation, because they’re about an urban police force, and therefore technically qualify as a crime drama. (The books don’t really focus on traditional crime-solving stories, but we’ll have to wait and see how this pans out in the TV version.)

BBC America’s announcement describes The Watch as a “punk rock thriller,” which sounds a little different from the satirical fantasy tone of the books, but hey, this is just a press release. It also doesn’t specify any particular book, suggesting this is a generalized City Watch series rather than a direct adaptation. The synopsis does hint at time travel though, which could mean some element of Night Watch is involved:

“This disruptive, character-driven thriller centers on Terry Pratchett’s misfit cops as they fight to save a ramshackle city of normalized wrongness, from both the past and future in a perilous quest.”

The press release singles out an interesting cast of core characters. Captain Sam Vimes is obviously the first name, since he’s the protagonist of every Watch book. Then we have his wife Lady Sybil Ramkin, his naive yet heroic protege Carrot, the werewolf Angua, and the forensics expert Cheery Littlebottom, who is described here as nonbinary. (In the books, she’s a dwarf who publicly identifies as female, a rebellious move in a culture that only uses male pronouns. However, her role is widely interpreted as an allegory for trans and nonbinary identities, so this isn’t wholly unexpected.)

Read more: Everything we know about Amazon’s Good Omens miniseries

There’s no mention of other familiar Ankh-Morpork characters like Nobby Nobbs, Sergeant Colon, Detritus the troll, or Lord Vetinari, but we assume they’ll be in the supporting cast. It looks like the TV show may emphasize the female characters more than the books ever did, which is probably a smart move.

After some rather dubious comedy/fantasy adaptations of other Discworld books, this is exciting news for Pratchett fans. And since the BBC hasn’t announced any further details, you still have plenty of time to argue about your dream cast for the show.