10 alien reptoid celebrities who are taking over the Internet

As the much-anticipated Godzilla opens at the box office, it’s a good time to ask: Why is humanity so taken with the idea of invading lizards?

What if it’s because they’ve been among us all along?

For anyone familiar with wacky cults and conspiracy theories, the reptilian conspiracy may seem downright banal. But in truth, the belief that humanity has been living for thousands of years with a secret race of shape-shifting space alien lizards is less a conspiracy and more like a worldview—one an estimated 4 percent of Americans believe in. (Though we should note there is currently no way to gauge the percentage of Americans who answer poll questions ironically.)

When you open your eyes to the truth and realize that shape-shifting alien lizards, or reptilians, are among us, you realize that everything is connected. According to those who believe in the “Reptilian New World Order,” everything wrong with our world can be explained by the existence of evil overlord lizards who control their appearance by using high frequency vibrations to project holograms of humans from their liquid crystal skulls. These aliens have successfully infiltrated our world, albeit not without tireless opposition: 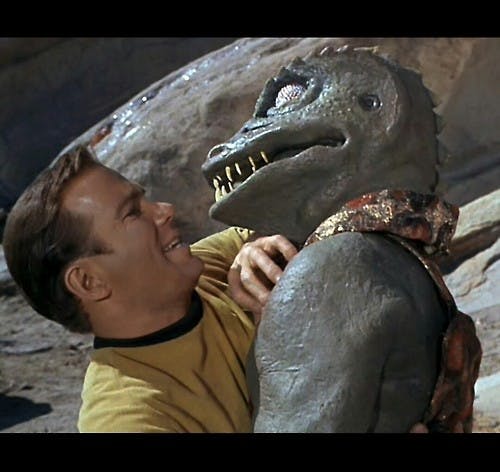 Reptoids have been blamed for everything from 9/11 to the disappearance of Flight 370 to causing homosexuality. Believers generally consign the storied existences of Freemasons and Illuminati to be the secret order of the reptoids, who have infiltrated their way into the higher echelons of human society and now virtually control every major social institution in the world, masquerading as kings and queens, political figures, and celebrities. Then again, the reptiloids also abduct and possess regular humans, so you could be a reptiloid yourself and never know it.

If you’re tied to a wealthy family with a long lineage, or if you find your route to success surprisingly easy, chances are you might be a reptile—or at least in league with one. Here is a list of our favorite reptilian overlords, to help keep you on your guard.

Why: Racism, mainly—which is weird because most of the alien reptiles in power, as you’ll see from the remainder of the list, are white. But reptilian believers have gone to great lengths to argue based on numerous “animal”-like physical traits, as well as his powerful status, that Obama is the scaliest reptilian of all. Also, he apparently has a suspiciously “rhythmic and musical” speech pattern. Then again, you already knew everyone on your high school debate team was an evil lizard.

Who: A lizard, probably.

Why: Well, just look at him. 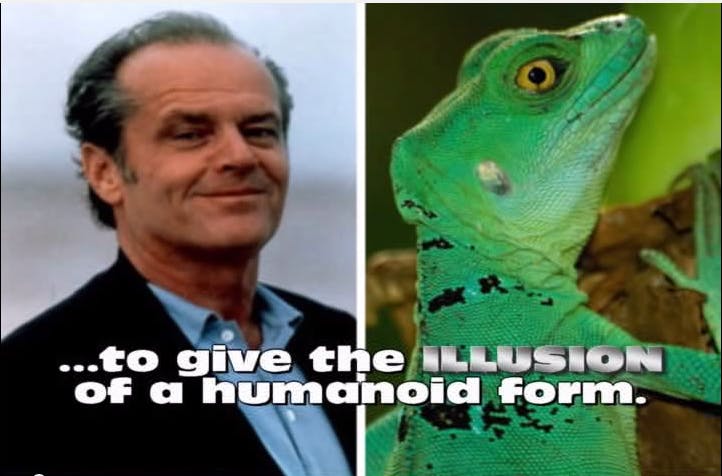 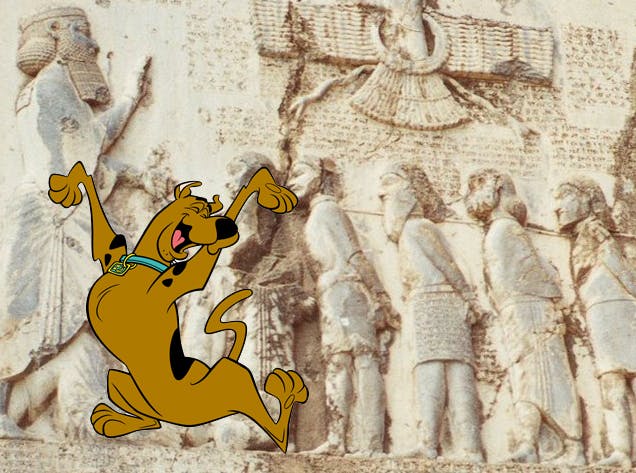 Who: Beloved Great Dane, leader of the Gang, preventer of dastardly criminals who otherwise would’ve gotten away with it

Why: According to his own series, Scooby Doo is actually descended from an ancient race of other-worldly Sumerian gods called the Annunaki, who communicated to their followers by taking the form of animals. But the Annunaki are also the same Mesopotamian deities who were actually early alien visitors, according to a popular theory started by new age philosopher Zecharia Sitchin. Sitchin mistranslated Sumerian in order to argue that the Annunaki visited earthlings from the planet Nibiru to interact with Sumerians at least 8,000 years ago. The truth, according to Sitchin, was out there. (Way, way out there.)

Why: Tesla was keenly interested in interstellar communication. Several times over his long and celebrated career, he expressed hope that he was on the trail of establishing communication with Mars. Like many scientists, he was certain that we could not be alone in the universe, and that the discovery of extraterrestrial life would create “the foundation for a universal brotherhood.” (So basically Tesla also invented Star Trek.)

But the connection with the reptoids really got started when Tesla’s long-time apprentice and assistant, Arthur Matthews, wrote a book 30 years after his death called The Wall of Light: Nikola Tesla and the Venusian space ship, the X-12.  In the book, which reads like a glorified fanfic about his former mentor, Matthews claimed that Tesla had always thought he was from Venus. Matthews claimed to have received visits from “Venusians” who took him to visit their home planet as well as Mars. The Venusians also told him that Tesla had been born on their space ship. Over the years, Matthews’ story has been used to argue that the Venusians were obviously the Sumerian reptile aliens, making Tesla one of them.

What do you think? Brilliant scientist ahead of his time, or futuristic space traveling reptile? 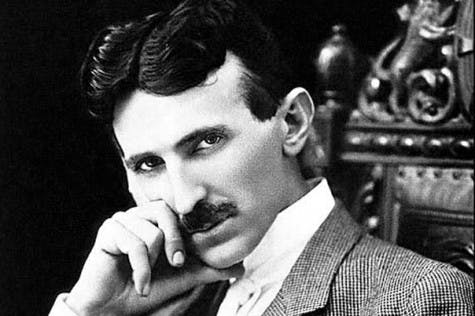 That all changed when he was implicated in the murder of his ex-wife, Girly Chew Hossencofft, a Malaysian immigrant who had come to America to marry him. After years of domestic violence in which he threatened to kill her numerous times, Diazien became consumed with rage after Girly Chew divorced him. So he took the most logical route to dealing with her:

He convinced his new girlfriend, a woman named Linda Henning, that he was a rogue alien lizard working to expose other evil reptoids—and that Girly Chew was the biggest.

Henning was a UFO believer who once referred to herself as an “alien queen.” She also told a friend that when she and Diazien made love, they would transform into cat people. She’d only known Diazien six weeks before he convinced her to help him kill Girly Chew for the good of mankind.

Why: While Henning later claimed that reports of her reptoid zealotry were greatly exaggerated, Diazien Hossencofft gave chilling witness-stand testimony revealing himself to be either deeply disturbed or deeply committed to his evil lizard facade. At various points, he claimed to be an immortal alien from another planet, and stated that Girly Chew’s murder had just been “practice before the climax with the alien ‘New World Order.’”

Then again, he also told police he really just wanted her dead. A lot. We guess it’s all apples and oranges when you’re an immortal alien reptile. 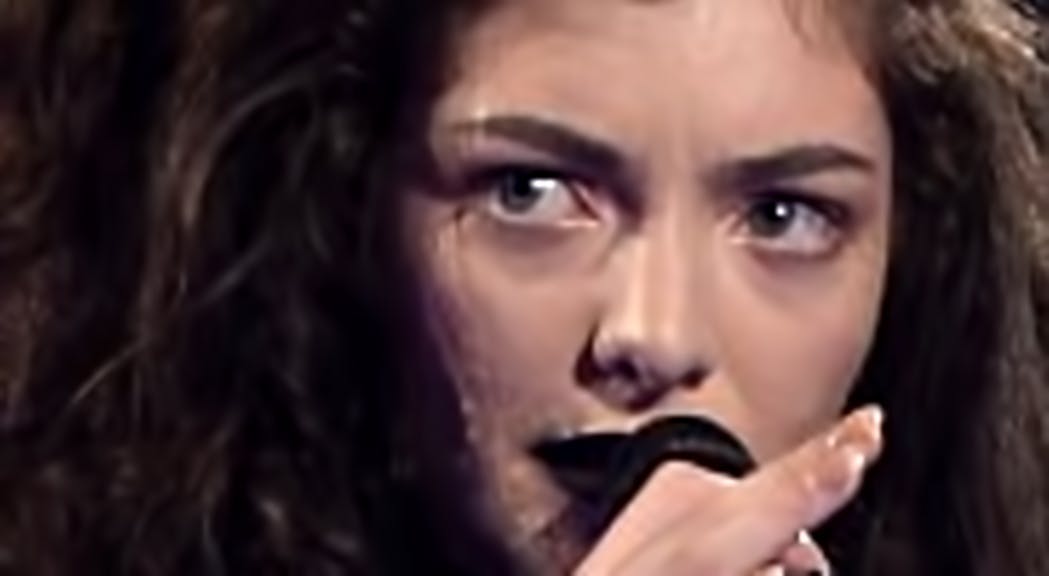 Who: Someone who’s secretly been a Royal all along.

Why: Lorde’s sudden rise to fame, high cheekbones, and older-than-her-years persona have sparked rampant speculation about her true reptilian identity.

I, for one, welcome our new reptilian overLorde.

Who: The beast of a thousand nicknames.

Why: According to the reptilian watch, the eyes don’t lie. Is anyone really surprised? 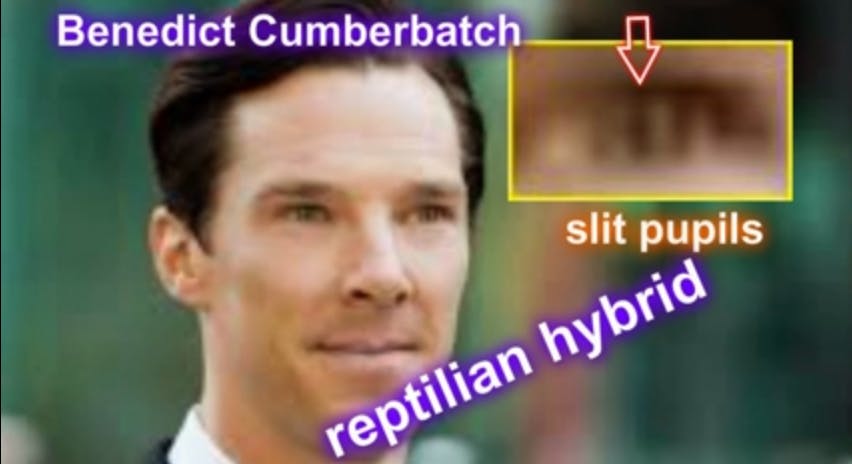 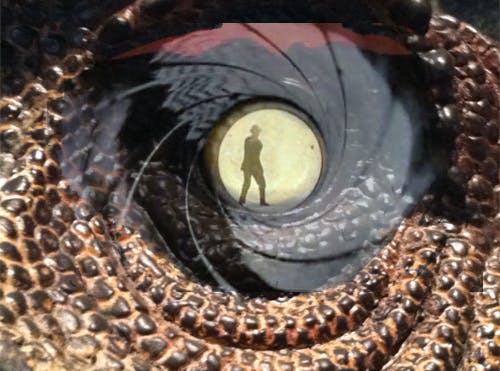 Why: Though we couldn’t find any verification on this one, RationalWiki insists that David Icke, generally acknowledged to be the creator of the reptiloid philosophy, believes that the first three James Bonds are of the reptilian conspiracy. Given that Connery’s name is an anagram for “on every screen,” clearly this is all the evidence we need. Mostly, though, we’re just wondering why Timothy Dalton got a pass from alien inspection: 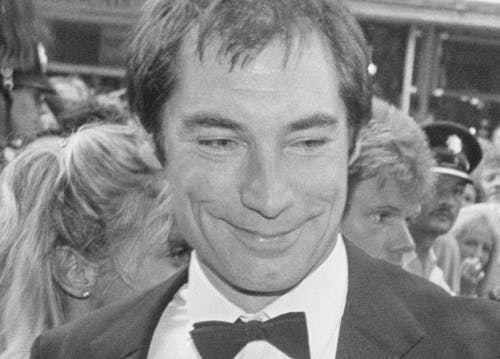 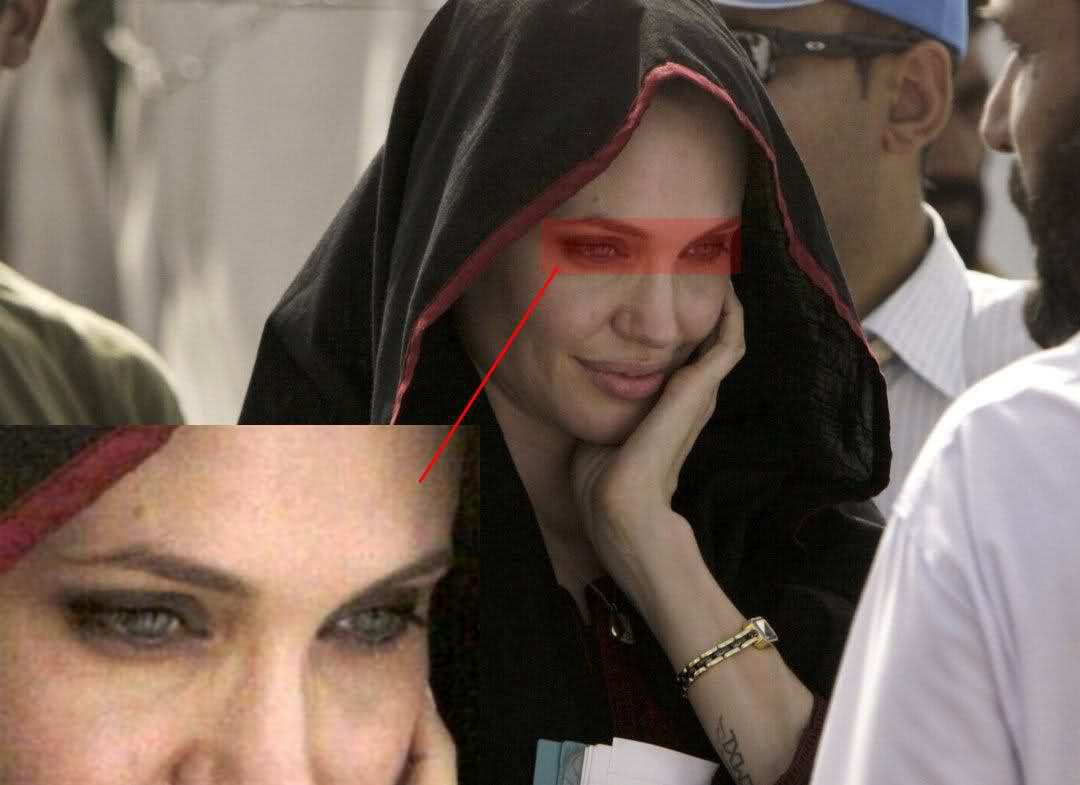 Who: Infamous man-stealer who uses her reptilian ways to work consistent magic at the box office.

Why: For years, Jolie’s edgy lifestyle has caused reptoid believers to cite her as one of the world’s most prominent reptilians. A recent outing in which Jolie appeared with white powder on her left cheek drew new alarm. Though it was probably just a highlighter mishap, alarmists attacked her for everything from sacrificing a goat to Satan in order to win Brad Pitt’s affections to trafficking drugs and sex for a secret society in exchange for a pristine public image.

Jolie’s Buddhist tattoo lends itself to the speculation: “May your enemies run far away from you. If you acquire riches, may they remain yours always. Your beauty will be that of Apsara. Wherever you may go, many will attend, serve and protect you, surrounding you on all sides.”

Angelina also voiced a creature in Beowulf where she appears sporting a full-length reptilian tail. And who’s about to appear as a shape-shifting dragon in the upcoming Maleficent, again?

In the words of “HeWhoKnows:” “Her father is bloodline. She is one of us.”

Who: That dorky kid from Channel One.

Why: Does this really need explaining? He’s a Vanderbilt, one of the oldest reptilian families of all. But for those of you who still require proof, you’re in luck. The Internet can’t stop talking about Cooper’s reptilian origins: 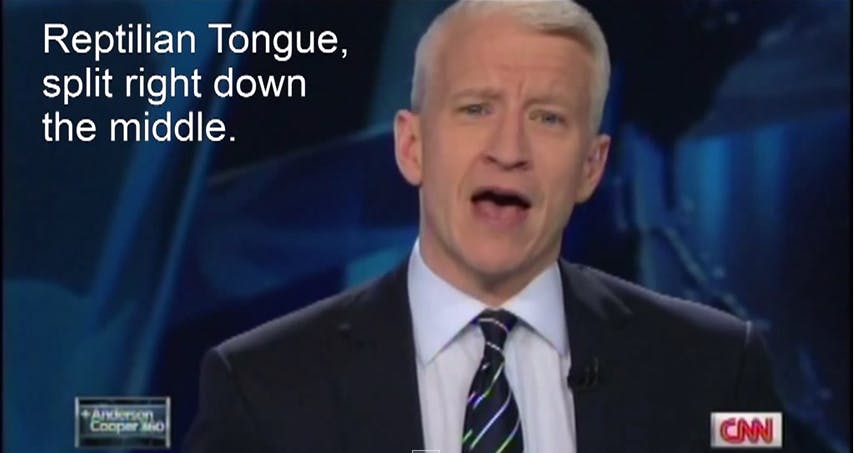 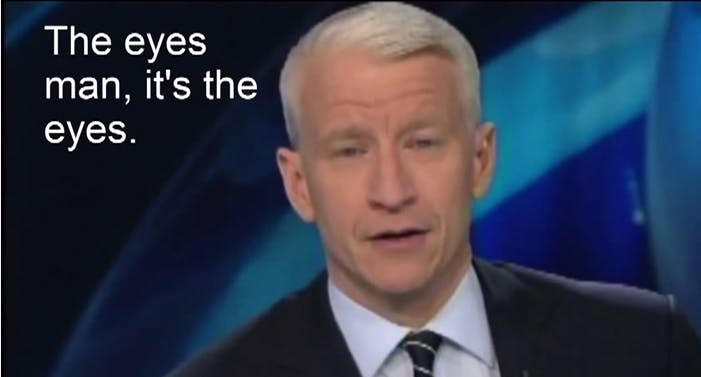 For those of you still in doubt about how to spot a shape-shifting reptile alien overlord, the Internet has plenty of guides to help you see the truth. (Spoiler: the truth mostly involves bad pixellation, which means that basically, the Internet is a giant lizard.) But be careful! Because the aliens are so good at their infiltration, you could be a lizard and not be aware of it.

If you start to notice yourself blinking sideways, growing scales, or breathing fire, you might be a lizard. However, if you haven’t been offered a position of extraordinary power lately, you’re probably one of the benevolent reptiloids who just want to be loved.

But if you think you might be slightly evil, fortunately for you, world power is within your grasp.