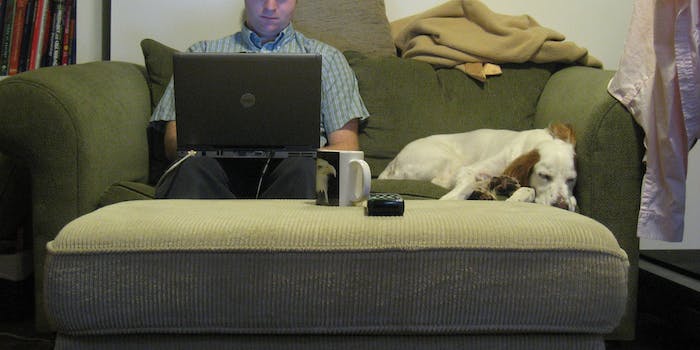 It's turning you into an unproductive hermit.

Those of us who have lived that #workfromhomelyfe know the joys of working from your couch, in your pajamas, covered in potato chip crumbs. But a new report suggests it’s not as rosy as it seems.

After all if you’ve ever worked from home for an extended period, you know that sometimes you miss out on important information exchanged at the office. Or you know the searing pain of receiving that notification on your phone that forces you to put down the wine and open your laptop because it’s 8pm and the boss needs something right away.

According to the report, published Friday in the journal Psychological Science and the Public Interest, employees who telecommute can sometimes feel isolated from the office. They can also be less productive and struggle with time management, particularly if their skills and self-motivation are already lacking. There is also the isolation factor. People who telecommute may suffer from a bit of cabin fever and feel deprived of the casual workplace conversations that often foster creativity and learning. From the employer’s point of view, too much telecommuting can also cut down on innovation for this reason. But an important caveat was that face-to-face interactions were important at the outset of a project, but once the project was well into the development phase, in-person communication became less crucial to productivity.

The researchers found that, for most people, telecommuting is great when done in moderation and when the employee is the one who primarily dictates their schedule. It can also greatly reduce stress considering how hellish morning commutes can be. But telecommuters may not necessarily reduce greenhouse gas emissions by staying off the road. The researchers pointed to some studies that noted telecommuters actually drove more daily miles than non-telecommuters. They suggested that this may be due to running more errands independently, instead of tying them into the work commute.

These results don’t totally apply to people who work entirely from home, where the employer-employee relationship is fundamentally different.

Photo via Logan Ingalls/Flickr (CC BY 2.0)