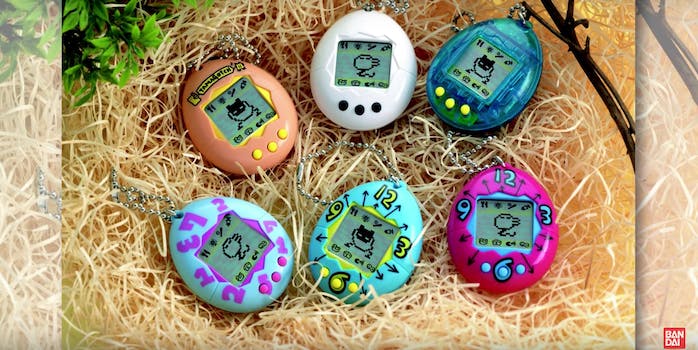 Tamagotchi are making a glorious comeback

If you’re a young adult who remembers the electronic pet craze of the mid-1990s, brace yourself: Tamagotchi are back.

Kids sold their parents on the egg-shaped electronic pets back in the day claiming they would teach them “responsibility,” but really we all just wanted one because they were new and cool. Little did we know we were signing up for near-constant tending to keep our pixelated buddies from dying in a pile of their own poop.

Though many of us have graduated to cleaning up real poop produced by our pets and/or babies, there’s no doubt Tamagotchi still have a place in our pre-teen hearts. Fortunately Tamagotchi creator Bandai is the latest company to jump on the ’90s nostalgia bandwagon that’s bringing back everything from DuckTales to the classic NES. It even has a whole new generation of Hatchimals-obsessed kids out there to hook.

The new Tamagotchi, based on the original 1996 version of the toys, are only available in Japan for now, selling on Amazon Japan for 2,000 yen or about $18. They come in a variety of colors, and just like the originals, there are a number of different animals to hatch.

Just don’t be too hard on yourself when you end up letting it quietly beep to death in a drawer when you remember how annoying it is.